In a life-changing decision, sick of being able to only bark orders at her team, Heather had Roger Bochs and Madison Jeffries create a copy of Guardian's electromagnetic battlesuit from the remains of Delphine Courtney, and Heather wore the same costume over it that her husband had worn. Having kept this project secret, Heather surprised Puck by joining him in a training exercise, observed by both Bochs and Jeffries. Heather’s poor eyesight proved a liability when she lost her glasses during the exercise and narrowly avoided several bombs that exploded near her. When it became clear that Puck was not happy with her for taking this action, Heather explained that she 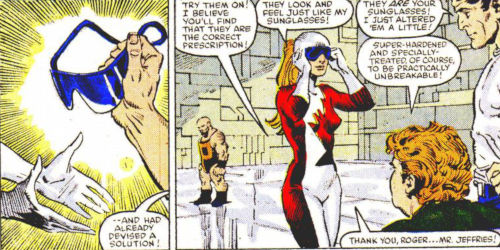 wanted to share in the dangers into which she sent her team. To solve the problem with her glasses, Jeffries and Roger developed a special pair of goggles for her to wear.

Getting no help from Puck, who had secretly developed feelings for Heather and did not want the woman he cared for her placed in even more danger, Heather left Tamarind Island to find someone who would help train her in combat techniques. [Alpha Flight (1st series) #32]

Confident with the battle suit's flight capabilities, Heather flew to the home of the X-Men in Westchester, New York, hoping that Wolverine would train her. Unfortunately, Heather had not thought to phone ahead and was mistaken for an attacking foe, leading Magneto (who was currently allied and staying with the X-Men) to fire a magnetic bolt, knocking her out of the sky. When she woke, Wolverine drove Heather to a private part of Xavier's estate for a private talk, where Heather asked Logan to train her. When Logan seemed to reject her request, Heather leapt out of the car, wondering why she thought he would be different from her teammates. Wolverine 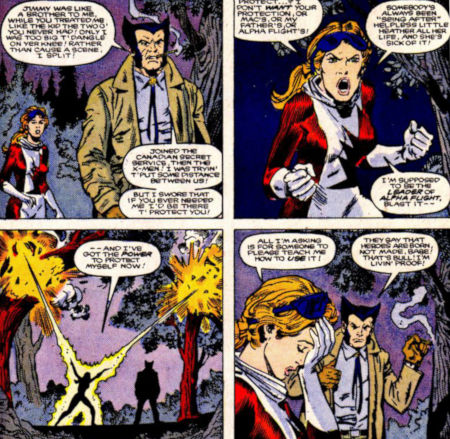 followed and quickly caught up to her, explaining that she had misunderstood. Talking, the two reminisced about the time Heather had found Logan in the wilderness years before and nursed him back to health, leading to him joining Department H in the first place. Heather was then shocked to learn that Wolverine left both the Alpha Flight program and Canada because he could not be with her. Her shock turned to anger when Wolverine told her that he would always be there to protect her. She didn't want protection, she told him, she wanted someone to help train her to use her power.

Wolverine was still torn about whether to train Heather or not – but he and Heather soon had other matters to worry about when they were confronted by Lady Deathstrike and a group of ninjas. Deathstrike’s father had created the adamantium bonding process that had been used to fuse the alloy to Wolverine’s skeleton and, in her twisted logic, she intended to retrieve her father’s stolen property from the X-Man. Deathstrike’s words triggered Heather's memory and she remembered seeing a file about the process on Mac's desk. This led Heather to believe that perhaps it hadn’t been a coincidence meeting Wolverine the way she had in the woods, where she and Mac had been on their honeymoon. Motivated both by possible guilt and the urge to save her friend, Heather struck with her suit blasts against the ninjas, receiving on the job training as she handled the large number of ninjas while Wolverine battled Deathstrike. In the end, Heather proved instrumental in Deathstrike's defeat when the villain slammed her sword against Heather, whose electromagnetic shield shattered the sword. Possibly feeling vindicated in her own abilities to defend herself, Heather decided she needed no protection and dubbed herself Vindicator. [Alpha Flight (1st series) #33-34]

Returning to Canada, Heathers leadership of Alpha Flight continued and she found herself feeling more adequate as the team's leader, despite the tragedies that her teammates endured, such as Snowbird's baby being possessed by a malevolent entity, Shaman being forced to strip his daughter of her power to become the new Talisman and a mysterious illness that started to affect Northstar. During all this, however, Heather seemed to be oblivious of the strong feelings that Puck had for her. [Alpha Flight (1st series) #35-38]

Around this time, Alpha Flight discovered that Gary Cody had bugged Mansion Alpha and was spying on the team. Heather destroyed some of the equipment and warned Cody that he and the government were to keep out of Alpha Flight's affairs, or the deal they had was off. [Alpha Flight (1st series) #39] Shortly after, Vindicator led a unanimous decision by the members of Alpha Flight to include Madison Jeffries, who had been unofficially assisting with the team for months, as a full-fledged member. Further, when a young mutant called Purple Girl came into conflict with Alpha Flight, Heather agreed with Madison Jeffries' proposal to re-start Beta Flight and assured Purple Girl's mother that Alpha Flight was best equipped to help train her daughter in the use of her powers. [Alpha Flight (1st series) #41-42]

Vindicator's biggest challenge yet as leader of Alpha Flight came when Snowbird and Shaman located Pestilence, the malevolent entity that had possessed Snowbird's baby. Pursuing the entity, Vindicator led Northstar, Aurora, Puck and Jeffries to an old mine, where they were subjected to an array of horrors created by Pestilence. The horror that Heather had to face was projections of the men who cared for her and loved her – Mac, Wolverine, Puck and then, to her surprise, Jeffries. Heather blasted her way through them and was able to rescue Puck, who had been injured in a cave-in. She performed mouth-to-mouth to resuscitate her apparently non-breathing teammate but there had been no need, since he had merely been practicing yogic breath control while buried. Still, her concern caused Puck to ask if she could love him, a question Heather did her best to sidestep as they were still on a mission.

Unfortunately, the mission went from bad to worse. Already possessing Snowbird’s baby, Pestilence longed for a more powerful host, namely that of Snowbird herself. Gaining control of 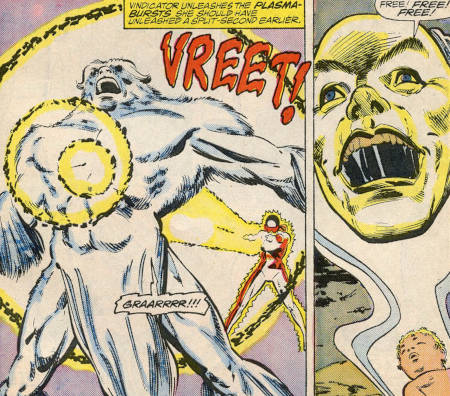 her through her Sasquatch form, Pestilence ordered the goddess to slay her son and thus freeing him to possess her. Despite Talisman’s warning that the death of the infant would free Pestilence, Heather hesitated, unwilling to strike at her teammate. Only after Snowbird killed her own son did Heather fire, in turn killing Snowbird. Though Pestilence was denied Snowbird as a host, he was free… and both Snowbird, her husband and her son were all dead. Returning to Mansion Alpha, Vindicator wept for the action she was forced to take. [Alpha Flight (1st series) #44]

The triple tragedy of Snowbird and her family were mitigated somewhat by the return of an old Alphan, Sasquatch. Having lost his body weeks before, Walter Langkowski’s spirit had roamed until it found a new home in the body of Snowbird. However, while Walter Langkowski utilized Snowbird’s Sasquatch form, he was also stuck with her feminine body and was now a woman, effectively becoming Wanda Langkowski. [Alpha Flight (1st series) #45-46]

Despite their long estrangement, when Heather received a phone call from her parents asking for help, she returned home. Their reunion was initially awkward, as Claire and Ramsey both seemed to return to their old arguments regarding costumed super-heroics, but even they had to admit

their hypocrisy in calling on their super-hero daughter now, at a time when the local authorities were not able to handle the crisis taking place in their town. The issue was regarding local children who had disappeared without a trace. Though it seemed more an issue for local Royal Mounties than a super-hero, Heather agreed to investigate.

As the two drove around town, Heather and her father started to bond, healing their fractured relationship. By happenstance, they noticed a bicycle on the side of the road and stopped to investigate. As Heather flew off to scout around for the bike’s owner, her father noticed odd seed-pods which littered the road. When he touched one, it came to life, attacking him and transforming him into a tree-like being, which then marched into the woods to join other such beings. By the time she returned to the car, Heather’s father was gone, but the alien seed-pods were still there and they attacked her, as they had her father. Fortunately for her, the Vindicator battle suit was a match for the seed-pods, though just barely. Realizing that the pods had something to do with the disappearance of the local children and her father, Heather flew into town, just as the host of transformed humans were attacking. Using her plasma bolts on the creatures, Heather discovered she was able to burn away the alien matter, freeing the missing children and her father. [Alpha Flight (1st series) #47]

Though she tried her best to hold the team together, Heather found that Alpha Flight was as beset by tragedy from within as without. Worse, she was unable to prevent any of it. First, the physically unstable Roger Bochs merged with the mentally unstable Lionel Jeffries to become the creature known as Omega, then an expedition to Ungava Bay to find a cure for Northstar's illness ended with Northstar, Aurora and Puck not returning at all. With only herself, Sasquatch and Madison Jeffries (now having assumed the Box identity) as members, Heather could not help but contemplate the future of her Alpha Flight. [Alpha Flight (1st series) #48-50]

Nevertheless, Heather worked all the harder to forge what remained of Alpha Flight and her burgeoning Beta Flight into effective teams. The opportunity to demonstrate their teamwork came when government liaison Gary Cody arranged for a mock invasion of Tamarind Island by the Canadian military. Heather’s Alpha Flight proved more effective than Cody had anticipated, so much so that he grew concerned about the power Alpha Flight possessed and whether Heather would not fall in line with what the government wanted. [Alpha Flight (1st series) #51]

When Alpha Flight was sent to Antarctica to locate some missing Canadian scientists, Heather’s battle suit was struck by lightning and short-circuited, causing her to fall into the Savage Land below. Rendered not only powerless but amnesiac, Heather did her best to evade the both local fauna and native primitives. However, she when she encountered three local primitives whose traits branded them genetic misfits from the normal locals, Heather freed them and together escaped into the jungle. Heather’s leadership instincts quickly kicked in and she turned the trio into a formidable fighting team she called them Alpha Prime. After but a few weeks, Heather led 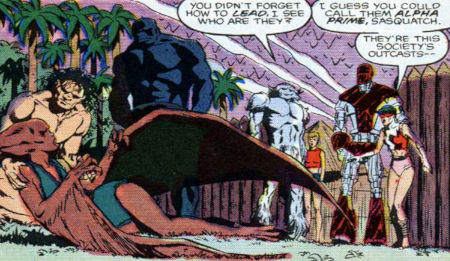 her team against the local tribe in rebellion and warned them that they could either accept these individuals and the gifts they possessed, or reject them and suffer for it. Soon thereafter, Heather was found by her Alpha Flight teammates, who had been looking for her for weeks. Finally remembering who she was after seeing them, Heather left her newfound friends in Alpha Prime in the Savage Land as she and her teammates returned home. [Alpha Flight Annual #2] 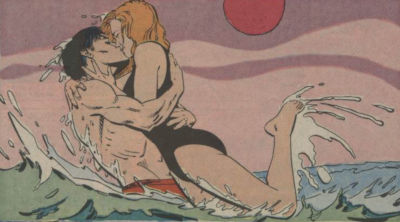 By the time of the anniversary of Mac’s death, Heather was a changed woman, finally at peace with life. As team leader, she had made it through the problems of the team assembled by her husband, creating her own team which had formed into a stable unit. She also gave in to the hints that Madison Jeffries had given her about his romantic feelings for her and the two began a relationship. [Alpha Flight (1st series) #52]