The near invasion of Canada by an extra-dimensional army had not gone unnoticed and the government soon convened another parliamentary panel to discuss Alpha Flight’s status. The 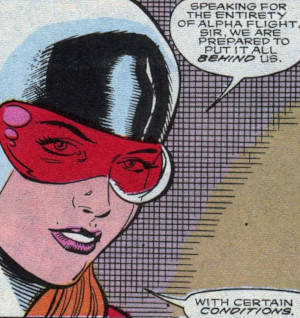 hearing was attended by various government official, including not only General Clarke but the prime minister himself. It became clear quickly that the Canadian government and Alpha Flight were both determined to set aside the problems between them, but Heather had conditions. Though General Clarke argued that Vindicator not be dictating conditions to the government, Heather's request was simple – for Alpha Flight to once again be free of government intrusion. In the end, the prime minister rescinded all sanctions against Alpha Flight, enabling them to act as operatives of the peace once more. Additionally, he announced that Department H was being re-established as a fully-funded government organization to support Alpha Flight’s activities.

Not all of the government’s decisions were welcome, though, as Gamma Flight objected to being downgraded to a training role under Alpha Flight’s supervision. The decision enraged Gamma member Wild Child, who went berserk, assaulting a teammate and fleeing. When Wolverine, an old adversary of Wild Child, came north to help bring his old foe to justice, Heather and he reconnected. His words of encouragement at the end of their hunt inspired Heather to forgo her role as a “vindicator” and fulfil her husband’s legacy by becoming a “guardian” to the country. As such, Heather changed her name to Guardian. 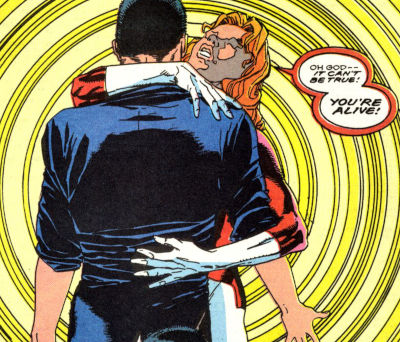 Such an emotional step forward for Heather cold only have been followed by an accompanying step backward. When the rest of Alpha Flight returned from a mission to the States dealing with RoXXon, Heather received the shock of her life when they brought back James MacDonald Hudson, alive and well. Unbelievably, the elaborate and convoluted story Delphine Courtney had used so long ago to explain his return while pretending to be Mac turned out to have been true.  Courtney had gotten the story from RoXXon, who had been holding Mac for well over a year. Overjoyed, Heather embraced, her husband.

Two days later, during the ceremony in the House of Commons, Heather addressed the prime minister, parliament and the whole country, re-affirming Alpha Flight's dedication to serve and protect Canada – and the world. [Alpha Flight (1st series) #87-90]

Though he was back, Mac was changed, both physically and mentally. As with Delphine Courtney’s story from so long ago, he was now a cyborg of human tissue and alien technology, as much man as machine. His personality and very thoughts seemed to reflect his new status. Heather was also unsure about how she felt about the return of her husband emotionally, considering she was technically still engaged to Madison Jeffries. Additionally, in the short time since he had returned, he had not only joined Alpha Flight but donned a new battlesuit and taken Heather’s old name as Vindicator, a name that Mac had himself also used years before.

Following a training session in which Mac’s cold, analytical demeanor had frustrated her, he walked in her while taking a shower, not taking into consideration her feelings and their current relationship. Bluntly, he informed her that General Clarke, the military's liaison to Department H and with whom Heather had butted heads at the most recent parliamentary hearing, had already approached Mac, telling him he wanted Mac to be leading Alpha Flight. Understanding that Mac was trying to warn her, Heather replied that she didn’t need him to protect her. Responding that he knew, Mac countered that he may need her to protect him. Moved by his display of emotion, Heather kissed Mac. With that, Heather and Jeffries' relationship quietly ended, and Jeffries re-established his relationship with Diamond Lil. [Alpha Flight (1st series) #91-92] 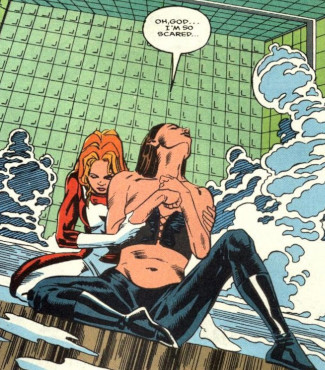 As the new Department H was finally established, Heather had to deal with some personal issues amongst her teammates, like finalizing the official Alpha Flight team. Longtime Beta Flight member Purple Girl, now called Persuasion, appeared bitter that she was passed over for full Alpha Flight membership, causing some tension between the two. Unexpectedly, Heather found a moment to bond with Diamond Lil when she found her hiding in the showers. Pressing for the cause of her obvious distress, Heather learned that Lil had just found a lump in her breast. Putting aside their previous trouble, Heather promised that they would do whatever it took to stop it. Eventually, the lump would prove benign but Heather’s outreach to Lil would never be forgotten. [Alpha Flight (1st series) #95]

The stakes quickly rose for Heather and Alpha Flight when the entire team became embroiled in a cosmic war. Fleeing from a group of aliens called the Consortium, the cosmic entity known as Her had fled to Earth to seek of her allies, the Fantastic Four. However, crash-landing in Canada instead, she got Alpha Flight, who promptly offered her sanctuary. Furious at Her for having disrupted their financial interests when she had innocently helped an alien civilization, the Consortium’s rage fell on Toronto. Fortunately, Alpha Flight was not alone in protecting the capital, as the Avengers soon arrived to assist their northern allies. During the battle in Toronto, Heather and her American counterpart, Captain America, debated the cost of Alpha Flight's promise to save Her, a single entity, from the Consortium. Despite the continued danger to Toronto from the Consortium's army, Guardian did not want to give up on Her, even when she offered to hand herself over to the Consortium.

Before that could happen, Vindicator received a transmission from the Quwrlln, the aliens who had been responsible for saving Mac and rebuilding him. The Quwrlln had long feared the Galactus and were now in great danger that the world-devourer had found them. Desperate for assistance, the Quwrlln used the technology within Mac to teleport a group of Alphans, including Heather, and Avengers to Quwrll.

Despite her frustration at the Quwrlln for not only kidnapping them but returning her husband half a man, she resigned herself to the fact that their decision was obvious – they had to stop Galactus no matter the cost. At first the heroes seemed no match for the world-devourer but, when the now-robotic Mac saw Galactus holding Heather in his clutches, his human side took over and he struck a powerful surge of electromagnetic energy that not only freed Heather but toppled Galactus. As the heroes discussed what to do and how to deal with the Consortium, Galactus proposed a bargain.

In exchange for the planet Qurwrll, Galactus would accept one of the Consortium’s mother ships, which were renowned for using living planets as their energy source. To make the exchange, a trans-dimensional warping device was created that would shunt the planet Quwrll to safety, while simultaneously summoning the Consortium's mother ship. Unfortunately, a specific energy source was required to activate the device, one that only Guardian and Vindicator could provide with their battlesuits. Worse, both Alphans would not survive the process. Though for Mac his sacrifice was merely logical, Heather was willing to sacrifice herself for the greater good. After sharing a brief moment with Jeffries, Heather linked hands with Mac to combine their powers and activate the trans-dimensional warping device. 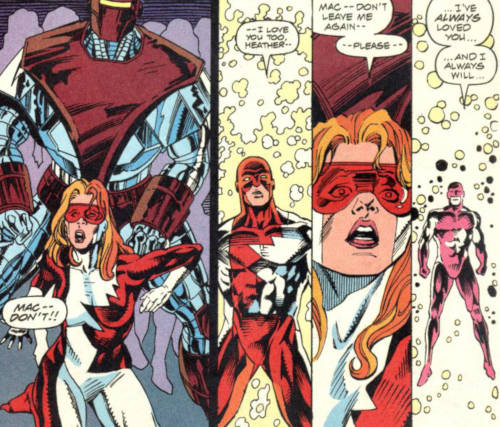 Just as the device began to operating, though, Mac startled Heather by pushing her away, vowing to finish the machine’s operation himself. As Heather pleaded for him not to leave her again, Mac told Heather that he would always love her and then activated the teleport, shunting the heroes back to Toronto. They arrived just as the Consoritum ships had vanished. Having lost her husband a second time, Heather fell to her knees in tears. [Alpha Flight (1st series) #97-100]

Heather and Puck visited Mac's original grave site, where Heather found some comfort in the fact that this time her husband's death meant something. His previous death had seemed so senseless and was never spoken of publicly, while the billions he had now saved had made him a public hero. Even General Clarke stopped by to pay his respects and to let her know that now, more than ever, the Canadian government was throwing its support behind Alpha Flight and Department H. The rest of Alpha Flight later joined Heather at the grave site for a more ceremonial memorial. [Alpha Flight (1st series) #101]

Deciding to concentrate on managing the team in the field, Heather took a backseat from administrative matters at Department H, the job soon falling to Windshear due to his familiarity with corporate structure at RoXXon. The team was also restructured to a five person “Core Alpha” and the team donned matching team uniforms. [Alpha Flight (1st series) #104] In an attempt to build herself a life outside of Alpha Flight, Heather got herself an apartment central Toronto, providing her a place of sanctuary when she wanted to get away from Department H. [Alpha Flight (1st series) #105]

When the cosmic crisis known as the Infinity War gathered heroes from around the world, Guardian and the rest of Alpha Flight joined forces with the other teams to assist. However, during the conflict, Heather became troubled by thoughts of Alpha Flight's inadequacy compared to other teams, especially after participating in a squad that launched a direct assault on the cosmic villain called Thanos. Her old friend Wolverine was on the squad as well and he gave her some on-the-spot battlefield encouragement. [Alpha Flight (1st series) #110-111]

Later, returning to Canada, an offhand conversation with Windshear about being a “dad” to Beta Flight caused her to think about her marriage to Mac. Looking at his photo, she lamented the fact they never had children and thought a son or daughter would be a tangible reminder of him to hold at times like this. Through tears, she admitted to Mac that Alpha Flight was indeed Mac’s family and she promised him she would look after them. [Alpha Flight (1st series) #114]

Protecting Alpha Flight soon became a priority for Guardian when she learned about Robert Hagon's Super Power-Powers Bill, which was about to get a hearing in parliament. Heather was informed by General Clarke that Hagon wanted the enforced registration of all super-beings in Canada and that, with the current wave of anti-paranormal mania in Canada, the feeling on Parliament Hill was that the bill might pass. Guardian was warned that it was not time to rock the boat, as Hagon was trouble.

Following a dangerous battle against the Wrecking Crew that caused massive destruction, Heather began to wonder whether the Super-Powers Bill might be an appropriate measure. For outsiders looking in at super-powered beings, might they not surely feel safer with some form of control over the super-beings in place? As Guardian and her teammates debated the issue, they were approached by a young mutant named Albert Louis, who was being pursued by a group of armored mercenaries called the Hardliners. Employed by a man named Joshua Lord, the mercenaries were acting out the instructions of Hagon to bring Albert Louis in. When the 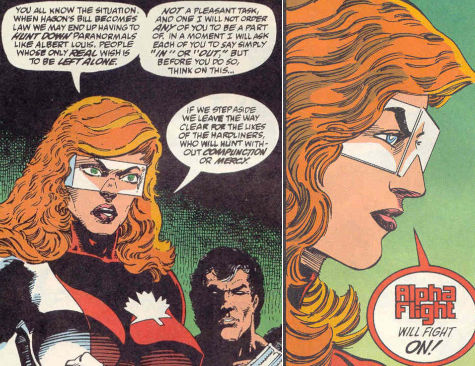 Hardliners confronted Alpha Flight, ordering them to turn him over to their custody, Guardian promptly remind them that the Super-Powers Bill had not yet passed. She then warned them that, as Albert Louis sought out Alpha Flight's help, they would give it to him. The Hardliners opened fire on Alpha Flight but Heather’s Guardian battlesuit countered with an extremely powerful surge of electromagnetic energy, disrupting all of the Hardliners' armor. In the aftermath, Guardian called a team meeting, where she vowed that, no matter whether the bill was passed, Alpha Flight would continue to act for those in need. [Alpha Flight (1st series) #118-120]