Note: contains only issues that are relevant to the plots, themes and characters from the Askani future, while the many other missions that Cable performs as a member of X-Force or the X-Men are left out. 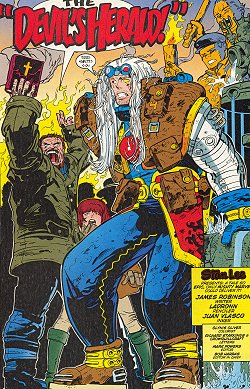 Ten to six years ago

Ca. 10 years in the past a mysterious man arrived in Scotland out of thin air. The locals, led by reverend Craig perceived him as a creature of hell; only Moira MacTaggert and her ward Rhane Sinclair showed some hospitality and invited Cable along. He telepathically convinced the crowd that everything was alright and that he was Moira’s visiting cousin. Once at Muir he telepathically learned english from Moira, who ran some tests on her visitor. The techno-organic virus flared up and overtaxed the lab equipment, Cable rescued Moira’s life as parts of machinery were crashing down. Cable filled Moira in that he was a timetraveler and that Xavier was a very important man in this era; he needed to meet him. Although she had not spoken her old love for several years, Moira told Cable how to contact the professor. Before he left, Cable erased Rhane’s knowledge of their meeting. [Cable #minus 1] [ Error : The story mentions Rhane Sinclair as Moira’s ward, yet Moira would only become her legal guardian several years later. ]

Cable traveled to the US and gathered information on Xavier before actually contacting him. Around the same time he had his first run-in with Wolverine who was still working for Canada’s Department H. Finally contacting Xavier, he helped him design the security systems for the mansion, and in turn was taught by the Professor how to get along in the 20th century. [Cable/Wolverine : Guts ‘n‘ Glory, Cable (1st series) #45]

In the following years, Cable founded a crack team of mercenaries known as the Wild Pack: G.W. Bridge, Domino, Grizzly, Kane, and Hammer. Cable worked alongside the Wild Pack (later called the Six Pack) for years, making occasional trips back to the future and at one point returning with his Graymalkin space station, where the intelligent system program Professor and the Time Displacement Core which governs his time-trips were located. [X-Force #8] 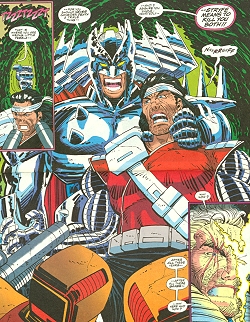 The Six Pack began frequently taking jobs from a mysterious client by the name of Mr. Tolliver, but they never saw him in person as they negotiated with people representing him. Tolliver set them up in Russia and pitted Cable against Stryfe, who each learned for the first time that the other was in the present day. The Six Pack did not want to fight as they weren’t getting paid for this battle, but Cable convinced his team that it needed to be done. They went on the run for months until a climatic battle with Stryfe over the Professor's data core and the Time Displacement core. Suddenly Stryfe grabbed Kane by the throat and demanded the data in exchange for his life, but Cable refused the deal. Hammer opposed him and decided to hand over the disk, but was shot in back by Cable. Stryfe teleported away, and Cable bodyslided to his ship to see if he could follow Stryfe, thus abandoning his team in the heart of an exploding underground base. Domino, Grizzly and Bridge got out in time, but Hammer was paralyzed and Kane became a paraplegic. Cable cut off all ties with his comrades. [Cable: Blood & Metal #1-2]

While Jean Grey was believed dead, Cyclops met a woman who looked exactly like her, namely Madelyne Pryor. Soon they fell in love and married. Little did they know that she was actually a clone of Jean designed by Mr. Sinister who wanted to combine Grey and Summers genes to create a being powerful enough to destroy his archenemy Apocalypse. Not before long his plan bore fruit, as Madelyne fell pregnant, and she gave birth to a beautiful baby boy named Nathan Christopher Charles Summers. Among the X-Men was also Rachel Summers, who was the daughter of Jean and Scott of an alternate future. Holding the baby in her arms, she swore to ever protect her little brother and established a psi-bond with him. [Uncanny X-Men #200-201] 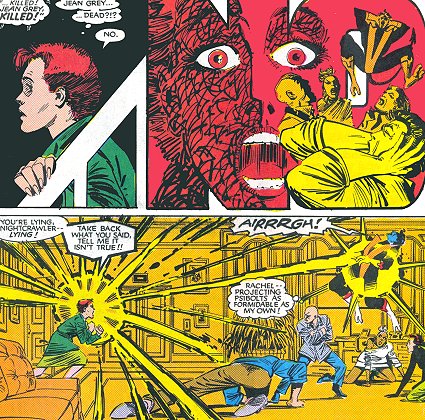 Apparently Apocalypse had known about Sinister’s plan, as he had his Riders of the Storm kidnap the baby several months later. He infected the boy with a techno-virus that was destroying his body cell by cell. X-Factor followed to his lunar base and battled Apocalypse and his forces. During the battle, a woman answering to the named Askani appeared through a time-portal, claiming to have come from nearly two millennia in the future to save Nathan Christopher. Indeed, she stopped Beast from trying to remove Nate from the power drainer he was in, which would have killed him instantly with a cosmic energy pulse. Instead, Askani took the pulse herself, shorting out the equipment she needed to safely use her time-portals. Askani told Cyclops and Marvel Girl that she had technology in her future that might be able to save Nathan, but her powers would most likely destroy her if she made another time-jump. Their choice was simple: let Nate die of the virus or never see him again. Cyclops chose to save him, and sent his only son into the future, fully aware that he would never know if the cure was successful. [X-Factor #66-68]

In the meantime, Stryfe had built the Mutant Liberation Front (MLF), a terrorist organization, around himself and Zero, while Cable assumed command of the New Mutants shortly after they parted ways with Magneto. [New Mutants #86,89]
To replace some departing members, Cable asked Domino to join the team and she did (or so it seemed as it was actually the shapeshifting Copycat who had taken her place). Domino arrived right on time to help Cable battle Deadpool, who had been hired by Mr. Tolliver to kill Cable, apparently still angry about the spoiled mercenary job in the past. [New Mutants #98]
Renaming the team to X-Force, Cable hunted down the MLF and their leader Stryfe, but again his archenemy could escape though Zero’s teleportation portal. [X-Force #1]
Garrison Kane resurfaced as the new Weapon X. Canada’s Department H had upgraded his body with bionic implants full of powerful technology and weapons. He too had a run-in with Deadpool and members of the MLF, when he was investigating a weapons deal. Kane was brought to Stryfe, and he got quite mad to see the villain who had destroyed his life. Yet anger changed to shock, when Stryfe took off his helmet to reveal Cable’s face underneath. Momentarily distracted Weapon X was easily defeated and rendered unconscious. When he awoke Stryfe and the MLF were long gone. [X-Force #2, 7, 9-10]
Copycat liked her role as Domino too much. Although she had infiltrated the team for Mr. Tolliver, she no longer mailed him her reports about the team’s activity, so he sent Deadpool after her. While most members of X-Force were away, he broke into their quarters and beat up Copycat to remind her of her duties. When the team returned they discovered Domino’s betrayal and still pretending to be the real Domino, she lied that she needed the money to pay for Hammer's operations. She agreed to Cable’s demands that she would lead him to Tolliver’s base in Italy. Once there Cable found the real Domino chained to a wall, she had been held captive by Tolliver for the better part of a year.

Copycat was surprised too, as she believed the real Domino dead. During the fight, Tolliver tried to escape with a helicopter, but Cable jumped aboard and set the copter on fire. He bodyslided to safety before the explosion, thus failing to notion Tolliver’s clothes and a latex face mask swimming in the ocean afterwards. [X-Force #10-15]

Alone, Cable investigated the MLF’s recent actions. They had been stealing various art objects, all somehow connected to Apocalypse. He returned to his safe house in the swiss alps, where he got attacked by Garrison Kane, demanding answers about his past. They fought; Cable ended up in a better position but he was shocked when Garrison revealed a hologram of the face behind Stryfe’s mask. They agreed to put aside their differences and hunt down Stryfe together, but they ended up captured by him and the MLF. History seemed to be repeating, as Stryfe threatened to kill Kane if Cable would not hand over the link to the Time-Displacement chamber. Cable and Kane chose to fight and Stryfe nearly killed Kane before teleporting away with Zero. This time Cable made the right decision; instead of going after Stryfe, he took Kane to the Askani future where his life could be saved and his implants were exchanged with superior technology. [Cable: Blood & Metal #1-2]