Before Events are similar to those of the timeline known as “Days of Future Past“. Out of fear of mutants, humanity had built mutant hunting Sentinels and some of their captives were brainwashed into hounds, whose purpose was to track down other mutants. Later on the Sentinels decided that the best way to protect humanity would be to rule it and conquered the country. Mutants were put in concentration camps and tattooed with the letter M over their right eye to easily identify them if they should escape. 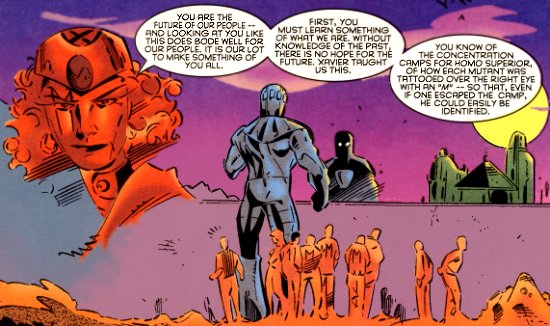 This may sound almost identical to the DOFP, but it is not the same timeline. In DOFP Sentinel rule was ended in 2015 (See Excalibur #66-67), here in Bishop’s future Sentinels ruled till ca. 2055. Also the face branding with the letter M is a new aspect.

Ca. 2055-2060 United by a Summers, humans and mutants worked together to overthrow the Sentinels rule. During this “Summers Rebellion“ many, including Summers him- or herself died, but finally the robots were defeated. (Bishop #3, X.S.E. #1).

Ca. 2060-2065 Afterwards mutants tried to move out of the camps (“The Emanzipation“) but they were met with the same prejudices as before. A radical group called Exhumes developed a hatred for humanity and started to raid and destroy their settlements.

The ruling council thought about a way to deal with the Exhumes. Having humans hunting mutants again was unacceptable as this could have been the beginning of another racial war, instead they came up with the idea of the Xavier’s Security Enforcers (X.S.E.). They were composed of mutant veterans and the difference was that now mutants were allowed to police themselves. Many X.S.E. officers had already fought in the Summers Rebellion and they decided to wear the M tattoo, formerly used to outcast them, as a badge of honor.

At first the mutant community perceived the X.S.E. as the new version of the governmental hounds, but over time the X.S.E officers earned public respect for what they were doing.

Ca. 2085 Bishop jumps back in time nearly hundred years (Uncanny X-Men #282 was released in 1992) and eventually joins the legendary X-Men. His presence during the Onslaught crisis prevents the X-Men’s death and changes or even erases the timeline. The particular effects are yet unknown since the timeline has not been visited after this point.