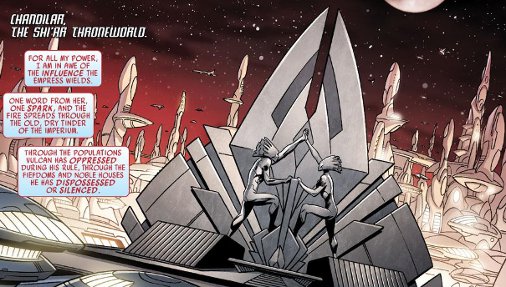 At the very center of the Shi'ar Empire is the Imperial Throneworld, Chandilar. It is an artificial planet that is the administrative hub of the empire from which the Majestrix or Majestor rules.

The Shi'ar race themselves originate from a planet called Aerie. The exact location of Aerie or if it still exists has not been revealed as yet. The term "Aerie" has since then made it into Shi'ar language and is used synonymously for home / nest / empire.

The world that housed the M’Kraan Crystal has been hotly contested over the millennia. Originally inhabited by an unknown race, this species was either evicted from their world wiped out by the M’Kraan. The M’Kraan then took the world for themselves for thirteen millennia, until the Shi’ar did the same to them. Ever since its discovery by the Shi’ar, the M'Kraan Crystal has been under their protection. The guards of the crystal seem to acknowledge this, as Jahf has been seen reporting to the Shi’ar on various occasions. During the brief war with the returned M’Kraan, the Shi’ar dropped a star on the enemy fleet immediately above the world. The crystal and the world, however, survived unharmed.

The Clench is a group of planets close to the Shi'ar Empire that banded together out of fear of being forced to merge into the Empire. The most prominent planet of the Clench Union is called Standing Still, which acted as the staging ground from the final confrontation between the Shi’ar and the Uncreated. This is also from where one-time Starjammers member Keeyah originates. The worlds have often harbored the Starjammers during their various missions against the Shi’ar, resulting in the destruction of both the worlds Feather’s Edge (destroyed by the Scy’ar Tal, who were attacking the Shi’ar during a battle with the Starjammers) and an unnamed Clench World (destroyed by a rogue Hodinn, hunting the Starjammers for Vulcan).

The Kree Galaxy is made up of numerous planets, with the Kree's Homeworld - Hala, being their ruling planet. According to Kree sources, the original Kree Empire was composed of about 10,000 planets (this number may have been exaggerated). However, since the explosion of the Nega-Bomb, most organic things have been destroyed. Some planets were totally stripped of life, while others only harbor a few survivors. The Shi'ar assumed control of the Kree Galaxy and Lilandra appointed Deathbird Viceroy to the once Kree Empire. [aftermath of Operation Galactic Storm] However, Deathbird later abandoned her post.

The Kree race originated from the planet Hala, which is the 4th planet of the Pama System, in the Greater Magellanic Cloud. Hala's atmosphere has a higher nitrogen content than that of Earth and also has a much stronger gravitational force.
Hala and a number of other Kree planets have been totally stripped of vegetation and even the oceans have been covered by a plastic canopy, so that every available space could be used for cities and roads. Hala is comprised of a few hundreds city-states of which the largest, Kree-Lar, is the capital. Another important city-state is the largest industrial state Harfax, which is located about 1000 miles from Kree-Lar.

After manipulating the Shi’ar into a conflict with the Earth, the Kree managed to extract themselves from under Shi’ar rule.

The D'Bari Homeworld was in a solar system of eleven planets. It was the 4th closest to the systems star. However, the entire system was destroyed when Dark Phoenix consumed the star's energies, causing it to go Super-Nova. [Uncanny X-Men (1st series) #135]
Learn about the D'Bari Alien Race. 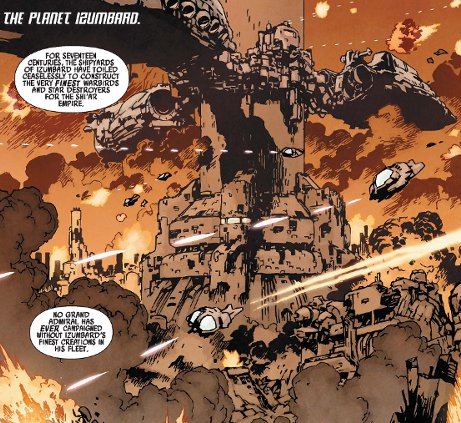 For seventeen centuries, Izumbard served as the Shi’ar’s primary shipyard. Their people constructed the finest warbirds and destroyers for the fleet and it was said no grand admiral ever campaigned without Izumbard’s ships in their fleet. After the Shi’ar fell to the Kree in the War of Kings, Izumbard declared their independence from the Shi’ar. However, new Majestor Gladiator and his Imperial Guard personally put a stop to their rebellion [Realm of Kings: Imperial Guard #1]

The home planet of the P!ndyr is Epsilon Seikosha IX. This planet has a rocky terrain, with deep canyon's and high mountains. The X-Men were transported here by Lila Cheney and Deathbird so that they could learn the truth about Xavier (Xavier was actually a War Skrull in disguise) before fighting the Starjammers (again War Skrull's in Disguise) in the planet’s orbit. [Uncanny X-Men (1st series) #276]
Learn about the P!ndyr Alien Race.

A ring of rocky asteroids, literally floating islands about a large gas planet with breathable atmosphere. The real Xavier, Psylocke, Jubilee, Wolverine and Starjammers were held here, whilst the War Skrulls had taken their place. [Uncanny X-Men (1st series) #277]

The Timorians Homeworld is the planet Timor, which is located in the Varanus IV system somewhere within the Shi’ar Empire.
Learn about the Timorian Alien Race.

This is a Fringe System on the outer most Rim of the Shi'ar Imperium. The X-Men were teleported into a Shi'ar ship in this system by Lila Cheney. The X-Men fought alongside the Starjammers (or so they believed) against the Imperial Guard. [Uncanny X-Men (1st series) #275]

A world entirely covered by water, Kr’Kn’s sole purpose is to house an inescapable prison. The worst of the worst criminals the Shi’ar have are housed on Kr’Krn. [X-Men: Kingbreaker #1-4]

The home world of the Strontians, little is known about this planet. However, it was apparently destroyed and the almost the entire Strontian species along with it through unknown means. [War of Kings: Warriors #1]
Learn about the Strontian Alien Race. 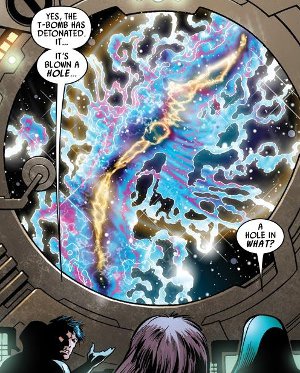 When the Inhuman’s Terrigen Bomb detonated at the end of the War of Kings, it tore a hole in space and time between the Shi’ar and Kree galaxies. Initially, the Fault was ever expanding and would have consumed the universe had its growth not been stopped by Adam Warlock. Being a rip in space and time, the Fault acted as a gateway to numerous realities, including the dreaded Cancerverse. Soon after the Fault was opened, the horrific forces of the Cancerverse invaded the universe through the Fault and the combined forces of the Shi’ar, Kree and various other races and cosmic entities held them at bay until the Fault was closed.