Rogue remained team leader of the Unity Squad but things took a dire turn when the Inhumans' Terrigen Mists were released into the Earth's atmosphere. Proving deadly to mutants, Rogue 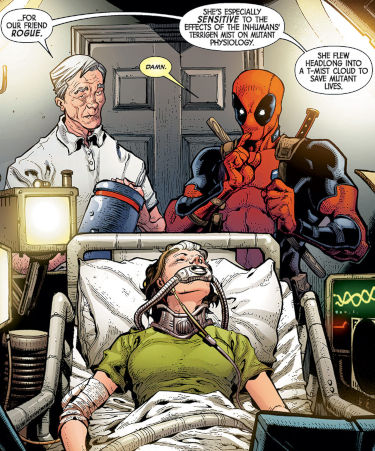 developed the disease known as M-Pox after exposure and required regular doses of medication to keep the effects at bay. Because of this, Rogue was less than inviting to a neophyte hero and NuHuman named Synapse, whom Rogers had invited onto the team for optics.

In addition, she also had to contend with Deadpool joining the team against her wishes. Steve Rogers reminded her that people could change, as she herself used to run around with the Brotherhood. Rogue reluctantly saw his reasoning and allowed Deadpool to remain, despite her better judgement. Finally, Rogue had a brief relationship with Johnny Storm, the Human Torch, which ended even though he remained with the Unity Division. Johnny's new affair with Medusa of the Inhumans proved yet another sticking point in the team's interpersonal dynamics. [Avengers #0, Uncanny Avengers (3rd series) #1]

During a mission in Boston, the Unity Division confronted a NuHuman called the Shredded Man. His bio-toxins consumed the entire world in the future, leading Cable to travel back in time and 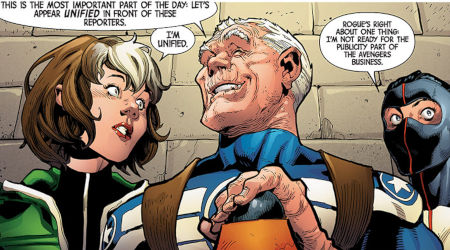 assist the Avengers. Deadpool, of all people, mediated between his field leader Rogue and Cable's take-charge attitude. The threat was ultimately contained and Cable signed up as a regular member of the Unity Division. [Uncanny Avengers (3rd series) #2-3] His interest was partly because of the Avengers' ongoing mission to locate the Red Skull and reclaim Professor Xavier's brain. Rogue, Deadpool and the Human Torch attempted to raid the Skull's finances at a vault in Bagalia, only to find the vault empty. In fact, Red Skull was present and used his telepathic powers to make Rogue see him as Gambit, allaying suspicion while he claimed his riches. [Uncanny Avengers (3rd series) #5]

When the Avengers were swept up in the Pleasant Hill fiasco, they were rewritten into civilian lives by the reality-altering powers of the living Cosmic Cube, Kobik. Fortunately, Rogue's mental defenses from her training with Professor Xavier were somehow capable of resisting Kobik's influence. She reasserted her original personality and helped snap the other Avengers out of their spells. [Standoff crossover]

One of the consequences of Pleasant Hill was Steve Rogers' youth being restored, leading to him exhibiting a more active role in the field from then onwards. Rogue and Steve began butting heads over the Red Skull investigation and M-Pox threat. As a result of the Pleasant Hill event, this restored Rogers was actually a Hydra sleeper agent and deliberately trying to undermine the Unity Division, a fact he hid well by couching his arguments in terms of respecting the rule of law 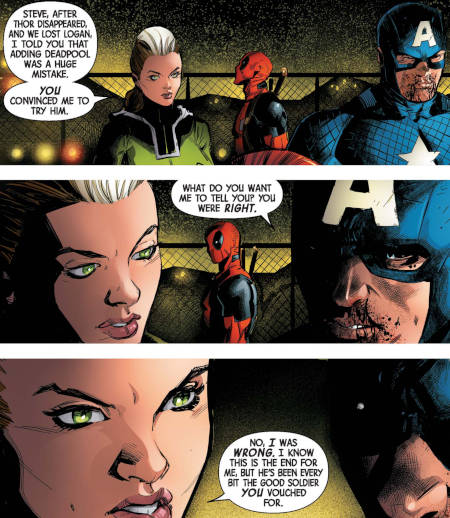 in their missions. So, Rogue instead went behind his back with Cable and other mutant allies, such as when they stole a sample of Terrigen being held by the U.S. military for fear it would be weaponized against mutants. Rogers was furious when he learned about this and that Deadpool had covered for the mutants on the team. He seized the opportunity to disband the Avengers. Unaware of the subtext involved, Rogue tried to argue for the team, vouching for Wade's good intentions and offering to step down from the team instead of Cap disbanding it altogether. Instead, Rogers rejected all of Rogue's arguments and brutally lashed out at Wade as a "failed experiment." [Uncanny Avengers (3rd series) #13-14]

Rogue and Wade bonded over getting fired. He confided in her about his daughter Eleanor, who was being raised in secret to avoid his enemies targeting her. Ellie was X-Gene positive and therefore a potential victim of M-Pox, which was part of why he helped Rogue. Deadpool trusted Rogue with Ellie's location and asked her to promise to look after his daughter if anything happened to him. Rogue was touched and agreed. [Deadpool (5th series) #18] Before they could tell the other Unity Division members about Captain America disbanding them, Rogue's team was pulled into a fight with a Hand-possessed Hulk. Realizing they were still needed, Rogue and Deadpool pushed to keep the Avengers Unity Division afloat, regardless of whether they had Steve Rogers' approval or not. Rogue struggled with the idea of being "unofficial" Avengers, though, and often refused to be acknowledged as the team's official leader, saying they were just a group of heroes working for the common good. [Uncanny Avengers (3rd series) #15-17]

Rogue softened a bit towards the Inhumans during her time with the Avengers. When the Terrigen cloud threatened to disperse, poisoning the atmosphere worldwide, the ranking X-Men gathered to decide whether to go to war with the Inhumans. Rogue was one of the few dissenting voices, despite her own plight. [IVX #1]

The Red Skull finally launched his attack on the Unity Division. Having already possessed Quicksilver, he quickly took down most of the team and began telepathically reprogramming them as well. Rogue saw the dominos falling, and dispatched Deadpool to recruit additional support before confronting the Skull alone. Her mental defenses, shaped by Charles Xavier himself, nearly helped Rogue defeat the Skull. In the end, however, his telepathic power was too strong for her, and Rogue also fell under his spell. 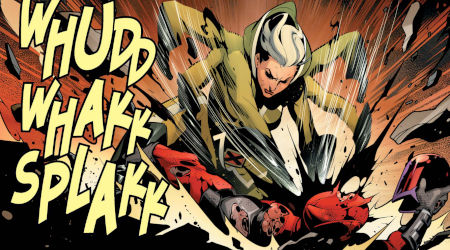 With the help of Wong and Spider-Man, Deadpool nearly got to the Red Skull. Unfortunately for him, the possessed Rogue was acting as his bodyguard and she thoroughly pummeled Wade, causing him massive injuries that taxed even his healing factor. Still, the beating allowed Deadpool to play his trump card, snapping Magneto's telepathy-proof helmet on Rogue's noggin. Now free from Shmidt's control, Rogue knocked the Skull senseless. She brought the unconscious Red Skull to the Beast, who conducted emergency surgery to finally remove the telepathic brain of Charles Xavier from the Skull's own mind. [Uncanny Avengers (3rd series) #18-21] 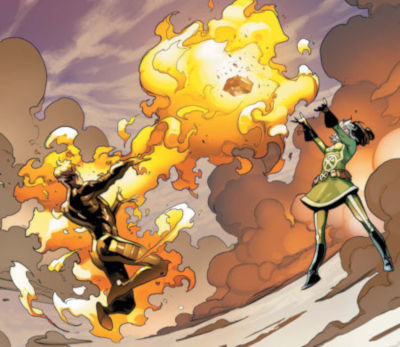 Afterwards, Steve Rogers arrived at the hospital and tried to take possession of Xavier's brain, citing national security. Unwilling to allow the professor to be weaponized again, Rogue refused and took off with the remaining gray matter. She had the Human Torch meet her in the skies over New York. With a short eulogy, she had Johnny immolate Xavier's brain, finally putting the professor back to rest.

As the Unity Division celebrated their victory, Deadpool snuck off on his crutches, still recovering from the beating Rogue gave him. Rogue came after Wade to apologize, but he waved it off and knew what happened wasn't her fault. Still, Rogue thought he deserved a reward and swept Wade up in her arms, passionately kissing him as they rose into the sky. Deadpool had grown on her during their time together, and a glimpse into his mind gave her an even greater understanding of the pain going on beneath Wade's jokes. When the two of them began making out, however, a third party surprisingly emerged: Wonder Man! 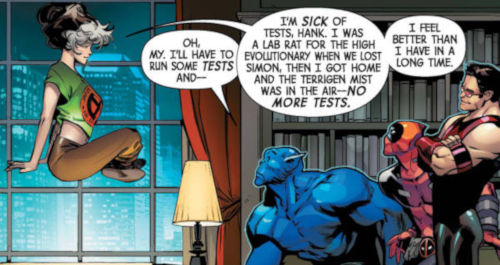 A physical by Hank McCoy revealed that Deadpool's healing factor served as a catalyst that finally broke Simon's ionic matrix free from Rogue's powers. Mercifully for Rogue's privacy, Simon revealed he had been completely dormant and had no recollection of anything since Counter-Earth. Rogue also found herself still in possession of Simon's ionic strength, invulnerability, and flight. [Uncanny Avengers (3rd series) #22-23]

One crisis after another kept Rogue from stabilizing plans for the Unity Division's future. Most of her team was trapped in Manhattan during the Secret Empire takeover, forced for weeks to fight against total darkness and demons invading from the Darkforce Dimension. [Uncanny Avengers (3rd series) #24-25] Once they emerged from the Darkforce dome, the Unity Division learned of Steve Rogers' role as leader of Hydra in America's takeover. In addition, Deadpool had served at Rogers' side after he unveiled his true intentions, and was even responsible for assassinating beloved S.H.I.E.L.D. agent Phil Coulson. The real Captain America returned and the evil Rogers was incarcerated, but Deadpool was on the run. Rogue felt for Wade, and tried to bring him in peacefully, but Deadpool's guilt and self-destructive nature kept him from accepting help. He escaped Rogue after she made it clear than anything that might have been developing between the two of them was now over. [Despicable Deadpool #293]