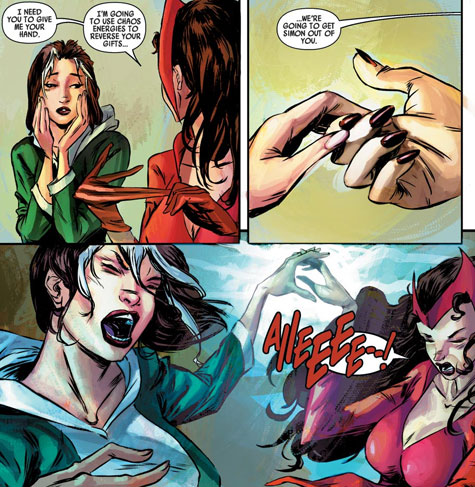 After the final battle Rogue was placed in a stasis tube alongside other injured team members so that her health and powers could be carefully examined. The Vision carefully monitored her and, when he felt it was time to release her, the rest of the Unity Squad gathered.  When Rogue stepped out of her chamber, Wanda offered to use her magic to remove Wonder Man’s psyche from her mind. Unfortunately, the moment she touched Wanda, Rogue began involuntarily absorbing her powers and was devastated to realize she had no control over them anymore. In a fit of anger and despair, she lashed out at those around her and flew off into the city. Wonder Man was still in her head, though, and he tried to calm her down but it had little effect. Wanda finally caught up with her and, despite being on the receiving end of Rogue’s temper, promised to stand by her friend and get her through it. [Uncanny Avengers (1st series) #23]

The Unity Squad had been through so much and the various members were starting to go their separate ways. Rogue met with Wolverine and had heart to heart with him about their recent actions. Little did she know it would be the last time they would talk before his death. When Wolverine left, Rogue went back into the Avengers Mansion and was shocked to discover the Red 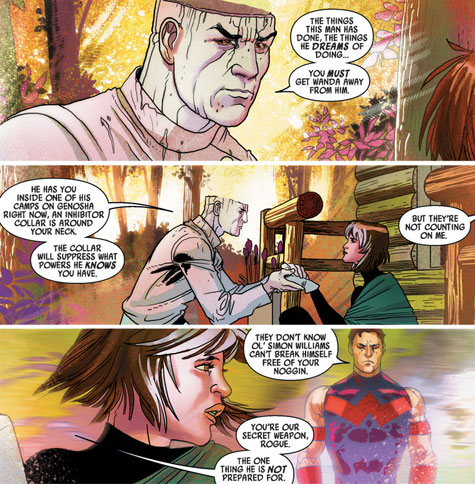 Skull’s S-Men waiting for her inside. Before she could put up a fight, she was knocked out and taken to the Skull’s newly built concentration camps on Genosha. Whilst she was unconscious, Xavier's mind reached into her dreams with the very little strength he had left. Despite his body being dead, Xavier’s consciousness had continued to fight the Red Skull’s abuse of his powers, though now his strength was waning. He told Rogue that the Red Skull had neutralized the powers he knew of but he would be unprepared for Wonder Man’s influence. When Rogue woke up, she found herself chained up in a cell next to Havok and Wanda and she broke free using Wonder Man’s strength. The three of them snuck through the heavily guarded camp and discovered Magneto was also being chained up in a cell. They freed him but it was all in vain, as the Red Skull found them and subdued them with his mental abilities. The Skull began torturing them but Magneto broke free and the mutants took on the S-Men. They heroes eventually gained the upper hand but Magneto settled back into his villainous ways by murdering his adversaries. Rogue was disgusted when Magneto seemingly killed the Red Skull in cold blood, an emotion which turned to horror when the Skull began to rise up and become Red Onslaught. [Uncanny Avengers (1st series) #24-25]

The empowered villain immediately unleashed his ultimate plan by using the total power of Charles Xavier’s brain and manipulating the entire world with it. Waves of hate washed over everyone and people began turning on each other, creating mass riots and untold violence. On Genosha, along with Havok, Magneto and Wanda, Rogue attacked Red Onslaught though they were no match for his immense power. Wanda herself succumbed to the hate and was brainwashed into fighting for Onslaught. Rogue tried her hardest to resist his influence and she managed to make skin contact, absorbing some of his power. Inside Red Onslaught, she saw complete blackness. When a voice therein called out to her, she realized a small fragment of Xavier still resided inside the Red Onslaught. Spurred on by Xavier’s words, Rogue found the strength and forcibly removed Wanda away from Onslaught. With a little distance between them, Wanda came to her senses and the two women were joined by more of Earth’s heroes, who had come to fight Onslaught. When Rogue told Dr. Strange and Iron Man about the fragment of Xavier contained in Onslaught, they came up with a plan to use magic to put Xavier in charge again. Using Wonder Man’s power, Rogue took on Onslaught and provided a distraction so Dr. Strange and Wanda could cast their spell. After a shaky first attempt, the two heroes managed to cast their spell and Onslaught was defeated.

However, it soon became apparent something had gone wrong and the moral compass of every person on Genosha had been inverted. The heroes quickly fell to infighting and the various factions went their separate ways, with Rogue returning to the X-Men once more. The morally inverted X-Men soon decided it was time they left humanity behind and they aligned themselves with a newly returned Apocalypse. The Red Skull, who survived the Genosha incident, was in Avengers custody but the X-Men now wanted him for themselves, as they 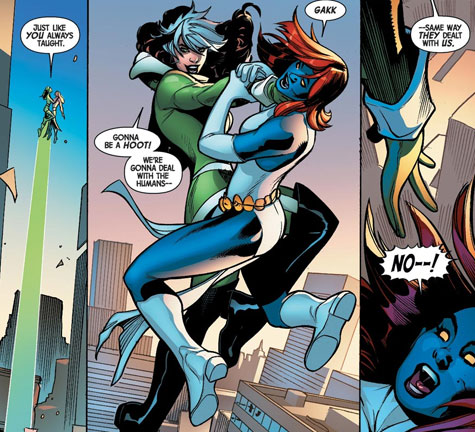 believed Xavier still resided within him. Rogue attacked her former friends and teammates in a bid to get him but quickly discovered that the Skull was now missing. Later on, the inverted Mystique, who was now acting heroically thanks to her own inversion, came to the X-Men and begged them to stop their quest for domination. She was met by her children, Nightcrawler and Rogue, who refused to listen. In fact, Rogue going as far as trying to kill her mother by dropping her from a great height. The X-Men’s plans were soon thwarted and a new spell was cast over everyone, returning them back to their regular selves again. In the weeks that followed, it became apparent that the Unity Squad still had a long way to go to mend the growing tensions between humans and mutants. Rogue returned to the Avengers again, now as co-leader of the squad, alongside the Scarlet Witch and a new line up of heroes. [AXIS crossover]

During the Inversion event, Quicksilver and the Scarlet Witch had discovered that Magneto might not have been their father, so they went to seek out the High Evolutionary for answers. When they didn’t return, Rogue became worried and assembled the Unity Squad to track them down. They travelled to Wundagore Mountain in search of clues but, when Doctor Voodoo cast a teleportation spell to bring them to the Evolutionary on Counter-Earth, it went wrong and the team was scattered. Rogue woke up to find herself strapped to a chair in a strange scientist’s lab and discovered Wonder Man’s consciousness was no longer present in her mind. 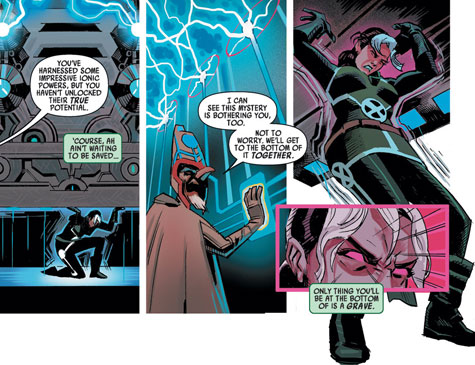 The scientist kept her a secret from his master, as he wanted to conduct experiments on Rogue and the ionic energy in her system she still possessed. When Wanda and Quicksilver were also brought to the scientist, they managed to escape and broke Rogue free too. The Unity Squad members all managed to gather together to take on the High Evolutionary and his twisted creations. The twins found answers to their heritage and the Squad returned to Earth again to lick their wounds. Rogue was left with ionic powers, but no explanation for what had truly happened to Wonder Man while she was unconscious. [Uncanny Avengers (2nd series) #1-5]