In the aftermath of the worldwide destruction, Rogue was on hand to help those in need. Working with Magneto, she helped clear out survivors from a collapsed subway station. During the mission, Magneto declared his feelings and told her that he wanted them to officially be in a relationship. After some deliberation, she turned down his offer and ended their relationship. [X-Men Legacy (1st series) #274] 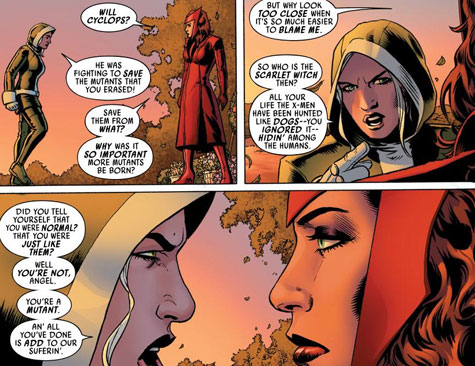 The death of Xavier hit the X-Men hard but Rogue seemed affected more than most. She became more sullen and angrier and even went as far as adopting a new uniform which mirrored the one she wore during her Brotherhood days. When the Scarlet Witch came to pay her respects at Xavier’s grave, Rogue lashed out at her, as she believed Wanda and M-Day were the root cause of it all. They were interrupted by a group of mutates working for the Red Skull, who took the body of Xavier and kidnapped the two women as well. The two were taken back to the Red Skull’s base but Rogue soon realized she was not the target, the Scarlet Witch was. Rogue broke free of her restraints and found Wanda but, after hearing her talking to the Red Skull, she believed the Avenger was now working with the enemy. Distrusting Wanda even more, Rogue attacked her but stopped when they stumbled upon the body of Xavier. The Red Skull had taken Xavier’s brain for his own use and used his new telepathic powers to capture the two women again.

The Skull then took Rogue and Wanda to New York and used his powers to incite a war between humans and mutants. A bloody battle ensued that cost the lives of many people. Rogue was able to turn the tide of the battle by temporarily nullifying the Red Skull’s telepathy. 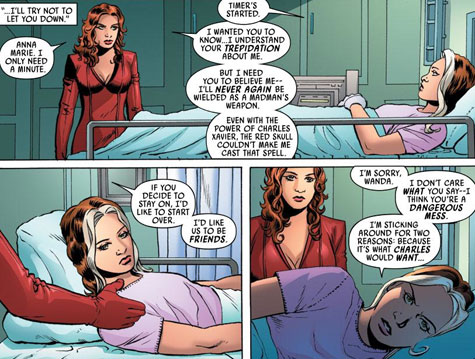 Unfortunately, she was shot and beaten for her troubles. Eventually, the Red Skull was defeated but he escaped, vowing that it was just the beginning of a long war. Rogue was taken back to the Avengers Tower to heal. Whilst she was there, Wanda came to her to try and make amends but Rogue would not listen, making it clear she did not trust her. In the wake of the attack, Captain America decided it was time for the X-Men and Avengers to work together and so he set up the Avengers Unity Aquad. Captain America, Thor and the Scarlet Witch would represent the Avengers and Havok, Wolverine and Rogue would be there for the X-Men. [Uncanny Avengers (1st series) #1-4]

Rogue was still on call for the X-Men, though. When the ancient threat of Arkea reared her head, Rogue was one of the X-Men who were assembled to take her on. [X-Men (4th series) #1-3] Rogue’s soft spot for Gambit reared its head again when he got himself mixed up with Tombstone and a mysterious woman named Joelle. Rogue tracked him down and was immediately drawn into the battle between him and Tombstone’s forces. After sorting out the situation, the two parted ways, but the romantic tension between them still remained. [Gambit (5th series) #9-12]

Rogue also committed herself to the new role as an Avenger, as she believed it was what Xavier would have wanted. However, as well as things being tense between her and Wanda, she didn’t exactly bond well with her other Avenger teammates like Wasp. As well as tackling threats, the Unity Squad was also designed to be a PR machine in the quest to ease human and mutant relations. The fact that Rogue and Wanda were on the team caused some debate, as they were also known to the wider public as having been on the Brotherhood of Evil Mutants. 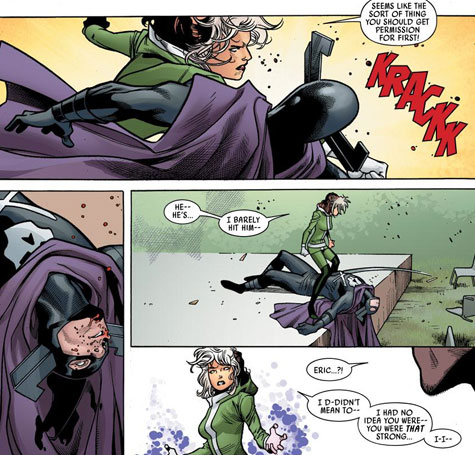 A press conference was called to show the world the new team and address any fears the public may have had. Things took a bad turn when the Grim Reaper, Wonder Man’s villainous brother, showed up to disrupt proceedings. After he stabbed Wonder Man, he went to kill Wanda. Rogue quickly absorbed some power off Wonder Man and attacked the Grim Reaper, but she was unprepared for the powerful nature of her new abilities and she accidentally snapped the Grim Reaper’s neck on live TV. [Uncanny Avengers (1st series) #5]

SHIELD investigated the events of Grim Reaper’s death but decided that Rogue wasn’t to blame. Nevertheless, it was thought best to keep her from active duty for a while until the dust settled. Rogue did not take well to being benched, though, as she felt like a scapegoat. [Uncanny Avengers (1st series) #7]

When Cable and his X-Force team were implicated in an incident that left dozens of people dead, it was up to Rogue and the Unity Squad to track them down. Rogue was uncomfortable with apprehending her old allies but, since Cable had gone to the top of SHIELD’s most wanted list, she had no choice. X-Force had gone into hiding, so it was decided to use Hope to get close to Cable. Hope wasn’t cooperative though and gave the team the slip once she knew they wanted to arrest her father. They managed to track her down and Rogue appealed to her better side. However, once again, Hope vanished before they could get any information from her. They eventually found X-Force and, after a short fight, arrested Cable. [Cable and X-Force #9-10]

When it looked like Apocalypse was back in action, the Unity Squad went to investigate. It became clear though that something was different, as as it was not Apocalypse but two siblings that claimed to be the heirs of Apocalypse. Dubbed the “Apocalypse Twins,” they destroyed the Peak space station and wiped out the Clan Akkaba base in the North Pole. 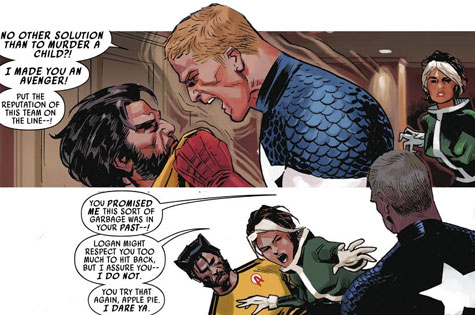 Rogue felt that the X-Men should handle it as this was their problem but Wolverine assured her the Avengers would be just as good. Wolverine had taken more of a mentor role to Rogue after the Grim Reaper incident and, after other recent events, he tried to emphasize the need to protect life and tone down her cavalier attitude. Unfortunately, when the Avengers found out that Wolverine had led the kill squad known as X-Force and his actions had led to the birth of the Apocalypse Twins, an argument broke out. Rogue naturally leapt to Wolverine’s defense but the end result was the Unity squad splitting up. [Uncanny Avengers (1st series) #8-9]

Rogue and her team went on the offensive, trying to gather as much information on the Apocalypse Twins and their end goal as possible. After interrogating Ozymandias, they found the location of a pocket universe in which the Twins were residing. 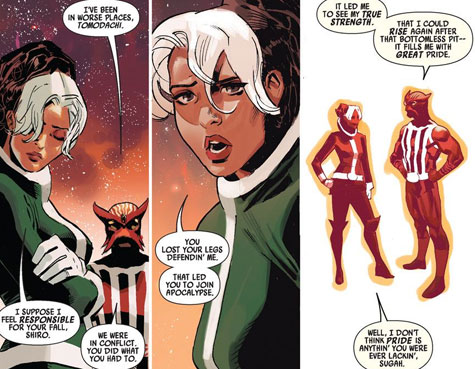 In the meantime, the Twins had resurrected a number of people to serve as their new Horsemen of Death. They sent the Horsemen out to attack the Unity Squad and to retrieve the Scarlet Witch. Two of the resurrected, Sentry and Daken, were sent after Rogue’s team and managed to scatter them before Thor and Wolverine took them on. Rogue was left with only Sunfire as an ally as they explored the Twins’ vast space station. Rogue took the opportunity to air her guilt over Sunfire’s previous situation with Apocalypse. She discovered that Sunfire harbored no ill feelings towards her, as he was grateful for realizing he had the strength to come back from anything. [Uncanny Avengers (1st series) #10-11]

The Twins had captured Wanda as they wanted her to cast a spell to take all the mutants off of Earth and onto a new planet where they could live without humans. After much deliberation, Wanda decided to help them and told the Twins she believed it was a chance for mutants to truly prosper without any human interference. However, her real plan was to cast a spell to bring all the world’s mutants to the Twins’ base so they could defeat them once and for all. Rogue and Sunfire eventually found a battered and bruised Wolverine deep within the base. He told them Wanda was going to cast a spell to undo everything they had worked for and that Rogue needed to stop her. Taking some of Wolverine’s powers, she hunted down Wanda to put a stop to her plans, not knowing that she was really going to double cross the Twins. 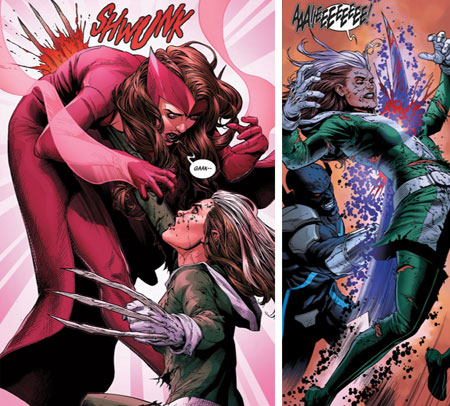 Rogue and Sunfire found Wanda casting the spell but, before they could get to them, Daken and the Grim Reaper attacked. Wolverine joined in the fight and  tried to emphasis that Rogue should not kill Wanda. However, she didn’t hear him and, when she finally caught up with Wanda, Rogue stabbed her through the gut with her bone claws. As Wanda kneeled before her, dying, the severity of what Rogue had just done started to creep into her. As she tried to console herself with the fact it needed to be done, the Grim Reaper found her. He caught her unaware and stabbed her through the back with his scythe and vaporized her body. [Uncanny Avengers (1st series) #12-14]

Whilst Wanda had managed to bring all the world’s mutants to the base, her plan still backfired. The Twins’ were prepared for her betrayal and all the mutants were placed in stasis. The Twins eventually destroyed the entire Earth and set up a mutant paradise of Planet X. For six years, the mutants lived on there until Havok found a way to go back in time and save the entire Earth. He managed to send the consciousnesses of all the remaining Unity squad members back to before Rogue killed Wanda. Wolverine found Rogue and told her everything that was going to happen. Overcome with guilt, Rogue realized how foolish she had been holding on to her hate for Wanda and the two finally made peace. They needed a new plan though and Rogue was going to become an integral part of it. The Celestial known as the Executioner had come to Earth to destroy it, as it knew the planet was going to be the source of a great danger. Rogue absorbed the powers of every member of the Avengers and X-Men and took on the Celestial herself. Rogue managed to contend with the numerous powers and psyches to prevent the Executioner from destroying the planet whilst the other members of the Unity team took on the other threat of Kang the Conqueror and the Apocalypse Twins. 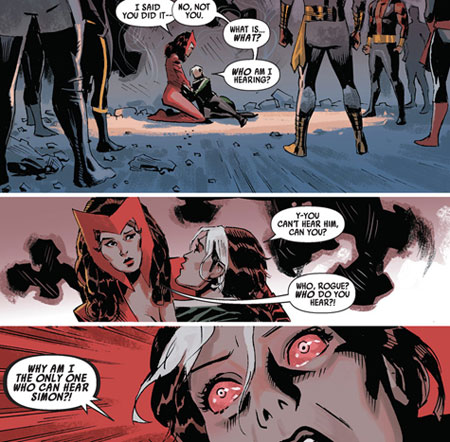 The Celestial was killed and Kang was beaten but Rogue still had all the absorbed psyches to contend with. The stress was starting to kill her, so Wanda managed to cast a spell to remove all the borrowed powers and minds from Rogue, restoring her to normality again. However, when Wonder Man was absorbed into Rogue, he had allowed his entire self to be destroyed to give her as much power as possible. With no physical body to which he could return, Wonder Man’s psyche was now trapped inside Rogue’s head. Much like she had Ms. Marvel’s mind and powers inside her all those years ago, she now had to contend with having those of Wonder Man instead. [Uncanny Avengers (1st series) #15-22]