Later that day, the X-Men confronted Gladiator, leader of the Shi'ar Imperial Guard, who then teleported Beast, Rogue, Joseph, Gambit, Bishop and Trish Tilby to the Shi'ar Empire to defeat the Phalanx 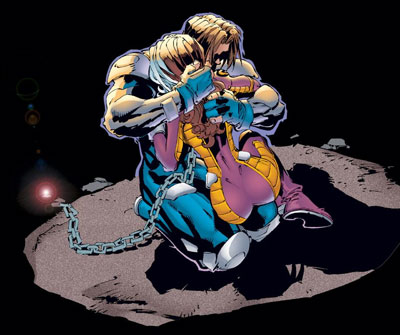 and keep them from destroying the entire Imperium. Among this squad, Beast was the senior member, yet all turned to Rogue for leadership and she filled the expected role. In their battles against the Phalanx, they were accompanied by Deathbird, a member of the Shi'Ar Imperial family and former enemy of the X-Men. Against all odds, they succeeded and Deathbird was taking them back to Earth through a Shi'ar Stargate when a larger ship destroyed the portal and the X-Men crash-landed in Antarctica. There, they were confronted by a trio of bounty hunters from Gambit's past and Nanny, the robot guard who once before had held the X-Men prisoner in Magneto’s Antarctica base. With their powers negated by an inhibitor field and unable to escape, Rogue and Remy spent their first night together. Albeit prisoners of their enemies, they used the chance to physically express their love to each other and had sex for the first time. [Uncanny X-Men (1st series) #348]

The next day, Gambit was put on trial by someone wearing the guise of Erik the Red (later revealed to have been Magneto). During the trial, Rogue and the others learned of Gambit's past dealings with Mister Sinister and the Marauders when Rogue was forced to absorb Gambit’s mind. Immediately, she rejected him and, when the X-Men departed to Westchester, Rogue left him in Antarctica, though to a certain degree her decision was influenced by Remy’s own residue personality in her head. He wanted to atone for his crime and deemed this an appropriate punishment. [Uncanny X-Men (1st series) #350] 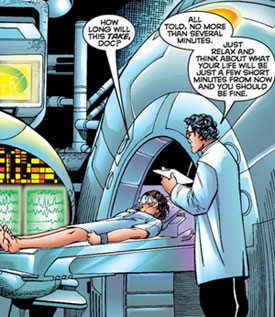 At one point, Rogue was given the chance to have her powers removed. She had learned of the Agee Institute through TV news and, after checking it out, she found that Dr. Agee really was capable of removing the mutant gene. When Mystique learned of Rogue’s plan, she became rather angry with her adoptive daughter. However, despite all of Mystique’s warnings, Rogue was still about to undergo the treatment. She only declined in the last instant for one sole reason: Rogue feared that the device would be used on other mutants against their will and, without her strength, she would have had no way to make sure that the apparatus would be destroyed after her operation. She made the hard decision and destroyed the machine, which could have given her a normal life. [Uncanny X-Men (1st series) #359]

Driven by guilt, Rogue secretly sneaked out of the mansion and flew to Antarctica to search for Gambit, yet she found no trace of him or the mysterious fortress where the trial took place. Little did she know that he had already made his way back to civilization with the help of the mysterious New Sun. Eventually, Gambit ran across some of the X-Men in Japan and returned with them to Westchester, having been granted a second chance. To sort out their relationship, he and Rogue spent a day in Boston, where they found themselves under attack by Kali. During the battle, it was obvious that they still loved each other but Remy still couldn’t bring himself to express his feelings. Rogue realized that she had been pushing him and apologized, but also said that she wouldn’t wait for him forever. [Uncanny X-Men (1st series) #361, X-Men (2nd series) #81]

After the Magneto War and Joseph's funeral, Rogue was left behind while the other X-Men were abducted for a journey through time and dimensions. She flew to Genosha, now under Magneto’s rule, to try and reason with the man and quickly came to know him as a friend once more. Still, after aiding Quicksilver and the Genoshan Cabinet in fighting off the Mutate known as Zealot, Magneto ordered her to leave the nation or face criminal charges. [Magneto Rex #1-3]

When the team returned home, however, Xavier began to become mentally unhinged, due to the betrayal of his invention, Cerebro, Magneto's overthrow of Genosha and the death of Joseph. Xavier pushed the X-Men too far and Storm called in Scott and Jean to reason with the Professor. They failed to help Xavier, who then dissolved the X-Men and told them to go their own way, since he had no use for failures. The majority of the team left on personal vacations and Storm stayed behind to keep Xavier from harming himself. [Uncanny X-Men (1st series) #372]

Rogue, Nightcrawler and Shadowcat began their vacation in Manhattan. There, they met up with Mystique, who was on the run from the Japanese government. She was being tracked by Sunfire, but Rogue managed to convince Shiro that Mystique was innocent of the murders of which she was being charged. Together, they discovered the true villains, Skrull shapeshifters, disguised as Mastermind and Mesmero. After settling things with Mystique and Sunfire, they received a call that Wolverine had been killed on the surrogate X-Men's mission to save the Mannites. At the mansion, Xavier revealed that he had only pretended to lose control in order to uncover a traitor he had sensed in their midst. The traitor was discovered when Wolverine's deceased body reverted to its true form: that of a Skrull warrior. [X-Men (2nd series) #93-94] The true Wolverine had been kidnapped months ago by Skrulls working with Apocalypse, who brainwashed Logan into becoming his Horseman of Death. However, the X-Men were able to snap him out of the mental hold and also stopped Apocalypse’s plans to extract the energies of the mutants only referred to as the Twelve, which would have granted him omnipotence. 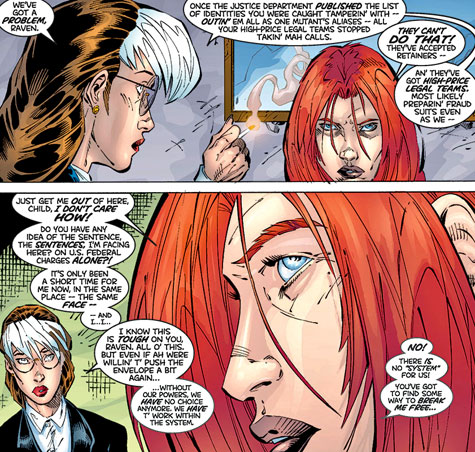 Weeks later, the High Evolutionary activated an anti-mutation wave that switched off the mutant gene in everyone across the planet. Finally completely normal, Rogue worked for her law degree and tried to get Mystique out of jail, for she had been caught when her mutation was canceled. However, Rogue refused to use criminal methods to get her surrogate mother out of jail, even though the shapeshifter was nearly driven insane by being stuck in one form and confined to limited space. When the X-Men learned that the anti-mutation wave was going to reverse itself and horribly mutate the entire world, however, Rogue immediately returned to the team to stop the disaster. They raided the Evolutionary's satellite, disabled the anti-mutation field and defeated Sinister, who had been manipulating the Evolutionary. With her powers active again, Mystique soon broke out of prison and she vowed vengeance on Rogue for abandoning her when needing her most. [X-Men (2nd series) #99, Uncanny X-Men (1st series) #380]

About six months later, Rogue was elected the new field leader for one X-Men squad. Other members 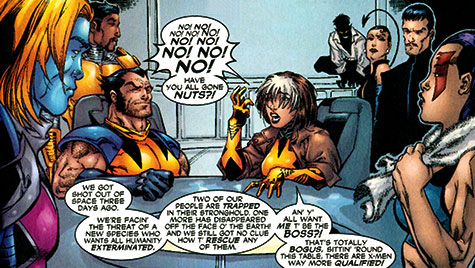 that had filled the position before were either busy with the other team or unavailable for other reasons. Among those still at the mansion, Rogue was the only one with the needed experience, skill and attention to take the job. [X-Men (2nd series) #103] She successfully led the X-Men against the Crimson Pirates, the Goth and the Neo and proved herself to have a good instinct for making hard and risky decisions. Her style varied a lot from Storm’s or Cyclops', who usually chose to play it safe.

During the crisis known as Maximum Security, Earth was turned into a penal colony for alien prisoners. Rogue encountered the Blood Brothers attacking Z'Cann, one of Xavier's Cadre K. Rogue drove off the attackers but Z'Cann was critically wounded. The Skrull girl deliberately made contact with Rogue, transferring her memories of Xavier's plans to the mutant. With this information, the X-Men managed to meet and rescue Bishop, who had returned from deep space. They later teamed up with many of Earth's heroes to drive off the alien invasion. Unfortunately, Z'Cann was unfamiliar with Rogue’s powers and, to make sure that the information would be received, she even boosted Rogue’s absorption power with her own telepathy. As a result, her Skrull Deviant genes mixed with Rogue's half-Kree physiology in an unexpected manner. 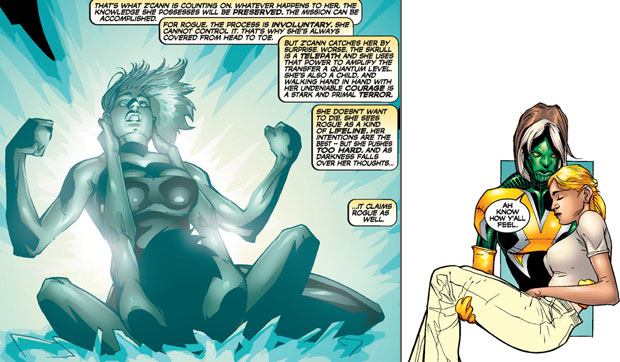 Rogue was now capable of calling forth the memories and abilities of anyone she had absorbed in the past. She could not control this manifestation of her powers and would spontaneously sprout claws, fire optic blasts or adapt organic steel skin. She gained some self-control through meditative training with Wolverine but, because of the disability her new powers gave her, Rogue stepped down as team leader. [X-Men (2nd series) #107, Uncanny X-Men (1st series) #388] 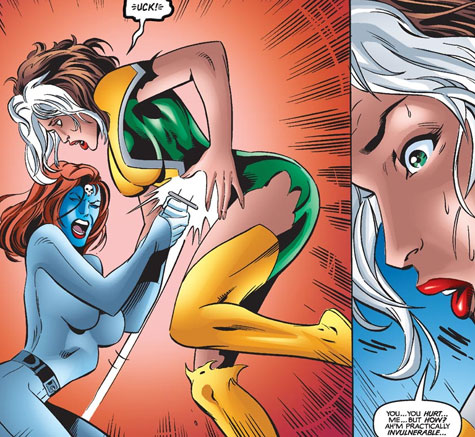 Around the same time, Mystique led the Brotherhood in another attempt to kill Senator Kelly and spread the Legacy Virus to humans only. Rogue, Bishop and Wolverine confronted Mystique on Muir Island. In the fight, it became painfully clear that Mystique still held a grudge against Rogue for having abandoned her in a time of need. She used a blade on Rogue’s gut, causing a serious wound that would have been fatal, if Rogue had been without Wolverine’s healing abilities. Rogue recovered quickly and returned the “favor" on Mystique, inflicting a similar, critical knife wound. Still, victory was too late, as Moira MacTaggert died because of the injuries received when the Brotherhood blew up her lab complex. [Bishop: The Last X-Man #16]

As a result of this conflict, however, Rogue and the X-Men learned of Destiny's journals, a collection of diaries written by the deceased precog that depicted the future of mutantkind. Soon afterwards, Storm decided that the Diaries of Destiny required special attention. Remembering the Onslaught disaster, she did not trust Charles Xavier with such power and, instead, gathered a select group of X-Men to aid her in searching for the diaries: 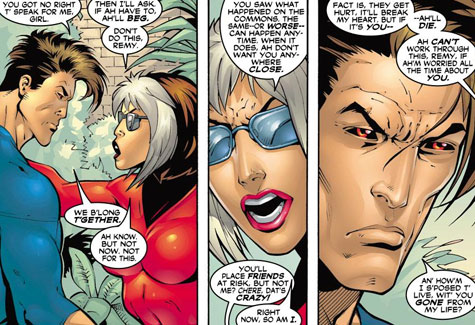 Rogue, Beast, Bishop, Psylocke, Thunderbird and Sage. They left Westchester quietly in the dead of night and cut all ties to their former colleagues, except Wolverine, who would act as a liaison. Gambit would have liked to accompany the team, but Rogue vetoed this, fearing to accidentally hurt or kill Remy with her haywire powers. Though already bad enough to endanger friends and teammates, she could not stand to risk the life of her lover. [X-Men (2nd series) #109]