The X-Men were officially established again, with the original five X-Men and several other former members returning to the fold. In fact there were enough X-Men to divide them into two squads. Rogue was assigned to the Blue Strike Force led by Cyclops. Also on the team were Wolverine, Beast, Psylocke and Gambit. The first mission of the new team involved battling Magneto, the man she might have loved. Rogue found she didn't have any lingering influence on Magnus, however, as the Master of Magnetism didn’t listen to Rogue’s attempts to stop the fight and attacked her without remorse. [X-Men (2nd series) #1-3] 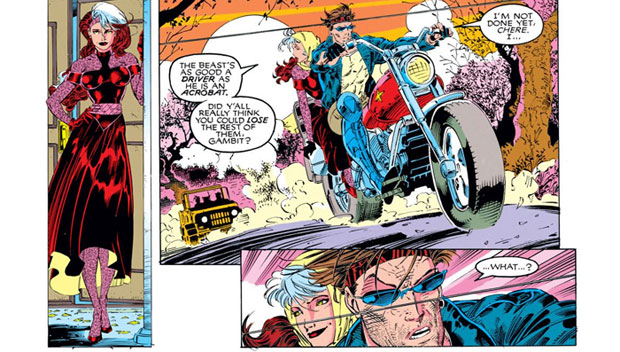 Gambit continued to pursue Rogue, despite the awkwardness of their first encounter and the challenge posed by her mutant abilities. Rogue was quite taken by the Cajun X-Man and, while she kept her distance emotionally, they began dating regularly. [X-Men (2nd series) #4] 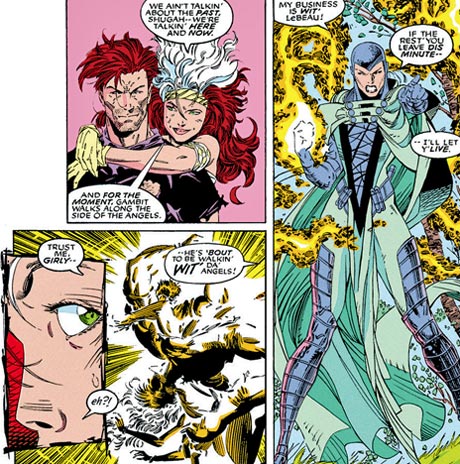 Gambit was a man of secrets and mysteries. Just like Rogue, he kept his real name secret, only for the time-traveling X-Man, Bishop, to reveal it as Remy LeBeau and accuse him of eventually becoming a traitor to the team. Though she knew neither man well, Rogue sided with Gambit in this conflict, reasoning that the Cajun couldn’t be held accountable for something he had not yet done. However, when later that day a woman showed up at the X-Men’s doorstep, claiming to be Gambit’s wife, she was not sure about trusting Gambit anymore. Gambit explained the rivalry between his Thieves Guild and the Assassins Guild of Belladonna Boudreaux, and their marriage was arranged to bring peace between the families. After he killed her brother Julian in a duel of honor, however, Gambit was exiled from New Orleans and hadn't seen Belle since that day. Belladonna seemingly died shortly afterwards, leaving much unspoken between Rogue and Gambit. [X-Men (2nd series) #8-9, Ghost Rider (3rd series) #27] 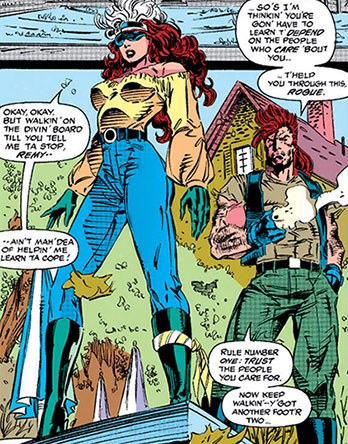 Weeks later, Stryfe's assassination attempt on Xavier with a special form of the techno-organic virus united all of the X-teams to hunt the villain down during the X-Cutioner’s Song. In battle with his minions, the Mutant Liberation Front, Rogue’s eyes were damaged by Strobe’s heat blast. Temporarily blinded, Rogue was taken off the active roster and took some time to recover. Gambit helped Rogue cope with the situation in his own, special way. He showed her the difference between trust and blind faith by letting her walk off a springboard but catching her before falling. Also, with him as navigator, Rogue even flew, though still not being able to see a thing. [X-Men (2nd series) #15-19]

Rogue's feelings for Gambit grew and, after her sight had returned, the pair spent a romantic night out in New York. They expressed their feelings to each other, admitting it was time to move past flirting and teasing to commit to a real relationship, though neither of them was ready to be that exposed yet. Rogue even offered to tell Gambit her real name but he declined, saying that names didn't say anything about who a person is. [X-Men (2nd series) #24]

Not much later, Gambit was called back to his home to avenge his brother's death and Rogue accompanied him. During their stay in New Orleans, they discovered Bella Donna was alive, though in a coma. Rogue accidentally absorbed part of Bella Donna's mind while tending to her bedside. Along came the memories of the happy times Belle spent with Gambit – kissing, touching and loving one another – all things denied to Rogue. For a split-second, Rogue was tempted to touch Bella Donna again and permanently absorb the memories, but she reminded herself that it was wrong to take what wasn't offered. [Gambit (1st series) #1-4] Nevertheless, pieces of Belle's mind lingered in Rogue's subconscious for weeks after, leaving Gambit somewhat unsettled. [X-Men (2nd series) #34]

Back at Westchester, Rogue was part of the X-Men team that succeeded in bringing in Sabretooth, who began living in the detention chambers beneath the mansion. [X-Men Unlimited (1st series) #3] Sabretooth knew enough about Gambit's past to taunt Rogue with some bits and pieces. When she finally asked for more, he told her about Paris, where Gambit made a girl named Genevieve fall in love with him just so he could steal a jewel that she herself stole. Remy later let the girl die when Creed forced him to choose between her and his brother. This haunting story stayed with Rogue for weeks, not sure as to whether she should continue to risk her heart with the Cajun. However, in time, both of them agreed to work through their differences and finally confronted Sabretooth together. [X-Men (2nd series) #33, 38] 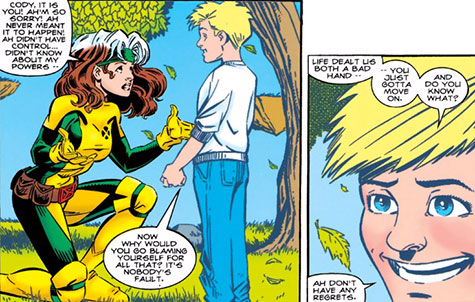 in retaliation for Rogue stealing part of her mind. Rogue and Gambit followed the Assassins and, in the final battle against Bella Donna and the External, Candra, Cody died, after over a decade being in a coma. Tante Mattie, the Guilds' spiritual healer, arranged a last meeting between Cody and Rogue on the astral plane. The boy held no grudges against Rogue. In fact, he knew that Rogue was not to blame for not having known about her mutant powers. Before departing to the afterlife, Cody told Rogue to move on. [Rogue (1st series) #1-4] 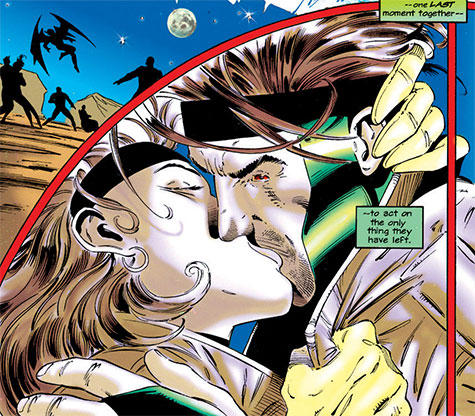 Both Rogue and Gambit were with the X-Men in Israel when the M'Kraan Crystal was about to destroy Earth and the rest of the universe as well. Just as the crystal wave struck, Rogue took her final chance and kissed Gambit passionately, thinking it to be their last seconds together. [X-Men (2nd series) #41]

However, though the crystal wave seemingly washed over without effect, the timeline had actually been warped into an alternate reality, and then rebooted again.  When reality was restored, Gambit was left comatose from Rogue's kiss, with Rogue possessing a large part of his memories and dark secrets. It was too much for her to deal with properly and, confused, she ran away from the X-Men to wander the country. 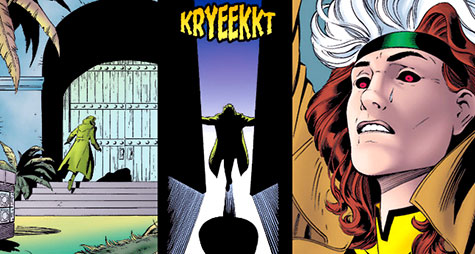 Iceman volunteered to go with her and keep her company. After a few days, Gambit awoke from his coma and chased them down. When he found them, Rogue told him that she didn't know exactly what she had seen within him, only that it was something terrible and that it had been haunted him ever since. As Gambit wouldn’t confide in her and outright tell her what his dark secret was, Rogue reasoned that, if they couldn't trust each other, they also couldn't love each other. She then quit the X-Men for good, having a lot to think about. [X-Men (2nd series) #42-45]

Rogue moved to South Carolina and began working as a waitress. She was found, however, by operatives of Operation Zero Tolerance. They kidnapped her and were preparing to kill her when one of the OZT soldiers started throwing off magnetic pulses, freeing Rogue and taking down Bastion, the head of Zero Tolerance. He revealed himself to be Joseph. Rogue was unsure how to handle the man in front of her, 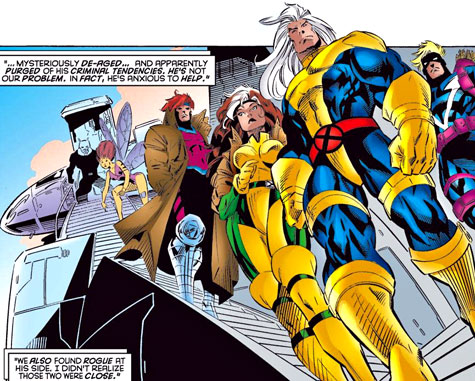 as he seemed to be a de-aged and amnesiac Magneto. In truth, Joseph was a clone of Magneto, though Joseph himself was unaware. Together, the two began traveling by car to reach the X-Men, but Onslaught happened first. [X-Men Unlimited (1st series) #11] The X-Men and Avengers had teamed up to defeat Onslaught and had learned that Magneto might have caused Xavier's change into Onslaught, somehow. Therefore, an Avengers/X-Men team, consisting of Captain America, Gambit, Vision, Iron Man, Thor and Magneto's children, Quicksilver and the Scarlet Witch, were sent out to find and subdue him. They encountered Rogue and Joseph and, after a short battle, were convinced of “Magneto" having genuinely changed for the better. Rogue and Joseph traveled back to New York with the Avengers and X-Men team to confront Onslaught. [Avengers (1st series) #401, X-Men (2nd series) #55] 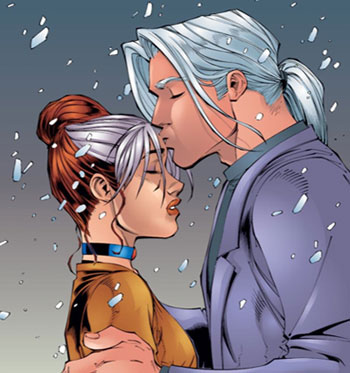 After Onslaught was destroyed, Rogue and Joseph joined the X-Men. Rogue was attracted to both Joseph and Gambit, causing intense friction between all three. Joseph thought night and day about a way to cure Rogue’s condition and finally he came up with a modification of the Z’Nox chamber in the mansion’s basement. Originally used by Xavier to shield his mind from alien detection, Joseph had modified the necessary equipment to shield himself from any power transfer while giving Rogue a Christmas kiss. [Uncanny X-Men (1st series) #341]