Everyone was having a tough time dealing with the memories of the reality warp. Many chose to have them removed by Emma Frost but Rogue decided to keep hers, as she had absorbed the memories of many dying people and she didn’t want them to disappear. To make matters worse, the events in the Age of X had once again stirred up her feelings for both Magneto and Gambit. In the end, Rogue decided to give in to her feelings and she chose Magneto. [X-Men Legacy (1st series) #248-249]

Legion became the focus once again when it became known that a number of his personalities had escaped into the real world. Rogue was a part of the team that was tasked with tracking down and eliminating them before they hurt anyone. They tracked the first one down and, after Rogue made contact with it, she discovered the location of the other five escapees. 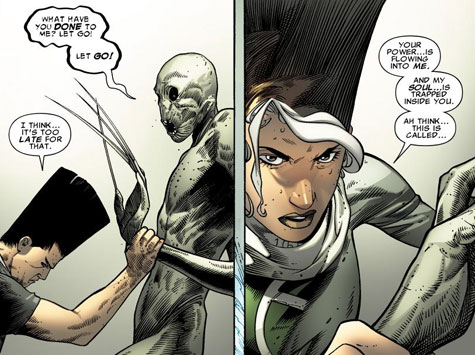 They travelled around Europe collecting the rest but, when they engaged one known as the Bleeding Image, he blew himself up and critically injured Rogue. As she recuperated, the rest of the team tracked down Xavier, who had been kidnapped by the worst of the personalities, Styx. Thankfully, Rogue was strong enough to enact a bait-and-switch plan to defeat Styx, by disguising herself as Legion to get close to him. She then touched the errant personality, weakening him long enough for the real Legion to absorb him back into his consciousness. Styx had one final trick up his sleeve, however, and he managed to drag Rogue into Legion’s mind as well. Rogue had the laugh last, though, as she had dealt with Legion’s mind before and she easily managed to outwit Styx. [X-Men Legacy (1st series) #250-253]

The whole experience with Legion actually helped Rogue in another urgent situation that had recently arisen. Before she set off to track down Legion’s personalities, Rogue had met with a mysterious exile from the Age of X. The woman, who turned out to be Rachel Grey, was in an incorporeal form and was fading away fast. 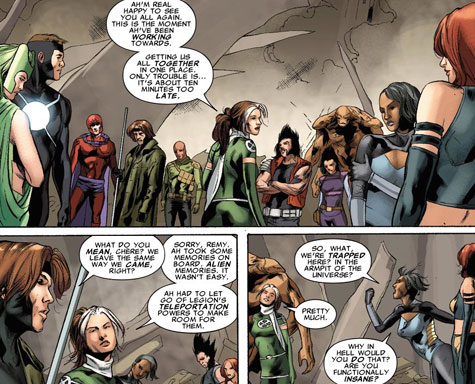 She had made contact with Utopia as she was across the other side of the galaxy and in dire need of help. When Rogue gained access to Legion’s mind and his array of powers, she decided to borrow some to help Rachel and the others with whom she was stranded. She teleported her team across the universe and on to a space station that was currently falling into a sun. There, she ran across the same Sh’iar salvage crew she had met a few months before in the Australian Outback. After saving Rachel and forming an uneasy alliance with the salvage crew, Rogue made her way to the rest of her team, which had been scattered during the teleport. They also found the rest of the Starjammers, who were stuck in the middle of a Sh’iar civil war on the station. Despite opposition from the Sh’iar and the salvage crew, Rogue teamed up with the Starjammers and teleported the space station across the galaxy and into Earth’s orbit, saving everybody on board. [X-Men Legacy (1st series) #250, 253-258]

Whilst that had been transpiring, the situation on Utopia had taken a turn for the worse. Wolverine and Cyclops had come to blows and Wolverine left Utopia with a number of students in tow. Rogue had a decision to make as to whether she would stay on Utopia or join Wolverine at his new school back in Westchester. She sought the council of both Gambit and Magneto in the decision but they made it clear it was her choice to make. Rogue allowed herself to become distracted by another situation whilst she made up her mind. It had become evident that, when Rogue teleported everyone back to Earth, more people had come back than anyone realized. After some investigation, they discovered that Ariel, who was believe killed during Bastion’s earlier attack, was stuck on another dimension, mid-teleport.

Rogue gathered together a small team and together they saved Ariel and brought her back home. The distraction had worked and Rogue had made up her mind what to do. She told Cyclops that she loved looking after the students and she intended to go with Wolverine so she could continue doing it. [X-Men Legacy (1st series) #259-260]

Although Rogue had moved to Westchester, Magneto had not. This put a strain on their play-it-by-ear relationship, as they did not speak for some time. However, once again, before Rogue could make a firm decision, another distraction came her way in the form of Exodus. He had heard that the X-Men had split up into two teams and he was angry at the way Cyclops and Wolverine had allowed it to happen. 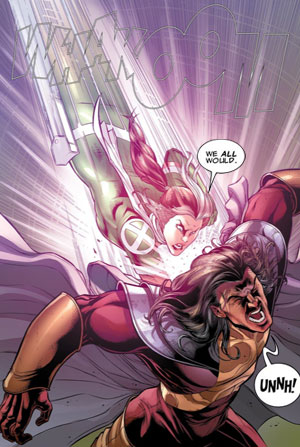 He saw the X-Men as being stronger when they were a whole and he demanded they return to Utopia. After an initial fight with the Westchester X-Men, Exodus set off towards Utopia, as he realized Cyclops was the main problem. Rogue and Wolverine were on opposing sides as to what to do. Whilst Wolverine set off in the Blackbird to fight Exodus, Rogue stayed behind and contacted Utopia. She then caught up with the X-Men, who were engaged in battle with Exodus. When Wolverine found out Rogue had contacted Utopia, he was furious and they came to blows in the middle of the fight. When help from Utopia came, it was not what Rogue had wanted. Hope Summers had brought her student allies along, which was exactly what Wolverine didn’t want to happen. Exodus was eventually beaten but the damage between Rogue and Wolverine was more severe. After the fight, he made it clear that he could no longer trust her to follow orders. [X-Men Legacy (1st series) #261-263]

Rogue was on hand to help Michael Pointer aka Weapon Omega when his friend Mimic brought him to the school in dire need of help. Michael could not stop absorbing other mutant’s powers and was losing control. He accidentally absorbed Mimic’s powers but, because Mimic wasn’t a mutant, something went wrong and Michael was primed to explode. 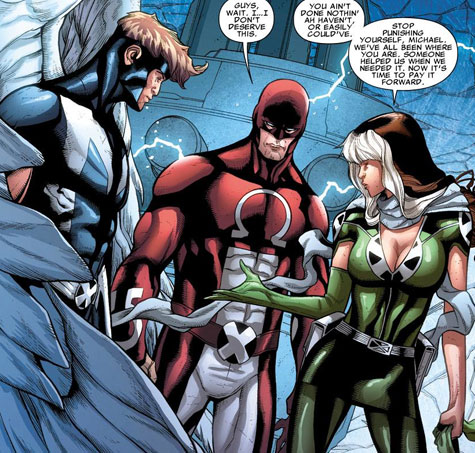 Seeing someone having trouble with their absorption powers rang a bell within Rogue and she offered to help. However, when she and Mimic tried to absorb Michael’s powers, something went wrong and they also turned into bombs. With time running short, she tried numerous ways to dissipate the power raging inside her. In the end, the three of them ended up absorbing each other’s powers at exactly the same time, shorting each other out. Unfortunately, it didn’t work for Michael and so he was placed in stasis until a solution could be found. [X-Men Legacy (1st series) #264-265]

When the Phoenix Force returned to Earth, the X-Men and Avengers were on opposing sides as to how to handle it. The Avengers saw it as a threat to the world but the X-Men thought it would save the mutant race. It soon became clear that Hope Summers would play a key role in the outcome but she went on the run once she realized what was happening. The conflict brought back bad memories for Rogue, as she had fought the Avengers before when she was a part of the Brotherhood. She opted to stay out of it and look after the students at the school. Unfortunately, when some Avengers came to the school to stand guard, tempers flared and a fight broke out. Rogue ended up going toe-to-toe with She-Hulk and her team and pretty much took them down single handedly. After that, she realized there was no sitting on the sidelines and joined the rest of the X-Men in the search for Hope. [X-Men Legacy (1st series) #266-267] 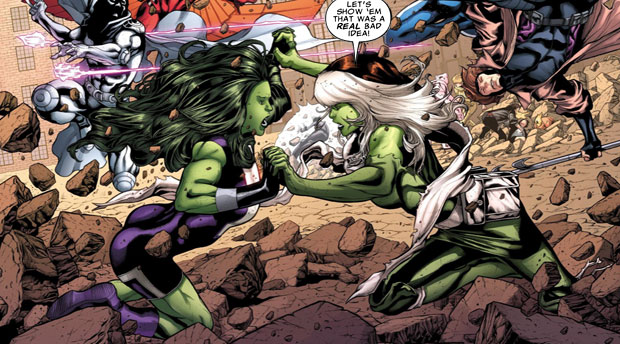 Things took an unexpected turn though when Iron Man tried to destroy the Phoenix Force, only to split it into fragments, which subsequently inhabited five of the X-Men. The Phoenix Five, as they were dubbed, set about curing the world’s problems, such as drought, hunger and war. The Avengers were still wary of the situation, though, as they believed it was only a matter of time before the Phoenix Five lost control of the power. Rogue was enjoying using her powers, as she was now able to help heal the world instead of constantly fighting to protect it. When Rogue was helping out in New Orleans, she received a call about a helicopter in distress not far away. However, when she got to the location, she was surprised to find Ms. Marvel waiting for her. With the tensions between the X-Men and Avengers at an all time high, Rogue wasted no time and immediately attacked Carol. Carol tried to speak to her calmly but Rogue wouldn’t listen and even tried to absorb some of her powers. 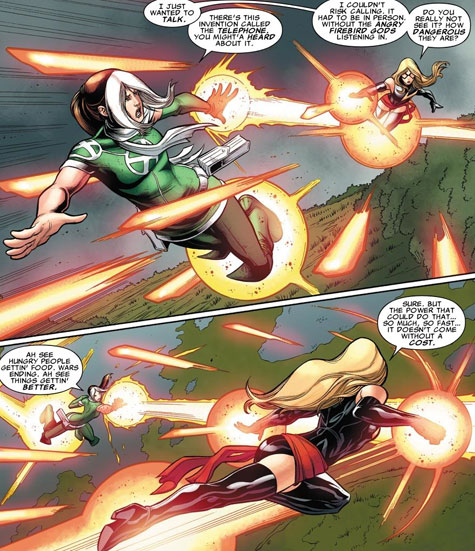 Carol was infuriated that Rogue would try something like that again, given their history, and so their scuffle became an all out brawl. Carol tried to make Rogue see that the X-Men who were possessed by the Phoenix Force were an accident waiting to happen. Rogue wouldn’t listen and she eventually defeated Carol and had Magik send her to prison.

After the battle, Carol’s words started to get to Rogue, especially when she saw the prison in which Carol was placed. Magik, one of the Phoenix Five, had brought a chunk of Limbo to Earth and was using it to trap the Avengers in a literal Hell. After seeing how sadistic Magik had become, she decided that Carol was right and something had to be done. She found Carol and hatched a scheme to steal Magik’s teleportation power. However, the Phoenix Force blocked the power transfer and Rogue was captured. Instead of imprisoning her, though, Magik sent her to an alien dimension out of the way of the conflict. [X-Men Legacy (1st series) #269-270]

Rogue landed on a planet, right in the middle of a battle between two alien races. Still possessing some of Ms. Marvel’s powers, she smashed her way out and flew to safety. One of the alien species, the Vray, found Rogue and asked her to join their side in return for sending her home. She accepted but, before she could help, she was kidnapped by the opposing race known as the Swarm. The Swarm were a hive-minded race that wanted to have the Vray become like them. As Rogue navigated the situation, she found out that the leaders of both sides had been conspiring together to keep the war going in a bid to keep the population levels down. Rogue revealed the secret to both sides and they turned on their leaders and made peace. With the war potentially over, the Vray used their magic to send Rogue back to Earth. [X-Men Legacy (1st series) #271-273] 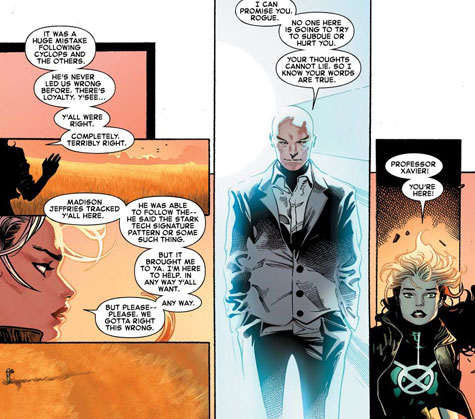 During Rogue's absence, Ms. Marvel’s predictions had come true. One by one, the Phoenix Five had lost control of their power until they lashed out and were beaten down by the rest. Only Emma Frost and Cyclops remained, whilst the rest of the X-Men had seen them for what they were. Rogue led the X-Men and they sought out the renegade Avengers. Standing before them, she declared that she had been wrong and they needed to work together to take down Cyclops and Emma. With peace being declared, the heroes took the fight to the last two possessors of the Phoenix Force. The fight was brutal and things took a tragic turn when Cyclops turned into Dark Phoenix and murdered Xavier before everyone’s eyes. [Avengers vs X-Men #11-12]