Rogue, Gambit and Danger stayed in the Australian Outback town for a bit but a call from Cyclops brought them back to the X-Men. Whilst Rogue had been on her own journey, the X-Men had relocated to San Francisco in an attempt at a fresh start. Still, trouble had followed them and political activist Simon Trask was trying to pass a statewide petition that would forbid mutants to reproduce. 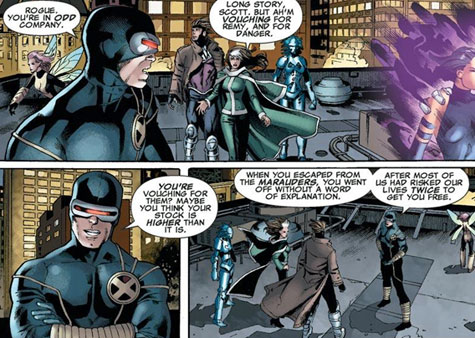 When protests on both sides of the issue led to riots, Norman Osborn saw an opportunity to assert control over the X-Men and declared them outlaws. Rogue and her team arrived in the middle of the unrest, just in time to help in the hunt for missing students across the city. When faced against Osborn's "Dark Avengers," Rogue ran into trouble in the form of Ares and Moonstone, who was in the guise of Ms. Marvel in Osborn’s personal team of Avengers. After losing an initial skirmish, Rogue came back and defeated both foes whilst saving the young mutant Trance in the process. Osborn and his troops were eventually beaten but the X-Men decided to leave the main city and relocate to the newly-created island of Utopia. [Utopia crossover]

As the X-Men were settling into their new home, Cyclops approached Rogue and asked her to once again become a counselor for the younger generation of mutants. Despite seeing it as a punishment for mistakes she made during her last attempt at leading a team, Rogue told him she would think about it. 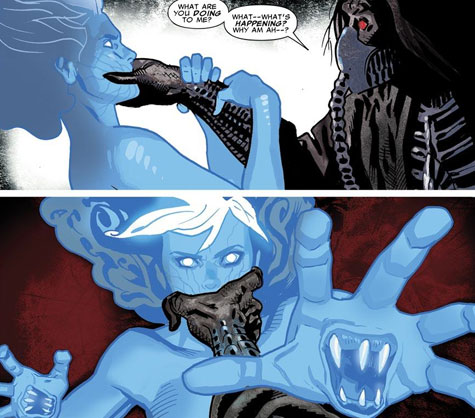 She didn’t get much time to do that, though, as Emplate decided to attack the X-Men. Since M-day, the mutant vampire’s food source had diminished and he was forced to launch an assault on the X-Men. After he took one of the students, Bling!, back to his own dimension to feed off, Rogue used some powers borrowed off Trance to enter his dimension to rescue the student. After saving her and defeating Emplate, Rogue decided to take up Cyclops on his offer of watching out for the students. [X-Men Legacy Annual #1, #228-230]

When Selene resurrected an army of dead mutants in a bid to become a god, among the number brought back was Destiny. Despite Selene's control, Destiny tried to send a telepathic message to Rogue but ended up speaking to Blindfold, another precog, who was living on Utopia. She warned her that Muir Island would be home to a great threat if the X-Men didn’t intervene. Whilst an army of undead attacked Utopia, Rogue and a team of X-Men travelled to Muir Island. Amongst the team was Magneto, who had recently joined the X-Men. He made it very clear to Rogue that he still retained romantic feeling for her but she knocked back his advances.

When they first arrived at the island, Rogue's team found no trace of a threat, but the danger soon became apparent as Blindfold had become possessed by Proteus, Moira Mctaggart’s reality warping son. Proteus quickly beat the X-Men and took control of them one-by-one until only Rogue and Magneto remained. Whilst Rogue managed to free her team from Proteus’ corruption, Magneto took him on personally and defeated him. 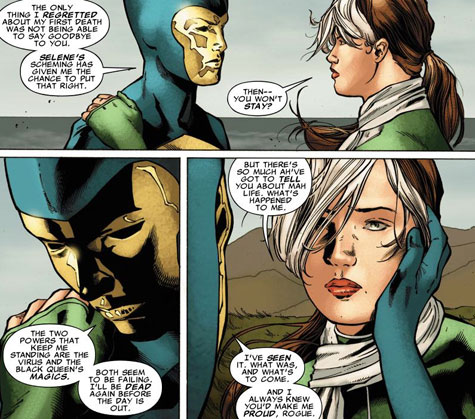 The silver lining to it all was that Rogue had been able to speak to Destiny one last time. Her foster mother had managed to escape from Selene and had flown to Muir Island. She told Rogue that she would be dead before the day was out but was pleased she could say goodbye, which she was unable to do last time. She also told Rogue that she was proud of her and then left her a cryptic message, saying that she was bound to "the child" in ways that matter. Rogue said her goodbyes and then left Destiny to pass away again. [X-Men Legacy (1st series) #231-233]

Soon after, Rogue was called upon by the Stepford Cuckoos to absorb some of their powers so they could look for the Phoenix Force without it detecting their telepathy. With the aid of the telepathy, Rogue went about her counseling duties amongst the students. However, when she talked to Gambit and Magneto, she ended up finding more than she bargained for when she realized that both still had romantic feelings for her. [X-Men Legacy (1st series) #234]

When Cable and Hope, the first child born after M-Day, returned from their journey through time, they were immediately targeted by the robot Bastion and his anti-mutant forces. The X-Men quickly sent out various teams to track Hope, now a teenage girl,  to bring her back to the safety of Utopia. However, Cable was doing everything in his power to avoid both the X-Men and Bastion’s forces. It was Rogue who proved to be a surprising element in tracking them down. Rogue was channeling Hope’s thoughts and feelings, even though Emma Frost scanned her mind and found no empathic link. Cyclops put his faith in Rogue and sent her off to meet with Wolverine and his team, which were in the field trying to find Hope. Using her intuition, Rogue guided Nightcrawler to a small trailer park in the middle of nowhere. 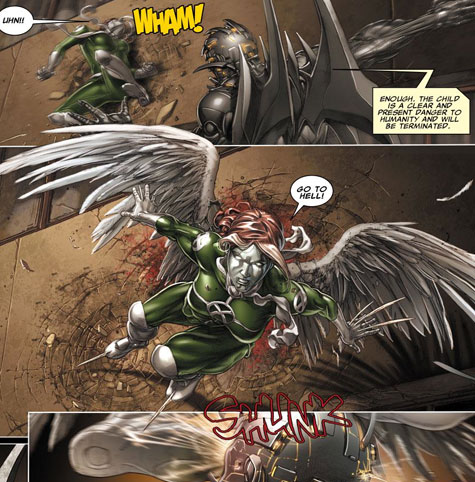 There they found Cable and Hope but unfortunately Bastion’s forces had found them as well. Rogue absorbed the powers of the entire squad of X-Men so she could act as Hope’s bodyguard, after which Nightcrawler teleported both her and Hope across the country in a bid to get to Utopia. They made it as far as Las Vegas by which point Nightcrawler was exhausted from all the jumps. Before they had time to rest, Bastion tracked them down himself and attacked. Rogue took Bastion on in direct combat but, even with the array of powers she had absorbed, he still defeated her. Rogue watched helplessly as Bastion killed Nightcrawler, who sacrificed himself to save Hope.

As the X-Men buried Kurt and tended to their wounded, Bastion moved on to the next stage in his plan. He cut off the X-Men’s escape route and then erected a sphere around Utopia and San Francisco, trapping everyone inside. 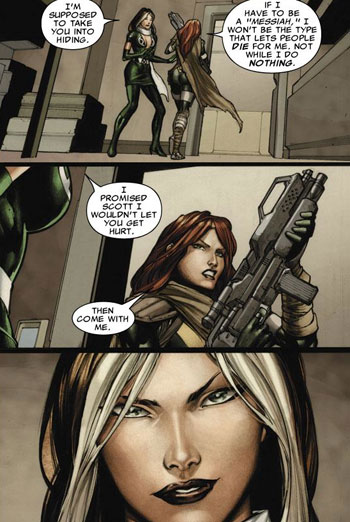 In the center of the sphere, he opened up a portal to an alternate future and unleashed wave after wave of futuristic Nimrod Sentinels upon the X-Men. Rogue was among then X-Men who fought the first few waves of Nimrods but she was soon injured like many of her teammates. It was eventually decided to send a squad of X-Men into the future to stop the army from the other side. Rogue was tasked with taking care of Hope and keeping her on Utopia. Hope was angry at being sidelined, as well as finding out that Cable had gone on the suicide mission to the future. When Rogue found her, Hope was in the armory, preparing to go fight the Nimrods. Rogue tried to convince her to stay but Hope made it clear she wasn’t going to. Instead, Rogue decided to go with her instinct and let Hope go into battle. The two made their way to the Golden Gate Bridge, the location of the portal, and arrived just in time to save Storm from a Nimrod. Soon thereafter, the squad in the future succeeded and the army was stopped. Bastion decided to confront Hope himself but she ripped him apart and ended his threat. [Second Coming crossover]

Things became strained between Cyclops and Rogue afterwards. She had gone against a direct order and allowed Hope into a deadly battle. Soon thereafter, Cyclops decided to send her to Mumbai with Indra, one of the students who had personal matters to attend to there. Accompanied by Magneto and a few other students, Rogue felt she was being punished for her earlier actions. Whilst they were there, they ran into the Children of the Vault again and thwarted an attempt to destroy the city. [X-Men Legacy (1st series) #237-241]

Rogue returned to Utopia and dived back into her duties as student counselor. Hellion had lost his hands in the recent battle with Bastion’s Nimrods and was spiraling out of control. Rogue decided to take his mind off it and get him to do something constructive. In the battle with Bastion, a great part of San Francisco was damaged and the X-Men were helping with the reconstruction work. 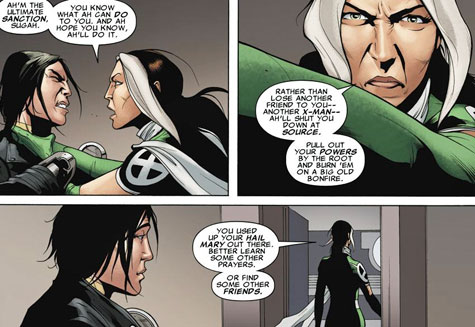 Unfortunately, Karima Shapandar was having a latent reaction to the virus that was used to destroy the Nimrod units. She lost control of her Sentinel parts and started attacking mutants. Hellion violently stopped her from hurting anyone but he ended up putting her in a coma. Angry at his remorseless attitude at harming a fellow X-Man, Rogue threatened that he had to shape up or she was going to remove his powers permanently. [X-Men Legacy (1st series) #242-243]

When Blindfold came to her with visions of an invisible threat on Utopia, Rogue helped her out by investigating all possible threats. Eventually, they found out that one of Emplate’s inter-dimensional portals was still active and a squid-like creature had come through. The creature was defeated and everyone believed the threat was over but Blindfold’s visions didn’t stop. [X-Men Legacy (1st series) #244] 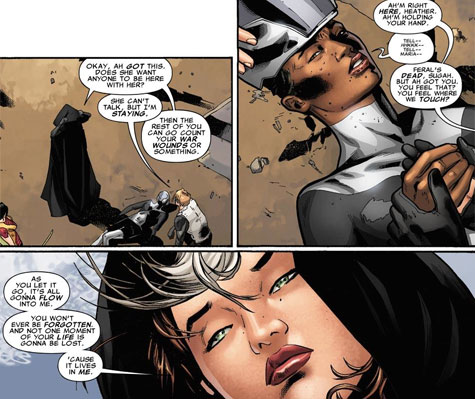 The true threat became apparent when Legion warped reality and created the Age of X. No-one remembered their true lives and instead were forced to live the illusion that they were defending their home of Fortress X from constant attack. In this reality, the remaining mutants had set up a force field around the fortress and did their best to stop the humans from getting in. The whole fortress was watched over by an unseen entity simple known as X. In this reality, Rogue was in a relationship with Magneto and she was now known by two names, Legacy and Reaper. When a mutant would die, she would absorb their memories and powers so that they would never be forgotten.

One day, Legacy wandered to one of the more secluded areas of the fortress and caught a person sneaking through the force fields. The threat was quickly neutralized but everyone was surprised to see it was Shadowcat who was supposedly locked away in the dungeons of the fortress. Legacy found a camera that she dropped and was intrigued by it. After she discovered that all the photos on it were blank, her curiosity was piqued. She broke into the dungeon and met with Shadowcat, who told her there was nothing outside the force fields and that someone in the fortress had sent her to investigate. 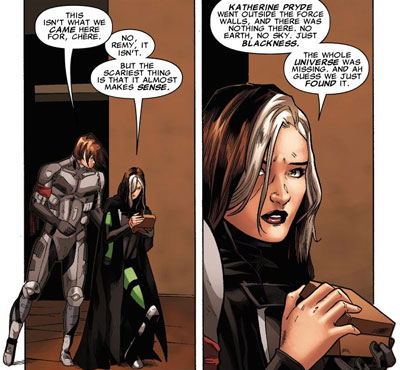 By now, X was onto Legacy and the rest of the fortress was alerted to her actions. She went on the run and, whilst everyone else in the fortress was against her, she found an ally in Gambit. The two were seemingly killed by Magneto but it was all a ruse so that he could talk to them without X hearing. He explained that something wasn’t right with the fortress and he had sent Shadowcat to investigate. Legacy and Gambit headed off to a section of the fortress that Magneto believed held the key to it all. When they got there, they found Dr. Nemesis frozen in time and a small box containing their entire universe. With the secret out, the true threat emerged. X was in fact Moira MacTaggart, who had been created by Legion when he warped reality. In the real world, Legion had been having psychic therapy to contain his multiple personalities but he subconsciously resisted and created the new reality where he was a hero. With the reality unraveling around him, Legion decided to revert everything back to the way it was. [Age of X crossover]