In light of the many recent ups and downs in their relationship, Rogue and Remy decided to get professional help in the form of the X-Men’s own sex-therapist, Emma Frost. Not only did she advise them to sleep in the same room, to gain some form of intimacy, but also she promised to help the pair with some special telepathic therapy.

However, Rogue’s dark past continued to catch up with her, as the picture from a few years ago was shown on national television – portraying her, Sunfire and Mystique. Marked as a criminal, Rogue started to investigate, only to find herself under attack by Lady Deathstrike. At first, she thought Sunfire had sent the cyborg woman after her. However, when she sought him out in Tokyo, she found that he too had been set up and that he had also no knowledge about when or where the photo of them had been taken. Further investigation revealed that Lady Deathstrike believed them to be responsible for the adamantium bonding process having been stolen from her father, and she was using Blindspot to hunt the two X-Men down. When they confronted Lady Deathstrike in her hideout, Sunfire’s legs were severed by the cyborg and Rogue surrendered in order to prevent him from getting killed.

Locked away in some prison cell, Rogue was visited by Blindspot, who gave her back the missing pieces of her memory, so that Rogue could remember the time they shared in the past. Blindspot revealed that she had been forced into service by Deathstrike and plotted escape with Rogue. More dead than alive, Sunfire suggested for Rogue to absorb his flame powers but, considering his condition, she found it too risky. Blindspot did not have such quarrels, though, and pushed Rogue against Shiro’s face, making her permanently absorb his powers. Both with Sunfire’s atomic flame 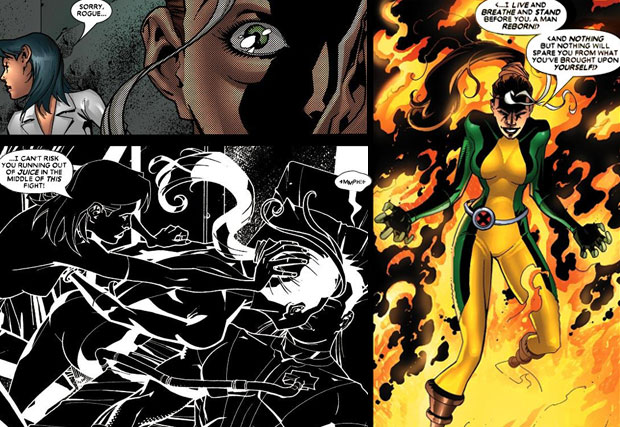 and his hotheaded attitude in herself, Rogue went out for the fight and attacked Lady Deathstrike, destroying parts of her cybernetic body. When Blindspot tried to manipulate Rogue into doing her bidding, the Sunfire aspects in Rogue recognized her as an enemy and wanted to kill her as well. However, Blindspot quickly used her powers, making Rogue forget everything that had happened over the last few years, so that she believed herself to be a member of the Brotherhood and best friends with Blindspot again. As such, Rogue even attacked her fellow X-Men when they came after her, concerned over their missing teammate. However, as soon as Rogue looked into a mirror, she realized that she was a lot older than she believed herself to be and realized something was wrong. She then pressed the truth out of Blindspot and made her understand that it was wrong to manipulate someone into friendship – trust and respect needed to be earned. After Blindspot fully restored Rogue’s memory, she returned to the X-Men, who then checked out the place where Deathstrike had held her captive, only to find it empty. Neither the cyborg woman nor Sunfire’s body were to be found. [Rogue (3rd series) #7-12]

Back in Westchester, Rogue and Remy continued their therapy sessions with Emma Frost. The telepath took both of them to the astral plane, so that they could share some intimacy there, without making any actual physical contact. 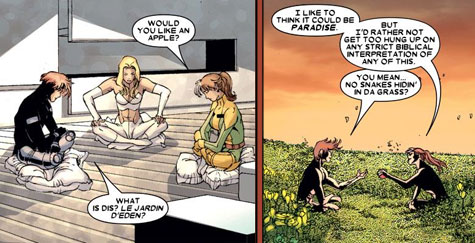 However, due to all their psychic baggage, they couldn’t safely touch even there. The instant they tried, Remy’s astral form was drained the same way his physical body would have been, had they actually touched. Another problem arose in Foxx, a recently enrolled, very attractive female student at the mansion. While Gambit resisted all of Foxx’s attempts to seduce him, the damage was already done, since he sure found himself attracted to her and this attraction even showed in their telepathic counseling sessions with Emma Frost. [X-Men (2nd series) #171-172]

Rogue became distrustful of both Remy and Foxx. Things came to a head when Emma revealed not only that Foxx was Mystique, 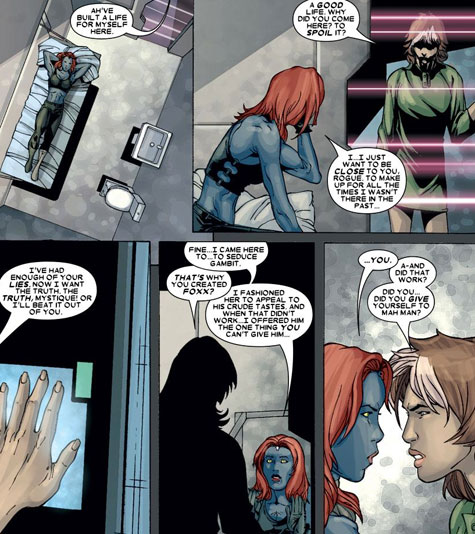 who had created this identity to make her adoptive daughter understand she couldn’t be happy with a man like Gambit, but that Gambit knew before she did. Rogue was furious with the both of them and, when Mystique revealed she wanted to join the X-Men, she was strongly opposed to the concept. Still, Emma told her that all the senior X-Men would vote on the decision. When the time came to vote, Rogue remained dead-set against it, even after Mystique’s heartfelt plea. Ultimately the rest of the X-Men chose to give her probationary membership but, when Rogue went to tell her, she found she had escaped the mansion. [X-Men (2nd series) #173-174]

Rogue and Remy’s relationship became very strained after that. On a mission to Wakanda, they spent most of the time bickering between themselves. [X-Men (2nd series) #175-176]

When M-Day hit, Rogue was one of the few mutants to keep their powers. The Xavier Institute was in disarray with various X-Men and students depowered, a situation exacerbated by the arrival of Val Cooper and her squad of Sentinel robots. Ostensibly, the Sentinels were there to protect the remaining mutants who now constituted an endangered species, but as they were not allowed to leave the human-piloted robots were more like prison guards. Tempers soon rose and, in the inevitable fight between the mutants and the Sentinels, Gambit was injured. This, along with the mass depowering, had forced Rogue to take perspective of things. She began to let herself get closer to Remy again. [X-Men (2nd series) #177-179]

Just as Rogue was rekindling her relationship with Remy, Mystique returned with a surprise in tow. She had made no secret of her dislike for Gambit and had actively tried to break them up before. Now she had recruited a man named Pulse and brought him to the Institute especially for Rogue, as he was able to touch Rogue without her absorbing his life-force. Rogue made it clear to him that nothing would happen between them but that didn’t stop her talking to him. Things took a turn for the worse when Apocalypse showed up on the X-Men’s doorstep and began enacting his latest plan on them. When he unleashed his latest version of Famine, Rogue ended up battling him. She was shocked to see that it was actually Sunfire and was immediately worried she had been the one to cause his current situation. Things hit their lowest point for Rogue when she saw that Gambit had been transformed into the new Death. 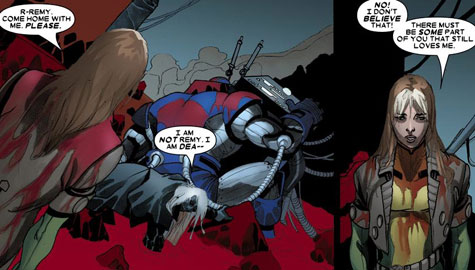 After being manipulated by Mystique, he had gone to Apocalypse willingly with the intention of bringing him down from the inside. However, the changes Apocalypse bestowed on him were so thorough that he lost control over who he really was. Rogue tried to snap him out of it and make him remember that they loved each other, but it was to no avail. It was only the timely arrival of Mystique and Pulse that saved her life. Apocalypse was ultimately defeated but there would be no celebration for Rogue. Gambit had been beaten during the battle but Sunfire had taken him away to locations unknown. [X-Men (2nd series) #181-186]

Though she remained worried about Remy, Rogue still couldn’t help slowly getting closer to Pulse. Mystique didn’t help matters though by blatantly pushing the two towards each other. 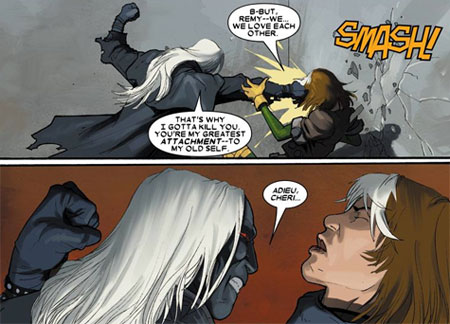 When Remy and Sunfire returned to the Insititute looking for their fellow horseman Polaris, Rogue immediately squared off against her former lover. She tried to make him remember that they loved each other but once again that tactic didn’t work. Gambit was convinced that, in order to fully let go of his former life, he needed to kill her. He was about to finish her off when Pulse weakened Gambit enough for Rogue to break free of him. When Sunfire realized Polaris wouldn’t be joining them, he found Gambit and carried him away. Rogue was left devastated by Gambit’s actions and sought comfort with Pulse. However, when he tried to make romantic advances on her, she rejected him and said she was through with romance. [X-Men (2nd series) #187]

After that, Rogue adopted a new costume and a slightly colder attitude to go with it. When the X-Men were alerted to a telepathic distress call coming from a hospital, Rogue was included in the team sent to answer it. The team met with resistance upon arrival, with some falling in battle, but Rogue took the initiative and held against their foes whilst the rest of the team tracked down the origin of the distress call. They discovered it was coming from Regan Wyngarde aka Lady Mastermind, who was trapped in a coma in a science laboratory. Alongside her, they found the disassembled fragments of Karima Shapandar aka Omega Sentinel. The only clue the X-Men found as to who was keeping the two women there was the name “Pan.” 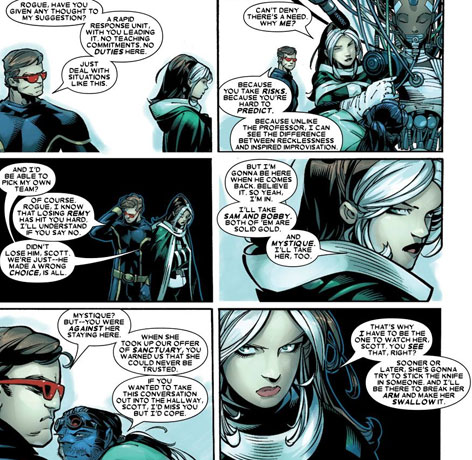 Upon returning the women to the Institute, Cyclops commended Rogue for her actions and offered her the chance to lead her own strike force. When he said she was allowed to pick her own team, she immediately chose Cannonball and Iceman. She also decided to put Mystique on her team. When questioned by Cyclops as to her reasoning, she told him that she was sure Mystique would betray them and wanted to be there to punish her when she did.

The arrival of Sabretooth to the Institute managed to confuse matters further. He was fleeing from a group called the Children of the Vault and sought refuge with the X-Men. As they begun to question him, the Children sent a brainwashed Northstar and Aurora to kill Sabretooth and any X-Men they found. Rogue managed to absorb some of Northstar’s speed and go toe-to-toe with him, but his experience at hyper-velocities won out and would have killed her but for the intervention of Cable. 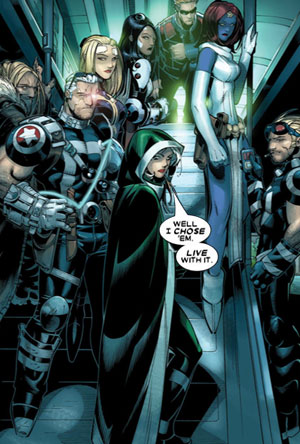 After the twins were defeated, Cable used his powers to read Sabretooth’s mind and discover the origins of the Children. Rogue decided to take the fight to the Children but what she didn’t realize was they were already coming for the X-Men. Their ship was capable of flight and was already over US airspace. Rogue assembled her team, adding Lady Mastermind, Sabretooth, Cable and Omega Sentinel to it. Cyclops did not agree with her roster but Rogue told him she was given rein over her own team and he would have to live with her choices.

On the journey to intercept the Children, Mystique tried to patch things up with Rogue but her daughter told her in no-uncertain terms that she couldn’t be trusted. They reached the ship, the Conquistador, and boarded it. A brutal battle erupted but eventually Rogue and her team defeated the Children and stopped their war on humanity. [X-Men (2nd series) #188-193]