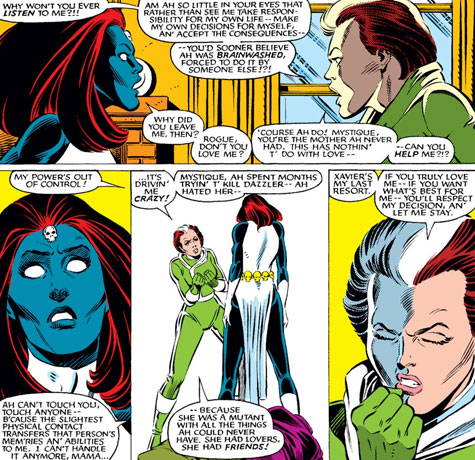 Naturally, Rogue's defection to the X-Men had not gone unnoticed to her adopted mother and Mystique soon tried to get her daughter back. While the Brotherhood kept the rest of the X-Men busy, Mystique infiltrated the mansion and knocked out Xavier. Initially, Mystique had been operating under the belief that Xavier must have been mentally controlled Rogue to make her abandon the Brotherhood but, after Rogue stated that it was her own choice to join the X-Men, considering that Xavier might be her last chance to learn how to control her power, Mystique reluctantly agreed and left. [Uncanny X-Men (1st series) #178] 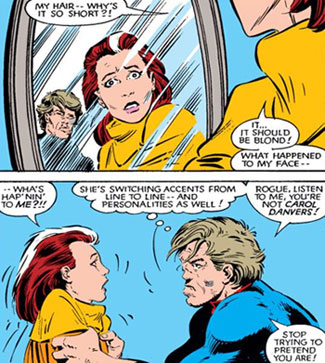 Checking the mansion’s answering machine after returning from a mission, Rogue found a message from Colonel Mike Rossi, asking for help. Hearing the voice of the former lover of Ms. Marvel, Rogue immediately went to help him and rescued him from the SHIELD Heli-Carrier. Without realizing it, she accessed memories and personality traits of Carol Danvers, even her voice and accent changed. Finally, after snapping out of it, she understood the full amount of her crime for the first time. She had stolen the very identity of Carol Danvers. Emotions, personality and memories, everything that had made her the person she was, was forever lost to Carol and locked away in Rogue’s head. [Uncanny X-Men (1st series) #182]

After being framed for murder, the government planned to use a prototype power neutralizer on Rogue. 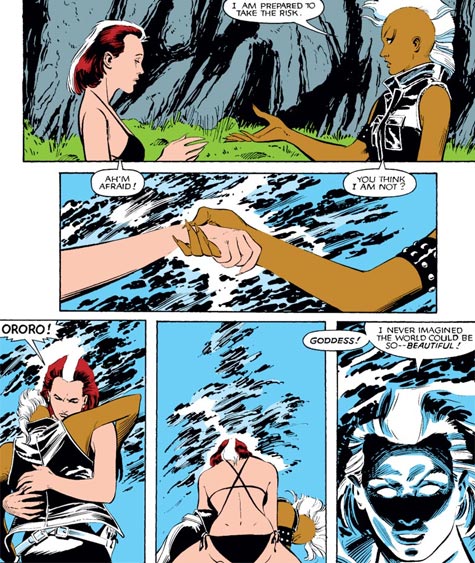 Mystique learned of this in her guise as a governmental employee and her information was confirmed by Destiny, who also had predicted the danger. They alerted Storm to Rogue’s whereabouts, as she had run away to her native area in Mississippi, feeling unable to deal with her life. After she had found her, Storm and Rogue finally sorted out their differences and Ororo proved her trust by volunteering to let Rogue absorb her power. Amazed by the way Storm saw the world in energy patterns, Rogue was tempted to absorb the weather abilities permanently but resisted, not wanting to betray the trust placed in her.

All of a sudden, Henry Peter Gyrich and his forces attacked and it became painfully clear that Mystique had not revealed the full extent of Destiny’s vision. Whoever would come to Rogue’s aid would have to take her place and it was now Storm who was hit by the power dampening blast meant for Rogue. [Uncanny X-Men (1st series) #185]

With Storm de-powered, Nightcrawler became temporary leader of the team and he tried to test Rogue for the seventh sense that Ms. Marvel had possessed. 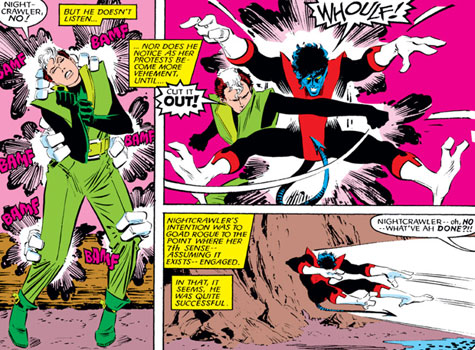 During his test of randomly teleporting and tickling her, Rogue was very annoyed and finally managed to hit the exact spot where Kurt would next appear. It seemed that she was only able to manifest this vague ability under great stress, and she had absolutely no interest to develop this ability any further. [Uncanny X-Men (1st series) #192]

When attacked by Nimrod, the Super Sentinel from the future, the X-Men were almost defeated. Buried under the rubble of a construction site, Rogue saw no other chance than to absorb the powers of her unconscious teammates all at once, even though it meant to risk permanent disfigurement by absorbing physical attributes like Nightcrawler’s tail and the steel skin of Colossus. The gamble worked, as Nimrod was confused by Rogue’s use of multiple mutant signatures at once. Since Rogue’s changed form reverted back to her regular appearance after the fight, she no longer had reservations against using her powers on physical mutations. [Uncanny X-Men (1st series) #194]

When the team later encountered Freedom Force, Rogue even drained the time-dancing witch Spiral and gained her six arms. However, with the magician having the stronger will, it was Spiral who controlled Rogue’s mind for the duration of the transfer. [Uncanny X-Men (1st series) #206]

During the Mutant Massacre, history seemed to repeat itself. Rogue was temporarily rendered vulnerable by Scrambler’s power canceling effect and, as she was about to be hit with one of Harpoon’s energy lances, her teammate Kitty Pryde jumped in between,

intending to phase both of them to safety. However, the energy spear interacted with Kitty’s intangible form, leaving her stuck in phased state. Rogue was saved, but once again at the prie of a teammate’s powers being screwed up. [Uncanny X-Men (1st series) #211]

Soon afterwards, Dazzler found herself attacked by the Marauders too and somewhat reluctantly joined the X-Men, as she by herself provided a too easy target. To get into shape, Dazzler excessively trained in the Danger Room and Rogue was not too pleased when she learned that Alison was running simulations with Rogue as the villain. However, after saving each other lives in battle against the Marauders, the two women sorted out their differences and made amends with each other. [Uncanny X-Men (1st series) #220-221] 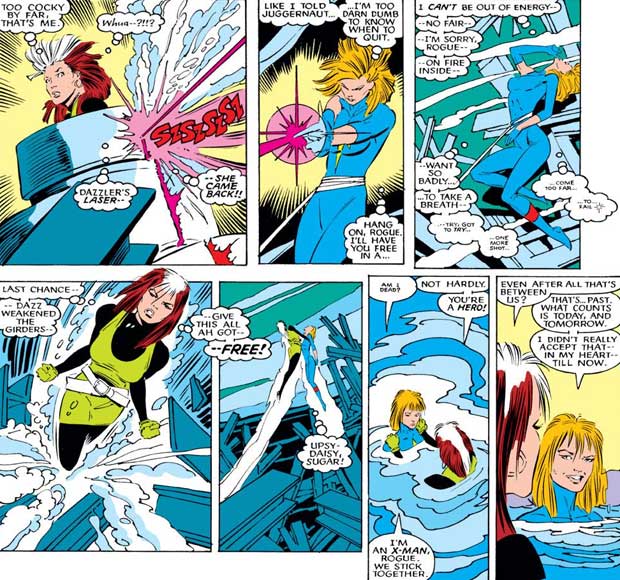