It’s been no secret that here at the UXN, we have quite a few Alpha Flight fans. Just look through our Spotlight On… and Character Profile section and the most casual observer will be able to determine this. So, when it was announced that Marvel was giving Alpha Flight a new miniseries, with the possibility of it becoming an ongoing, both Alpha Flight enthusiast and fan alike on the staff thought this would be a great time for UncannyXMen.Net to celebrate.

Originally, we never intended for the celebration to becoming a full-fledged Event Month. After all, we had said in the past that there would be no more of these type of events. However, as one article suggestion after another piled up, we realized we had more than enough for a full Event Month. Additionally, we wanted to surprise our fans and promote the new Alpha Flight series as much as we could. The entire celebration of Alpha Flight ran through all of June to coincide with the release of the first issue of the new Alpha Flight series.

One major difference with the Alpha Flight Event Month was that very few at UXN contributed to the Event. The majority of the articles were written by, arguably two of the most passionate and dedicated Alpha Flight fans around - Peter Luzifer and myself, Daytripper. Monolith contributed to two of the lengthier articles - the two Spotlight On…’s. Editing duties and image arrangement were handled by the ever capable Douglas Mangum, Peter Luzifer, Binaryan and Ruth, while Dean Clayton handled the front page makeover.

The Alpha Flight Event Month gave UXN’s front page a red-hued makeover, with our headings changed to red, and a huge maple leaf design sprawled over one side of the front page. A new Alpha Flight logo was also displayed during this time. 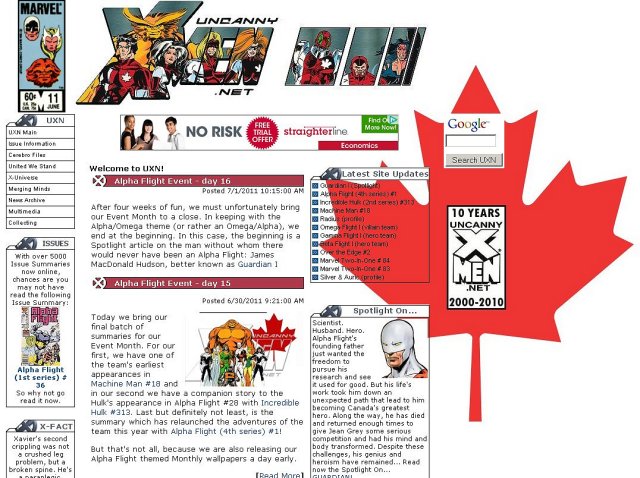 Below is a list of all articles that were released during the Alpha Flight Event Month:

One of our relatively newer sections at UXN, the Hero Teams section, was bolstered by several new additions - entries for the early Department H training teams Beta Flight I and Gamma Flight I, as well as the heroic Omega Flight III. Of course, the Alpha Flight Event Month would not have been complete without an entry for the Alpha Flight team itself, one of the site’s biggest articles.

Not wanting to leave this section without any new entries, Villain Team articles were written for the villainous Omega Flight I and Omega Flight II teams.

Another of our newer and very popular sections at UXN, several Alpha Flight-related characters were given entries - Auric, Flashback, Major Mapleleaf II, Radius and Silver, each from a different era of Alpha Flight’s history.

As we strive to add more characters to our most popular section at UXN, there were three Alpha Flight characters well overdue for an entry here - Guardian, Vindicator and Madison Jeffries. Once Madison Jeffries was released, there was some debate by our fans as to who the lucky Alphan would be. Ultimately we chose Guardian and ended our celebration with the release of his Spotlight.

Other articles Two other features rounded out the Event Month - an “X Marks the Spot” entry on Alpha Flight’s former headquarters, Tamarind Island, and a Staff Directory on everyone that has worked at Department H, which will eventually be incorporated into a larger Department H article. Monthly wallpaper was also released featuring three different Alpha Flight images.

Issue Summaries What Event Month would be complete without a host of issue summaries? But with all of the Alpha Flight series issues summarised long ago, I really had to dig deep to locate some rare and obscure Alpha Flight guest appearances. The “point one” issue and the first issue of Alpha Flight’s new series were also released.
Alpha Flight #0.1
Alpha Flight (4th series) #1
Chaos War #5
Incredible Hulk #313
Machine Man (1st series) #18
Marvel Team-Up Annual #7
Marvel Two-in-One #83 & 84
Over the Edge #2
Power Pack (1st series) #9 & 10
What If...? (2nd series) #59