SUMMER LOVING (the love interests of the Summers clan): Page 4 of 9 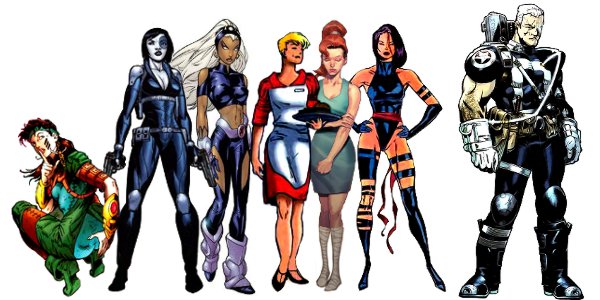 Growing up in the Askani future timeline, Nathan was informed by his mentor Cable that he would have to search out the last of the Sisterhood to receive training. Reaching their location in Ebonshire, he came across a pirate ship attacked by insectoid monsters. Nathan joined the battle, but was also about to be beaten when Aliya stepped in. Nathan was instantly struck by her beauty and Aliya, a novitiate of the Sisterhood, brought him to the city, where Nathan was recognized as the long expected messiah Askani'son. To his surprise, the teacher that Nathan should meet was not Clan leader Sanctity but Aliya. [Askani'son #3-4]

Not much is known about the next 15-20 years, during which Nathan and Aliya founded Clan Rebellion and married with the single word “forever" being their wedding vow. Also unknown are the circumstances that led to Aliya having a son named Tyler, who was adopted by Nathan. In one of their many battles against Stryfe and his forces, Aliya was hit by a grenade explosion and died in Nathan’s arms.
First meeting and attraction: Askani'son #3
Aliya’s death: Cable (1st series) #1

Cable and Domino’s history goes way back to over ten years in the past, when they were both part of the mercenary group Wild Pack, later known as Six Pack. Though there was always some basic attraction, Cable did not allow himself to become emotionally attached to his team, as he was only in the present to change the future. Still, over the years, he and Domino developed a deep friendship that was put to the test when Cable sacrificed his team to hunt down Stryfe. [X-Force (1st series) #8, Cable: Blood & Metal #1-2]

Years later, when Cable asked Domino to help him lead X-Force, he was unaware that it was actually the shapeshifting Copycat posing as Domino, who was captive of Mr. Tolliver. Once the truth was out, Cable rescued her. [X-Force (1st series) #15] Somewhat later, Domino really joined X-Force and the old friends decided to add a romantic angle to their relationship. Both were very nervous when they dressed for the evening but, when a crisis arose, they spent the better part of their date in the Morlock Alley, performing the beautiful Ceremony of Light. [Cable (1st series) #15]

When the X-teams witnessed a crystal wave approaching Earth and believed that the universe would end, they concluded that they had an hour for last things. Domino and Nathan finally admitted their feelings to each other and shared a deep kiss. Luckily for them and everyone else, the universe was not destroyed. From then on, Domino was often in Nathan’s company, though their relationship did seem at a standstill. All of a sudden, Aliya appeared in the present, asking for help in the rebellion. Cable and Domino traveled with her to the future and, after helping to cure Cable’s younger counterpart, left again, knowing that a few years ahead Aliya would die. [Cable (1st series) #25]

Understandably, the experience shocked Cable, who suffered another person tragedy when his misguided son Tyler was killed by Wolverine. Domino offered comfort and help, but Cable gained another love interest in Storm.

Before the situation was properly resolved, Zero Tolerance captured some of X-Force, including Domino. She received a skull implant that screwed up her powers. Domino departed, explaining that she would need time to find a new balance, powerwise and emotionally. Cable too became a solo operative. Since then, their paths have crossed more than once and they are back to their deep friendship.
First meeting and attraction: unrevealed (over 10 years in the past)
First date: Cable (1st series) #15
First kiss: Cable (1st series) #20
End of relationship: X-Force #70

While X-Force was residing at the mansion, Storm and Cable got to know each other better. Since she blamed herself for the Morlocks' demise, Ororo wanted to know how to do their Ceremony of Light. However, when she later performed the ritual, she was abducted to the alternate dimension The Hill, and the X-Men believed her dead. In mourning, Nathan learned more about Storm from Scott and Jean. Refusing to believe her death, he was investigating the tunnels just when she returned. [Storm (1st series) #1-4] During the Onslaught incident, Storm helped Cable against the Hulk and saved his life by jumpstarting his heart with a lightning bolt after he was mortally injured. [Cable (1st series) #34] With his techno-organic virus flaring out of control, Nathan’s closest friends (Domino, Cannonball and Storm) watched over him. Fighting his inner demons, the deaths of Aliya and Tyler, Cable had a little outside help from Franklin Richards and the virus went into remission. Upon awaking, Cable realized that, after these long years, his heart was finally ready again for a new love. [Cable (1st series) #36] Nathan and Ororo spent some more time, for example preventing a terrorist bombing of a good will concert. [Cable (1st series) #42] However, before things got serious, Cable and X-Force parted ways and left the mansion.

Though months later Cable took his father Cyclops' place on the X-Men, the relationship (or lack thereof) was not brought up. After Cyclops was found alive and free of Apocalypse’s essence, Cable quit the team, questioning if the X-Men’s methods would work for him. He and Ororo parted on very friendly terms when he informed her of this decision. [Cable (1st series) #88]
First meeting: Uncanny X-Men (1st series) #270
First attraction: Storm (1st series) #4

While hanging out in the diner “Babel’s," Cable got to know Stacey Kramer, who works there as a waitress. He soon confided in the refreshingly normal woman, who had nothing to do with superhero life, and also he got along well with her brother Kenny, who was born with Down syndrome. After disappearing without explanation for weeks, Cable explained that he was a mutant and Stacey took the news rather well. Shortly afterwards, she asked him to cure Kenny with his powers, but at the time Cable was without telepathy (because of the Psi-War), not that it would have worked anyway. [Cable (1st series) #63-64] Even when she learned that he was from the future trying to change history, and when she was taken hostage by a villain, she still stood by Cable and proclaimed her love. [Cable (1st series) #68-70] When Cable was kidnapped by Apocalypse for The Twelve and Nathan was again missing, Stacey realized that it was like being together with a cop or a firefighter. She would never know if a goodbye would be the last, as he could fall in the line of duty every day. Still, when he returned, Stacey wanted to work it over with Cable, only he felt he wasn’t up to it. With his father Cyclops apparently gone and his entire mission in question, Cable had too much to think about, so he ended their relationship and telepathically erased any knowledge that Stacey had of him.
First meeting: Cable (1st series) #55
Confides in her that he is a mutant: Cable (1st series) #63
First kiss: Cable (1st series) #70
Goodbye: Cable (1st series) #78

After working with Cable’s X-Force for a time, trying to take down the criminal Volga, Psylocke developed an attraction to the man. Realizing they both needed a stress release, she proposed a no strings relationship, which Cable initially rebuffed. Later, he took her up on the offer. At the time, Cable was currently cloning his body every day, to prevent his death via a virus that would kill him within 24 hours. To Betsy, this enhanced the “no strings” aspect of their relationship, as Cable was killed each day and the slate was wiped clean. Their dalliances lasted a few weeks but things ended when the level of Cable’s lies to the team were revealed and he was kicked out of X-Force. As it was only a casual relationship, it seemed to have little impact on Betsy [X-Force (4th series) #7-15]
First attraction: X-Force (4th series) #7
First had sex: X-Force (4th series) between #7-10
End to casual relationship: X-Force (4th series) between #15