SUMMER LOVING (the love interests of the Summers clan): Page 7 of 9 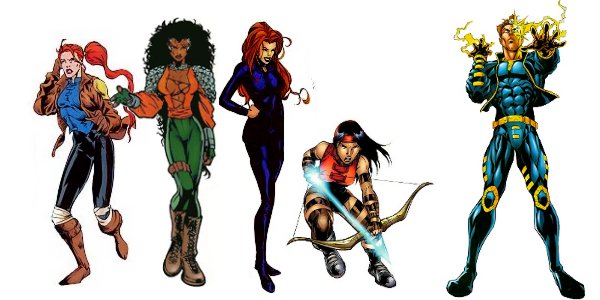 In the alternate reality known as Age of Apocalypse, Nate was created in a lab, his ultimate purpose was to defeat Apocalypse. Shortly after escaping from the lab, he joined Forge’s ragtag group of mutants and, when they interfered in a culling of the population, they met Theresa Rourke manifesting her powers. Nate immediately trusted her and took her into the group. Theresa help him uncover the truth about himself and, when they encountered Sinister, Sonique, Nate and Sauron were the only ones who survived the encounter. Before Nate went to confront Apocalypse, something he had to do alone, Theresa kissed him deeply before saying goodbye. [X-Man #1-4] While battling Holocaust, Nate was transported to the main Marvel Universe.
First meeting: X-Man #1
Goodbye: X-Man #4

While in the service of Mr. Sinister, it was Thenody’s duty to watch unknown mutant data. By doing so, she learned of Nate Grey’s existence and felt that she could trust him. When she finally ran away from Sinister, with the Marauders hot on her trail, Nate helped her to defeat them, as Sinister was his enemy too. Threnody asked to accompany Nate and they soon started to care for each other. Nate even tried to remove her implants that were regulating the energy flow within her, though with no success. [X-Man #15] For the whole time, there was a suspicion that perhaps she was being used by Sinister to get to Nate, and even Threnody herself did not really know. [X-Man #23] Still, Threnody showed Nate how to dance and helped him to get along in New York City. They even moved into an abandoned penthouse and enjoyed themselves. Visiting her mother’s grave, Threnody was approached by Madelyne Pryor, demanding to know Nate’s whereabouts. She became very angry when the death-energy sensing Threnody told her that she was not really back alive, and Madelyne killed her in an outburst. [X-Man #25]

However, feeding on her own death energy, Threnody woke up in the morgue with her powers slightly changed. [X-Man #29] In her wake, she animated corpses who kept following her, chanting her name. She kept stalking Nate and secretly hid in the apartment, waiting for him. However, whenever he showed up, he was accompanied by Madelyne, her murderer. Aside from her other problems, Threnody was also pregnant and, shortly after Madelyne left, Threnody gave birth and was overwhelmed by dead corpses. Nate came to her rescue but, wherever they went, the dead followed. Threnody saw that she was only endangering Nate, so she decided to leave. When he did not want to let her go, Threnody pretended that she never loved him; she was only feeding off him as Nate’s powers were slowly burning out and killing him. However, behind Nate’s back, she had tears in her eyes, showing her true feelings. After she left, Nate dumped the many corpses in the ocean. In a secret hideout, Threnody picked up her child, of whom Nate had no knowledge.
First meeting: X-Man #13
First attraction: X-Man #15
First kiss: X-Man #21
Threnody killed: X-Man #25
Threnody pregnant: X-Man #52
Break-up: X-Man #58

When Nate Grey crossed over from the Age of Apocalypse, he mentally reached out to a helping hand (Jean from his world) and accidentally provided Madelyne Pryor’s psionic ghost with a new body. She met Nate in the Swiss Alps, almost completely amnesiac, only remembering only her hatred for Sinister. She was soon lured away from Nate by Selene, who introduced her to the Hellfire Club. [X-Man #7, 22] When Tessa accidentally restored her memory, she washed off Selene’s manipulations and searched for X-Man but met Threnody instead. Angered to hear from the death-energy feeding mutant that she was still dead, even though she was walking around and breathing, Madelyne killed Threnody. She then found Nate where she had first met him in the Swiss Alps, only to find that he was with Jean. In the battle that followed, Nate chose Jean over her. X-Man and Jean then discovered that Madelyne was a psionic ghost, subconsciously given form by Nate. He tried end the argument by re-absorbing her, only to find that he couldn’t, as she was now independent. Madelyne escaped back to Sebastian Shaw and shared an intimate night with him. [X-Man #25]

A few months later, Madelyne showed up at X-Man’s side again, now also being able to teleport. She aided him in battle against the Great Beasts, showing that she would be there for him, even against his will. At first, he was not fond of her company but, when the Psi-War, a battle between Psylocke and the Shadow King, caused a temporary worldwide blackout of psionic abilities, he welcomed her assistance. Their relationship developed, having aspects of friendship, love and family connection in equal parts.

When Nate was attacked by Strikesquad: Gauntlet, a group of operatives wearing psishielded armor, Madelyne was buried alive by one of them. Though she managed to escape by teleporting, the battle had taken a lot out of X-Man and Madelyne looked drained and withered. In no shape to continue whatever plans she had with Nate, she left.
First meeting: X-Man #5
First kiss: X-Man #25
Madelyne returns to Nate: X-Man #38
Departure: X-Man #52

Nate first met Dani Moonstar when her New Mutants squad rescued him from the clutches of Sugar Man. He afterward joined Dani’s squad, while working to deal with his reduced powers. During a team trip in Madripoor, Nate stuck to himself, unsure how to act in a social situation. Dani reached out to him and the two finally expressed their feelings for each other with an intimate kiss. [New Mutants (3rd series) #26, 41] When Cyclops became corrupted by the Phoenix Force, his leadership came to a disastrous end and Dani’s team went their separate ways. Despite this, when Moonstar joined the superhero team the Defenders, Nate remained close to her and the pair finally confirmed their relationship status.
First meeting: New Mutants (3rd series) #28
First kiss: New Mutants (3rd series) #41
Confirmed they are dating: Fearless Defenders #9