SUMMER LOVING (the love interests of the Summers clan): Page 2 of 9 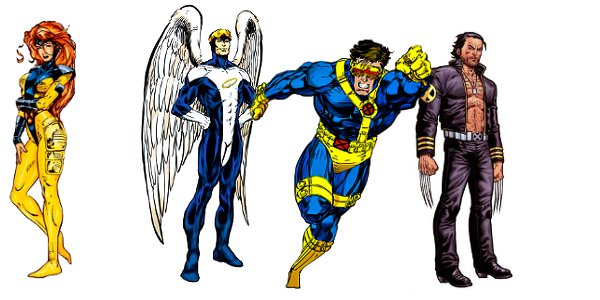 When Jean Grey joined the X-Men, all the males were attracted to her; especially the Angel, aka Warren Worthington, who started to show some personal interest in Jean. Acting very self-confident, he beat the other X-Men when it came to driving Jean to the train station, or spending an afternoon with her. Jean did like him as a friend, but secretly loved Scott and tried to invite him along. [X-Men (1st series) #3, 14] The love triangle climaxed when Cyclops accidentally injured the Angel during a battle and Warren accused him of having it done on purpose to have Jean for himself. The next day, though, Warren apologized that he was delirious and soon afterwards gave up on Jean, realizing that she cared for Scott more than for him.

Years later, the romance briefly came up again when Jean was found miraculously alive in a healing cocoon at the bottom of Jamaica Bay. At first, Cyclops kept the existence of his wife secret from Jean and Warren was quite angry with him. As she started to realize that something was wrong, Warren offered a shoulder to cry on, thus endangering his relationship with Candy Southern. [X-Factor (1st series) #6-7, 10]
First meeting and attraction: X-Men (1st series) #1
Warren accuses Scott of jealousy: X-Men (1st series) #26
Warren gives up on Jean: X-Men (1st series) #31

When the new generation of X-Men were recruited to rescue the original team from the mutant island Krakoa, Wolverine instantly fell for Jean. In their first night at the mansion, Jean couldn't deny a certain attraction to the feral X-Man but since she soon quit the team to pursue other interests there was little more interaction between the two. Like anybody else, Logan believed Jean dead after Phoenix had sacrificed herself on the moon and, years later, feared that he was going insane when he recognized her scent in the Morlock tunnels and at Sara Grey’s house. [Uncanny X-Men (1st series) #211, 215]
When X-Factor and the X-Men finally met during Inferno, Logan kissed Jean deeply, despite Cyclops standing next to them. Wolverine reasoned that Scott already had a wife (Madelyne), so he could claim Jean, but she resolved the argument by telling that she was noone’s property. [Uncanny X-Men (1st series) #242]
When they met again during the X-Tinction Agenda,  both Logan and Jean were captured and had their mutant powers blocked. Cameron Hodge knew of the personal history between them and had Jean locked in the same prison cell as Wolverine, knowing the impact it would have on them. Inside, Jean found Logan dying from his injuries, as his healing factor was not working. They both knew that it could be their last chance to get together and again had one of their famous kisses before Jean backed away in tears. [X-Factor (1st series) #61]
History repeating itself, Jean and Logan once more found themselves in a near-death situation years later. Locked away in the subconsciousness of Warp Savant, they again kissed before they were released from that plane of existence. Afterwards, Jean claimed to not remember what happened, but obviously was trying to not upset her husband. [Uncanny X-Men (1st series) #394]
Speaking of Scott, the marriage seems to be under a strain. Feeling misunderstood and lonely, Jean turned to Logan, but surprisingly this time Logan stated that it would never really work between them. [New X-Men (1st series) #114, 117]
First meeting and attraction: X-Men Giant Size #1
First attraction: Classic X-Men #1
First kiss: Uncanny X-Men (1st series) #242
Logan tells Jean that it would not work: New X-Men (1st series) #117