SUMMER LOVING (the love interests of the Summers clan): Page 6 of 9 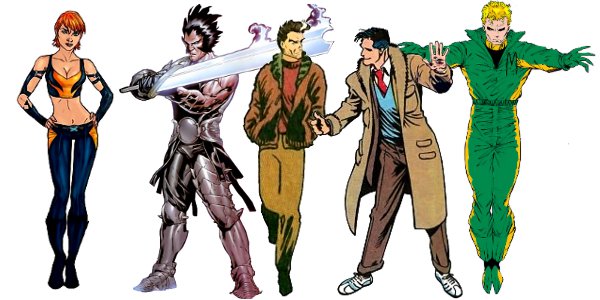 In the alternate reality Days Of Future Past, Rachel was born as the daughter of Jean and Scott. At Xavier’s school, she met Franklin Richards, the mutant son of Mr. Fantastic and the Invisible Woman, who was trained in the use of his powers. Though little of the backstory of Rachel and Franklin is known, it's likely that they already had some feelings for each other back in these early days. Much later, Rachel was captured and brainwashed into a mutant tracking hound. She served her masters for months / years, until she overcame the conditioning. She was sent to a concentration camp, where she was reunited with the remaining X-Men, including her lover Franklin. The X-Men later broke out of the camp and tried to change the past by sending Kate Pryde back in time. Unfortunately, they were discovered and Franklin was killed by a Sentinel. [Excalibur (1st series) #52, X-Men (1st series) #141]

Years after Rachel crossed over from that timeline and built herself a new life in the present, the adult Franklin Richards suddenly appeared in New York. [Fantastic Four Annual #23] He was the mental self of the Franklin that had died in Rachel’s timeline. In the instant of his death, Franklin wished himself to a time when he felt safe. However, he was subconsciously was feeding of Rachel’s energy and had to accept his death or otherwise he would have permanently injured Rachel and young Franklin.
First meeting: unrevealed
Franklin dies: X-Men (1st series) #141
Franklin accepts death: Uncanny X-Men Annual #14

Excalibur first met Alistaire when they investigated a group of Nazi doppelgangers popping up. As heads of the W.H.O. (Weird Happenings Organization), Dr. Stuart and his twin sister Alysande were called to examine. Witnessing Phoenix in battle, Alistaire was instantly fascinated by her and soon tried to get to know her better, much to the anger of Rachel’s teammate and friend Shadowcat, who had a crush on Dr. Stuart. Possibly for her sake, Rachel did not respond to Alistaire’s flirting. Later, when the team was shortly without Kitty, Rachel sensed Alistaire’s thoughts while she was flying with him. She reminded him to be careful what to think while in the proximity of a telepath and he apologized. Still, Rachel said that there was no need to, as she took his thoughts as a compliment. It went never any deeper than this.
First meeting & attraction: Excalibur (1st series) #9
Alistaire tries to date: Excalibur (1st series) #11
Rachel senses his feelings & doesn’t respond: Excalibur (1st series) #25

Shortly after Excalibur had moved to Muir Island, they were attacked by Siena Blaze. The battle between her and Phoenix caused a storm over the open sea and a survivor was washed ashore on Muir Island. It was scientist Dr. Rory Campbell, who was on his way to meet Moira MacTaggert. Rachel was instantly attracted to the mysterious man and confided in him. She kept flirting with him but, unfortunately for her, she had to trade places with Captain Britain, who was stuck in the timestream, and she was transported 2000 years into the future. While watching the exchange, Rory gazed into the timestream and saw a vision of Ahab, the mutant hunter, a future version of himself. An interesting twist on a relationship that never came to be.
First meeting and attraction: Excalibur (1st series) #73
Rachel disappears in the timestream: Excalibur (1st series) #75

As wieldier of the Blade of the Phoenix, Korvus was held prisoner by a secret order of the Shi’ar that wished to usurp the throne. He was sent to assassinate Rachel Grey and the X-Men when they came to stop Vulcan. Instead, Rachel freed Korvus from the control of his captor. The pair shared an instant connection, due to being both wielders of the Phoenix, including shared memories. While Korvus was eager to pursue these feelings into a serious relationship, Rachel was hesitant and slowed things down [Uncanny X-Men (1st series) #479 -486]. The two fought side by side for a number of months against Vulcan’s regime, until Vulcan was finally killed during a war with the Kree. Korvus accompanied Rachel to Earth but found his time on Earth intolerable and soon agreed to captain a Shi’ar salvage crew. The distance between Rachel and Korvus didn’t help their relationship and they drifted apart, ending their relationship. [X-Men Legacy (1st series) #260]
First meeting: Uncanny X-Men (1st series) #479
First attraction and kiss: Uncanny X-Men (1st series) #481
Slowed down relationship: X-Men: Emperor Vulcan #1
End of relationship: X-Men Legacy (1st series) #260