SUMMER LOVING (the love interests of the Summers clan): Page 9 of 9 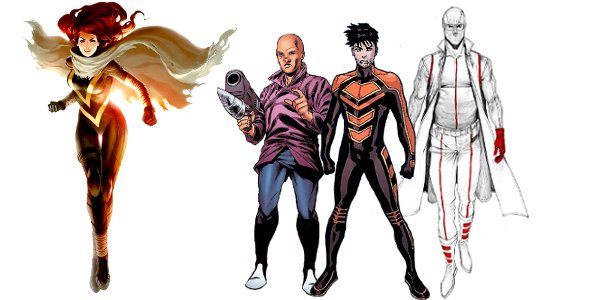 Whilst fleeing through time from Bishop, Hope was separated from her adopted father, Cable, in the future. When she reached a city populated by the decedents of Stryfe’s army, Hope met a boy named Emil, who was instantly infatuated with her. Though she was gruff and aggressive to him, Emil helped hide Hope from Bishop for two years. His infatuation for her was evident and her feelings appeared recicprocal. Eventually, Cable arrived and dragged her onto a space ship, leaving Emil behind, which made Hope furious. After years of searching, Emil tracked Hope down, with the help of Bishop, who had lied to him and convinced him he was a friend. Emil saved Hope from Bishop and took her to the ship’s escape pods, only to learn there were only two. Realizing that Hope needed Cable, Emil allowed the pair to take the pods while he remained behind and set off a nuclear bomb to destroy the ships and buy Hope some time. [Cable (2nd series) #16-20]
First meeting: Cable (2nd series) #16
First Attraction: Cable (2nd series) #16
Emil’s death: Cable (2nd series) #20

Gabriel was one of the first mutants whose mutant powers activated after M-Day. After Hope Summers helped activate his powers and saved his life, Gabriel joined Hope and the other new mutants, known as the Lights, in rescuing other new mutants. Gabriel developed a crush on Hope fairly quickly and she even kissed him for saving her life after an encounter with another Light.  Soon after, he asked her on a date. [Uncanny X-men (1st series) #527, Generation Hope #1-5] When Utopia was attacked by a super sentinel, Velocidad’s leg was injured. While recuperating in the infirmary, he flirted with Pixie and made out with her. Hope was angered when she walked in on the pair and realized she should never should have got involved with him in the first place, as it complicated their mission. Despite this, the pair and Pixie managed to continue to work together until the team disbanded [Generation Hope #12].
First meeting: Uncanny X-Men (1st series) #527
First attraction: Uncanny X-Men (1st series) #527
First kiss: Generation Hope #4
Gabriel cheats on Hope: Generation Hope #12

When Hope was rendered comotase after an attack by the arms dealer Volga, Cable kept her under medical care in his latest X-Force facility. After Cable rescued a braindead mutant named Meme from the Voga, Hope copied Meme’s power to control and interact with technology and posed as her to fight alongside the team. Trapped in her body, Hope found release in interacting with technology. As teammate Fantomex had nanites within his brain, they could connect, to pleasurable results, so she proposed that they have cybersex. Fantomex took her up on the offer and they had relations for a time, until Fantomex ends things with no explanation. Trying to understand why, Hope tried to hack the nanites in Fantomex’s brain, only to discover he had gone insane, since his body had been recently split into three entities.  Fantomex tried to purge Hope from his mind, essentially killing her, though she ultimately managed to escape. Fantomex then revealed he had been using Hope in order to steal a digital form of the Volga virus she was carrying. Together with X-Force, Hope managed to take down Fantomex, just as he went on an insane rampage.
First attraction: X-Force (4th series) #7
First have cybersex: X-Force (4th series) between #7-10
Ends things with Hope: X-Force (4th series) #11
Tries to kill Hope: X-Force (4th series) #11