SUMMER LOVING (the love interests of the Summers clan)

Love often doesn’t come easy for the Summers clan, arguably one of the cornerstones families of the X-Men Universe. In particular, the relationship between Cyclops and Jean Grey has suffered many obstacles they’ve had to face, including possession, love triangles, time travel and death. However it could have been so different. Here we will look at the various relationships that members of the Summers clan have had throughout their history. 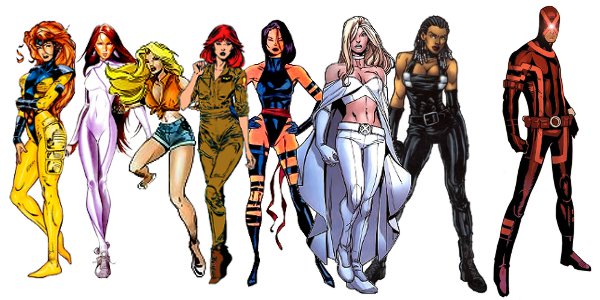 Scott first met Colleen in Japan whilst the X-Men were trying to get home from the Savage Land. Colleen's attraction was evident from the beginning, but she and her partner Misty Knight (who also happened to be Jean Grey’s roommate) believed that he was still with Jean. At the time, Scott thought that Jean had died in Magneto's underground complex [X-Men (1st series) #113] and he did not allow himself any feelings at all. Still, Colleen and Scott spent all their spare time together talking and, once they had returned to America, Colleen gave Scott a key to her apartment. However, things were cut short as Cyclops found out that Jean was still alive when the Beast returned to the mansion. [X-Men (1st series) #125] After battling Proteus in Scotland, Scott told Jean of Colleen during the flight back, but added that he only considered her a very close friend. Colleen and Scott were never seen together again, but probably he explained things to Colleen off-panel.

After the original X-Men rejoined the X-Men, Scott and Jean ended up on different strikeforces. Cyclops was the leader of the Blue team that also included Psylocke, who soon she started to heavily flirt with him. Though Scott seemed to respond, she could also have been using her telepathy to nudge him into her direction. Although nothing happened between them, it caused problems between Scott and Jean until finally Scott took a short leave of absence to sort out his conflicts. Betsy found her own distraction with the arrival of Revanche. [X-Men (2nd series) #8, 12, 17, 20] After the connection between her and the Asian assassin Kwannon was fully revealed, Betsy admitted that, though it was Revanche's influence that made her flirt so heavily, the attraction to Scott was really from her side. [X-Men (2nd series) #38].
First meeting: Uncanny X-Men (1st series) #242
First attraction: X-Men (2nd series) #8
Scott takes a short leave of absence: X-Men (2nd series) #20
Final confrontation: X-Men (2nd series) #38

After merging with Apocalypse, Cyclops’ personality was altered, leading to a rift in his marriage to Jean Grey. When Jean showed signs of the Phoenix Force returning and then took the role of headmaster, it put further strain on their relationship. Scott turned to Emma as someone in whom he could confide, which soon turned into a psychic affair. Jean interrupted one of these encounters, leading to a violent confrontation between the two women. Soon after, Jean was killed and, now as the Phoenix, she psychically nudged Scott into a romantic relationship with Emma. [New X-Men (1st series)  #114-150] The pair settled into a domestic relationship quickly, becoming co-headmasters of the school and together faced various crises such as the Decimation, the superhero civil war and the Skrull invasion. Together the pair led the X-Men to the other side of the country to San Francisco. During this time, Emma joined a secret Cabal of supervillains, led by Norman Osborn, in order to help further mutantkind. She kept this secret from Scott until Osborn attacked the X-Men, revealing herself as a double agent [Utopia crossover]. When the Phoenix Force returned to Earth and was inadvertently split into five, both Emma and Scott were possessed. Initially, they worked together to build a better future for mutantkind. However, Scott forcibly stole her portion of the Phoenix, a clear act of betrayal. After the crisis passed, their relationship ended, the pair continued to work together to help mutantkind, though their relationship was clearly over. [Avengers vs. X-Men crossover]
First meeting:  X-Men (1st series) #131
First Attraction: New X-Men Annual (1st series) 2001
Starts affair: New X-Men (1st series) #131
Commences relationship: New X-Men (1st series) #150
End of relationship: Avengers vs. X-Men #11

As a longtime enemy of the X-Men, any romance between Scott Summers and Joanna was unthinkable, until Legion warped reality into the Age of X. In this new reality, mutantkind had taken refuge in Fortress X, where they battled external human forces to maintain their freedom on a daily basis. Scott (known as the Basilisk) and Joanna were married in this reality. Her invulnerability made her one of the few people in whose presence Scott could remove his specialised mask. When Legion’s errant personality was finally defeated and reality was restored, Joanna was one of the few mutants who decided to keep all of her memories of the Age of X. She confronted Cyclops, eager to rekindle the passion they had shared. Cyclops made it clear that to her that she had earned her place with the X-Men but that he had no interest in recapturing what they had shared. He believed it to be a mere illusion but for Frenzy it was very real. This prompted a massive personality change in the woman and she joined the X-men, though her interactions with Cyclops since the event have been minimal [Age of X crossover].
First meeting:  X-Factor (1st series) #4
Married in reality warp: X-Men Legacy (1st series) #245
End of reality warp: New Mutants (3rd series) #24
Rejected by Scott: X-Men Legacy (1st series) #249