In the weeks that followed, Puck helped Heather reassemble Alpha Flight into a working team once more. [Alpha Flight (1st series) #18-20] Alerted to a magical disturbance in Ungava Bay, Alpha Flight teamed up with the X-Men as they were looking for Cyclops and his wife, Madelyne Pryor, whose plane had disappeared in the same area. Usually covered with snow and ice, the heroes found Ungava Bay transformed into a beautiful golden city and the missing people joyfully living in it. A mystical Firefountain had given Madelyne, now calling herself Anodyne, the power to heal. Demonstrating her talents on Judd, she restored him to his full height and also removed the pain that he was constantly in. However, as the X-Men and Alpha Flight soon learned, the Norse 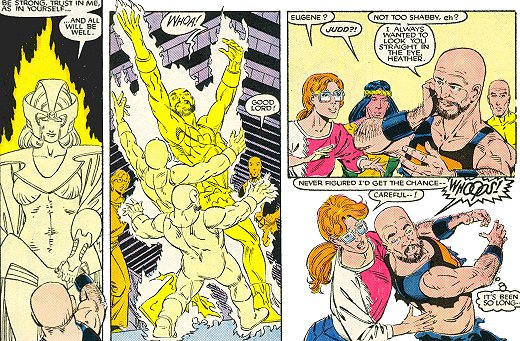 god, Loki, was behind the gifts that Madelyne and several other humans had received, and these gifts came with a price. In return, the world was purged of all magic, causing the predicament of Snowbird or Shaman. Those who had been changed for the better by Loki’s gifts, including Puck, soon had to battle the few who opposed the “gift,” though eventually all the heroes realized that the price was too high and the gift was rejected by those who had taken it. Judd became a dwarf once more, leaving him with a bitter-sweet memory of what it would be like to be able to look Heather straight in the eye. [X-Men & Alpha Flight (1st series) #1-2]

Alpha Flight had numerous conflicts to deal with, both internal and external, including battles with the Beyonder and the Incredible Hulk, the loss of Sasquatch and Shaman, and a cruel deception by Omega Flight who arranged to fool the team into thinking James Hudson had come back to life, only to have him revealed as a robot set to betray Alpha. [Alpha Flight (1st series) #23-29]

Judd's feelings for Heather Hudson had not wavered during this time, and in fact had grown stronger. He also began feeling overprotective of her in the field, since she was ill-content to lead Alpha  Flight from the sidelines. Going through her late husband’s notes, Heather learned of a 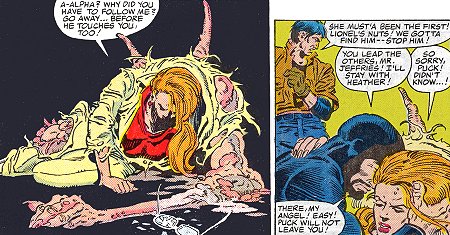 potential recruit for Alpha Flight, who was held in a mental asylum. When she visited this man to check if his condition had improved, the deranged man used his flesh-altering powers on Heather, transforming her into hideous creature. Alpha Flight was called in to deal with the situation and, while the others battled Scramble, the Mixed-Up Man, Puck comforted Heather and told her that, even looking like this, he loved her. [Alpha Flight (1st series) #30]

Next, Alpha Flight had to deal with Deadly Earnest, who could kill other with the merest touch. One by one, the team were struck down by the villain, with only Puck remaining as he kept leaping to safety whenever Earnest reached for him. To cover his escape, he took Heather hostage, whereas Puck found an ally in the mysterious Nemesis. Claiming that Alpha Flight were not dead yet, she tended to his fallen teammates after handing Judd her energy absorbing blade. He understood correctly what she implied – the life-forces of his teammates were still inside Deadly Earnest, but he could get them back by striking the villain with the sword. Even though he

knew that it meant breaking the promise he had given James McDonald Hudson to never kill again, he felt that he had no other choice, especially as the villain was about to kill Heather as well. Puck severed Deadly Earnest’s head and hands, before carrying the blade back to Nemesis, who then released the re-absorbed energies to restore the other Alphans back to life. [Alpha Flight (1st series) #31]

Puck hoped that the recent incidents would cause Heather to become more cautious, but they had the opposite effect. She had a version of Guardian‘s battle-suit recreated for her to use, playing hero in the very suit that killed her husband. Judd did not approve of this and, when she asked him to train her in combat, he turned her down. It was a combination of his conflicting emotions over Heather and the guilt he felt over the broken promise to James Hudson that left Judd too weak of spirit to fight off his mystical prisoner any longer. He collapsed and the Raazer escaped from his body to threaten Alpha Flight, returning Puck to his full size and true age in the process. Judd no longer could hide his true age from his teammates, and he gave them the full story of his origin. As Alpha Flight battled the sorcerer, Puck was forced to offer up his body once again as a vessel for the demon, and returned to his dwarfish appearance. [Alpha Flight (1st series) #32]

In time, Heather trained herself and took on a fully active role in Alpha Flight as Vindicator II, and the new status quo soured Puck to the whole super-hero business. Whereas previously he was a devil-may-care rogue, relishing in the thrill of action and laughing off any jokes about his size, 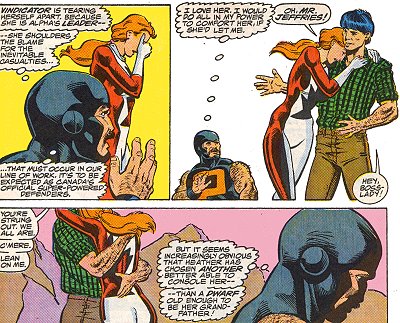 Judd was now almost apathetic to his work with Alpha and over-sensitive to any remark or situation which he believed lessened him in Heather's eyes: his inability to swim during an Atlantis mission, constant references to him being the weakest Alphan and any instance where he was injured or failed to complete a task stuck in his crawl. Though he did not lash out at others, Eugene began to wallow in pity, and his self-esteem dropped even lower after Heather finally chose to move on after Guardian's death, but with their teammate Madison Jeffries instead of with him. [Alpha Flight (1st series) #33-46]

When Northstar was struck by a mysterious illness and Aurora’s mental problems continued to deteriorate, Alpha Flight remembered the mystical Firefountain at Ungava Bay. They hoped that some of the magic was still there and, indeed, at the bottom of the pit where the fountain originated from, they found a doorway. Once again, Alpha Flight fell prey to one of Loki’s tricks, for the gate brought them to Svartalfheim, a realm inhabited by Dark Elves. While they too had a magical fountain, it was composed of dark energy.

During a battle with the Dark Elves, Puck was knocked back into the miles-deep pit of the fountain. As he fell, the dark fountain released the spirit of Raazer, once again restoring his height and age. Not knowing whether Puck had survived the fall or not, Alpha Flight were forced to retreat as they couldn’t face both the Raazer and the Dark Elves. Back on Earth, they fused the gateway shut, apparently trapping Puck on the other side forever, much to Loki’s pleasure. 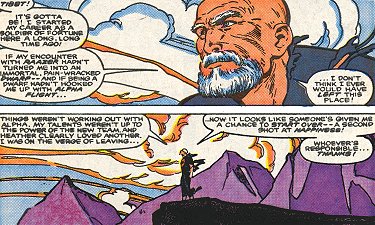 However, when forced to explain his malevolent actions to a group of elder gods whom he was trying to gain favor with, Loki thought fast and teleported Puck to safety in Tibet, claiming it had been his plan all along to engineer this encounter for the “benefit“ of Alpha Flight. Judd did appreciate this series of events, for he had come to accept his relative uselessness to Alpha Flight and to Heather - having Raazer cleansed from his system and returning to Tibet seemed like a chance at a new life for him. [Alpha Flight (1st series) #50]

While there, he learned of a lamasery in a remote Chinese borderland said to contain the doorway between worlds. Judd thought it was a good idea to ply his adventurous trade in another dimension, to truly leave his past behind and start over fresh somewhere entirely else. His entry to the lamasery was disrupted by Communist soldiers, but he managed to make his way inside thanks to a few well placed plastique explosives and his own knowledge of meditative trances to get past the monks' own mystical security measures. Confronting the high lama, Judd was surprised when the holy man opened up a dimensional portal and showed him Alpha Flight -  his former team had transported themselves to the realm of Liveworld, ruled by the evil Dream

Queen, and the high lama's portal accidentally gave the Dream Queen a means to escape her world and invade Earth. Puck and Alpha Flight were overcome by a seemingly never-ending horde of Dream Warriors, until Judd entered a yogic trance at the suggestion of the lama and realized the warriors were nothing but insubstantial phantoms. Now able to move right through the attackers as if they weren't there, Puck physically pulled the Dream Queen back into her own dimension before the dimensional portal was closed again, trapping the two of them in Liveworld. [Alpha Flight (1st series) #59-60]

The Dream Queen held Judd captive for months in her castle: she used the power of her dream world to make him young again, and raped and tortured him for periods of time, then used dream-matter from the environment to repair the damage done to his body, and then began the cycle all over again. [Alpha Flight (1st series) #67] Eventually, she would invade Earth a second time, but was defeated once more and ended up trapped in some other reality. 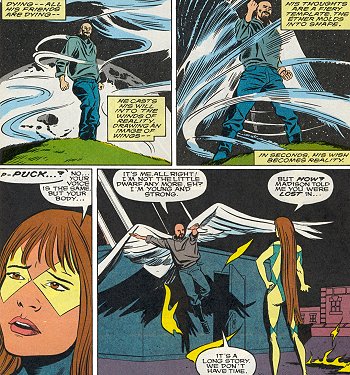 Judd found himself alone in Liveworld and, being the only active consciousness in that dimension, he discovered he could now manipulate the reality around him to suit his whims. Puck wandered Liveworld for months, looking for a way home, until his path again crossed with Alpha Flight's. They had been led to Liveworld by their enemy, Llan the Sorcerer, who used his tremendous will to reshape a portion of the dimension into a mad replica of New York City, fooling them into believing they were in the actual USA. Puck's arrival on the scene clued them in on the situation, and Talisman managed to harness their desires and return the team home to Canada, with Judd in tow. [Alpha Flight (1st series) #75]