Once back to Earth, however, Eugene collapsed in pain. The dream-matter he had used to restore his body after the Dream Queen's torture sessions had dissolved into nothingness outside of Liveworld, leaving him critically injured and forcing Puck to spend an extended time in the local hospital. While there, he was found and kidnapped by  agents of the Master. [Alpha Flight (1st series) #76, 78, 81-82] 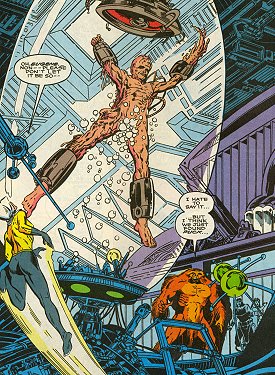 In his hidden base in the Black Hills of South Dakota, the Master began experimenting on Judd with a bio-restructuring enzyme he had liberated from Scramble, transforming Puck into one of his Remnant Men, grotesque and deformed in appearance. An Alpha Flight squad managed to track him down and infiltrate the Black Hills base, and Sasquatch managed to uncover a means of reprogramming the bio-enzyme in Puck's body to restore him to normal, albeit back into his dwarf state since that was the physical parameter the Master had in his systems for Judd. The process was a success and Puck and Alpha Flight escaped the Master's base. Judd now possessed superhuman powers, his full-sized normal mass having been compressed into his dwarf state, instead of being mystically removed as it had been with Raazer. As a result, he now had a body density equivalent to condensed rubber - like a hockey puck. [Alpha Flight (1st series) #87-90]

Puck‘s return coincided with that of James MacDonald Hudson as well, miraculously returned to the team after his supposed death years ago. Other veteran members also rejoining, Department H was reorganized as a support structure for the group. For a while, they tried out different combinations of members in various field missions until picking the new official roster of Alpha Flight. Puck was among it. [Alpha Flight (1st series) #95]

Tragically, Hudson's return to life was a short one and he once again apparently died in the course of a heroic battle involving none other than Galactus himself. Judd once again offered his support to Heather, and he took on Mac's responsibilities to Department H as chief administrator, overseeing the paperwork and report filing for the team, as well as serving as official spokesperson to the press. Puck was bored to tears in this assignment, though, and hated it

taking him away from active duty. Eventually, he passed the job off to a newer recruit named Windshear, who had some experience with corporate life. Instead, Puck accepted the role of a troubleshooter - an independently operating agent working on a variety of missions separate from the main Flight team of "Core Alpha" but helping out when needed. [Alpha Flight (1st series) #101-104]

When Box and Diamond Lil decided to get married, the male members of Alpha Flight chose the tavern that Judd had worked before joining Alpha Flight for the bachelor party. When the tavern’s 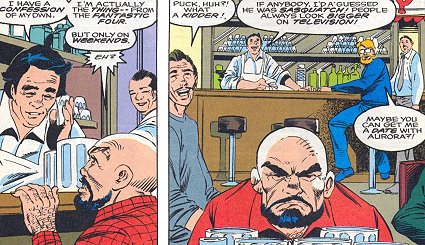 owner,  Corky, asked him where he had been all the time since running out on them, Judd revealed that he was actually Puck of Alpha Flight. Corky didn’t believe him, though, and made fun of Judd. Later that night, though, Corky got to see the heroes in action when they thwarted a robbery. Now believing Puck’s story, he further annoyed his former employee when he tried to use him as a means to get to know the other heroes. [Alpha Flight (1st series) #105]

Despite his status as a solo operative, Puck still kept an eye on his extended teammates, especially Weapon Omega, the formerly maniacal "Wild Child" who had recently been brought back on-scene and pronounced fit for duty. Judd came to notice Omega was slipping, regressing in stages back to his more feral origins. He ran a background check on Kyle through the Department H computers, uncovering the fact that Wild Child's unstable psychiatric diagnoses had been buried on his admission into Department H years previously. Kyle conquered his demons, and found a balance between his two sides as Wildheart, but Puck continued to feel a lingering distaste for the Department's actions, and the whole super-hero game. [Alpha Flight (1st series) #114-117] 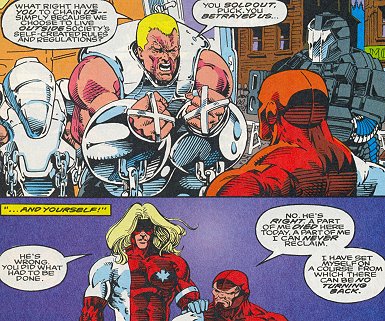 Toronto, a crisis intervention act that soon turned into turned into an exercise in  posturing and bravado when the rest of the Wrecking Crew arrived, causing massive amounts of property damage for no discernable reason. He held it together when he saw Robert Hagon and the Hardliners taking his personal doubts and turning them into carte blanche to hunt down and kill or incarcerate all paranormals in Canada, and resigned himself to the notion that, whatever its faults, Alpha Flight was by far the better of two potential evils. [Alpha Flight (1st series) #118-120]

Puck's doubts would run the other way when, after Hagon's super-powers registration act was passed in Parliament, he was forced to bring in Cleft and his other former comrades from the Outcasts. This betrayal, even done in the line of duty upholding the law, left him noticeably shaken afterwards. [Alpha Flight (1st series) #122-123] 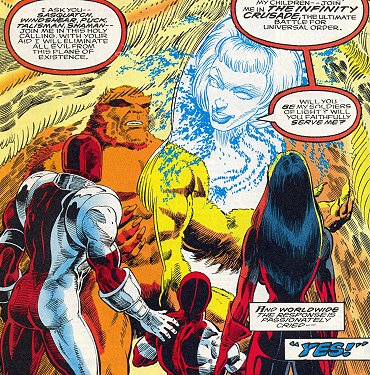 His doubts left Puck open for the psychic attack of a newly-born Goddess, set out to reorder the universe in her spiritual order. Providing a good cause to believe in, she asked superheroes all over the world join her in the Infinity Crusade. Judd and a few other Alphans accepted the Goddess’ invitation to her paradise. After several days in her service, though, the remaining heroes launched an attack on the Goddess and Shaman was able to free his teammates from her influence. [Alpha Flight (1st series) #122, 127]

Following the Goddess’ defeat, anti-mutant / superhero hysteria was further rising in Canada and, once that Hagon's financial backer, Joshua Lord, was revealed to be the self-styled Master of the World, Canada issued a temporary clampdown on all superhuman activities in their boundaries. The registration act was rescinded, but Alpha Flight and Department H were also disbanded as well. [Alpha Flight (1st series) #130] 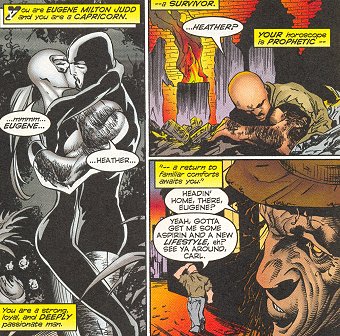 It was just the team’s official status as a group that was affected, though, and Puck and some of the other Alphans continued to hang around what was left of H in a purely advisory capacity for superhuman cases, but they all soon left as well and returned to civilian life. Judd had a tough time of it, having rented an apartment in Ottawa and routinely going on benders where he drank himself into a stupor at night, sleeping it off in alleyways with the homeless... so often that he got to be on a first-name basis with them.

One day, he received an anonymous phone call informing him that James Hudson had been kidnapped for sinister purposes, and he took the opportunity to look up Heather and find out what this was about. As they were discussing things at lunch, the pair were assaulted by Epsilon Flight, soldiers of the new Department H, who rendered them unconscious and carried them back to the reorganized Department. There, they awoke to find Guardian alive and well, only having been miraculously reduced to nineteen years old. As Puck and Vindicator, they were pressed back into service with Alpha Flight somewhat reluctantly, and forced to go on a mission against the terrorists Zodiac before they were ready, with untrained rookies and uncoordinated veterans. After their old teammate Madison Jeffries was knocked out and abducted by their opponents, Puck and Vindicator decided Department H's new set-up was too unstable for them, and they left to find Jeffries on their own.

They barely got out the front door before Epsilons stunned them and pulled them back inside. The current Department H was far more insidious than previous incarnations, employing behavior modification and memory regression to keep control of their operatives. The next thing they knew, Judd and Heather were back in Department H, willing to stay at least for the short term, and had completely forgotten Jeffries had even been there when the team reformed. [Alpha Flight (2nd series) #1-2] 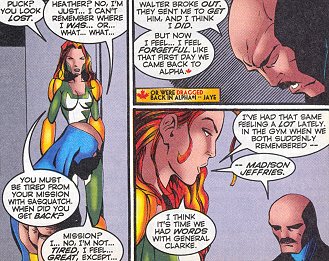 Alpha Flight continued to function, but Puck was more than aware that the team wasn't being told half of everything that was going on around them. His mysterious informant continued dropping clues for Judd to find, directing him towards Hull House in Orloo for Department H's "Legacy" project. In fact, two of Puck‘s new teammates, the Corbo brothers Radius and Flex, were former residents of the orphanage and they happened to be the same two boys that Eugene had been watching over when he was working at the place. However, with more than ten years having passed, they didn’t recognize each other anymore. Anything Judd did manage to uncover was quickly explained away by General Clarke, or wiped from his memory altogether like when he discovered that the "Sasquatch" among the team was not Walter Langkowski regressed to a feral state as they had been told, but a wild creature that only partially resembled him. [Alpha Flight (2nd series) #3-7]

Department H even temporarily convinced Alpha Flight that Wolverine had killed Madison Jeffries, and sent them into combat with the X-Men to try and retrieve him. This turned out to be a mistake on their part, though – by sending Puck and the others outside of their range of influence, into contact with people who had known them well in the past, Clarke lost the total control Department H had been trying to maintain over their agents. Alpha Flight learned not only that Wolverine couldn't have killed Jeffries, but that he'd lost his adamantium and so the "metal detector" they had been using to track him down had to be a sham, too. Filled with suspicions and questions, they returned to confront their "benefactors," only to be tricked into journeying down the Prometheus Pit into the Microverse, and then returning just in time to deal with a Zodiac raid on the Department. General Clarke was killed during this battle, leaving many of their questions unanswered. [Alpha Flight (2nd series) #9-12]

Soon after, Alpha Flight was called to respond to strange happenings at White Cross, Newfoundland, where they found themselves pulled into  battle with Puck's old nemesis, the 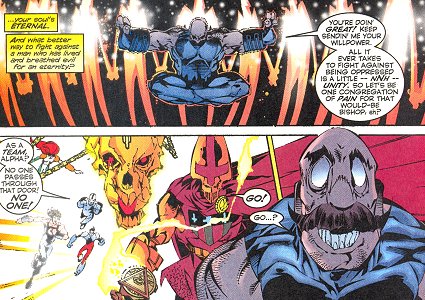 Brass Bishop. The Bishop had restored his power base in the years since his defeat at Judd's hands, and had almost succeeded in reconstructing his Tower of Babel. Using his pet demon's skull, the Bishop stole Puck's soul, turning him into a zombie that was compelled to seek out the lost Solomon Seal for him. The Bishop planned to force Puck through the open Gates of Heaven before him, but Judd used his mental discipline training to gather willpower from the other displaced souls the Bishop had taken over, enabling him to make his body resist the villain's commands long enough to grab the Seal and open the Brass Bishop's armor, leaving Mephisto free to finally claim the soul of his minion. [Alpha Flight (2nd series) #15-16]