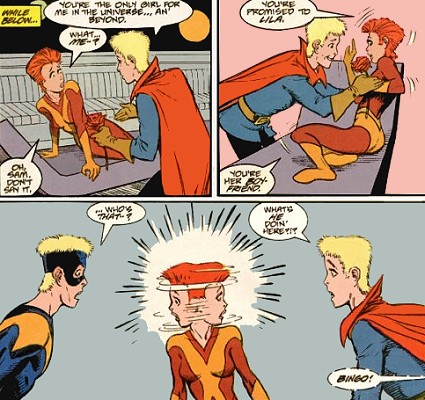 Over the next weeks, the New Mutants often found themselves grounded by Magneto but they still had one adventure after the other. When Lila Cheney was abducted by an alien slavemaster named Spyder, of course, the New Mutants followed hot on their heels, led to Spyder by his catspaw, the seductive Gosamyr, who obeyed Spyder since he kept her family hostage.

During the journey into space, Gosamyr slowly manipulated the New Mutants against each other. She made Mirage use her power to grant someone’s greatest desire on Wolfsbane, resulting in a duplicate of Sam in love with her. After all this time, Rahne still had a crush on him, kind of reawakened by Doug Ramsey’s untimely end. [New Mutants (1st series) #68]

Returning to Earth, the team was tricked by Limbo demons into kicking lose Inferno, Magik being used to create a dimensional portal through which the demons could invade Earth. Traveling to Limbo to correct things, the New Mutants also happened upon Illyana’s younger self, the six-year old that ended up trapped in Limbo and spent her entire childhood there. Seeing the frightened girl, Rahne finally took pity on Illyana and felt guilty for all the mischief she had given her. When Magik sacrificed her magical powers and reverted back to that little girl, Rahne was all the more happy for her, feeling that she finally could experience the happy childhood that both of them had been denied. [New Mutants (1st series) #73]

Following Inferno, the remaining New Mutants decided to no longer follow Magneto, disagreeing with his methods and, instead, joined with the X-Terminators, 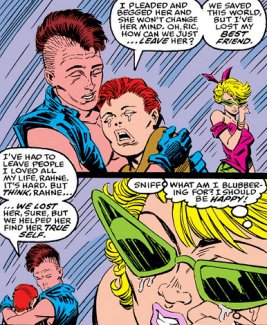 the young mutants in X-Factor’s charge. Eventually they all found themselves summoned to Asgard once more, due to the Valkyries, including Mirage, being transformed by Hela into demonic creatures in an attempt to take over the place. Fighting her, Rahne was reunited with her beloved wolf prince and the Mutants made several other friends in the Norse realm until they eventually defeated Hela.

However, leaving Hrimhari a second time didn’t bother Rahne at all, as she was more upset about her best friend, Dani, deciding to stay behind as well in order to help restoring the Valkyries’ name. Desperate, Rahne turned to her new teammate, Rictor, for some comfort, much to the chagrin of Boom-Boom, another new member. [New Mutants (1st series) #80, 82-87]

Back on Earth, Rahne’s guardian, Moira (who at that point was under the influence of the Shadow King), was not happy about her ward now being out of a school environment and decided to take her back to Muir Island. That never happened, though, as at this point the mysterious man named Cable became the New Mutants’ new mentor and convinced Moira, who had a past with Cable, to let Rahne stay. [New Mutants (1st series) #88-89] 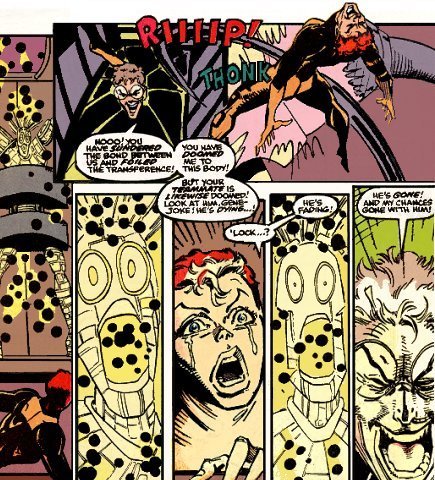 Although that allowed Rahne and Rictor to deepen their blossoming relationship, that decision may not have been for the best. Shortly afterwards, the X-teams came under the attack of the Genoshan government in retaliation for an earlier fight with the X-Men. Several New Mutants, Rahne among them, as well as Storm, were abducted to Genosha. While Cameron Hodge, who worked with the Genoshans, used their teammate, Warlock, for an experiment to transfer the alien’s shapeshifting power to himself, the mutants made a break for it. To increase their chances of at least someone to get out of the base, the mutants split up. As they parted ways, Rahne had to assure her boyfriend Rictor that she’d head for safety, before kissing him deeply.

Once he was out of sight, Rahne went back in a bid to save Warlock. The attempt was only partially successful, as she only managed to prevent Hodge from gaining Warlock’s power, though the young alien seemingly perished before Rahne’s eyes.

Hodge retaliated by having Rahne undergo the Mutate bonding process, turning her into a brainwashed slave of the Genoshan government. During the transformation into a mutate, Rahne was also emotionally bound to one of the Magistrates. In her case, she was bonded to Havok, who had been brainwashed into serving Genosha, though neither he or Rahne knew of this additional procedure at the time. The Genegineer did not support Cameron Hodge’s rule, so he tweaked the bonding process for Wolfsbane in such a way that she was only a mindless mutate in her human form. Her treatment completed, Hodge made Rahne, or Mutate 490 as she was then called, appear on TV and confess that she was guilty of several crimes, had seen her error and volunteered to undergo the mutate bonding process. However, when she later changed into her transitional wolf form, she had her own mind back and was more powerful than ever. 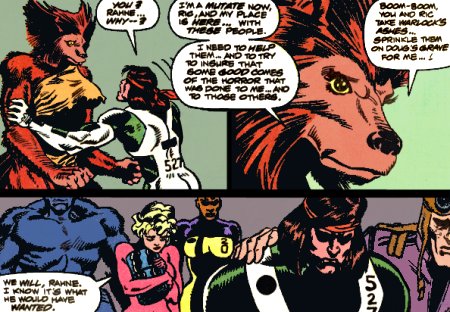 After the X-teams won and defeated Hodge, Rahne apologized to Rictor that she could not return with him. Instead, she wanted to stay on Genosha, alongside Havok, to ensure that the new government would acknowledge mutants as equal citizens. Though nobody suspected it at the time, that decision was surely influenced by the emotional link with her “master.” [X-Tinction Agenda]

Several weeks later, after a fight with the Shadow King, the X-teams were restructured. X-Factor was turned into the US government’s official mutant team 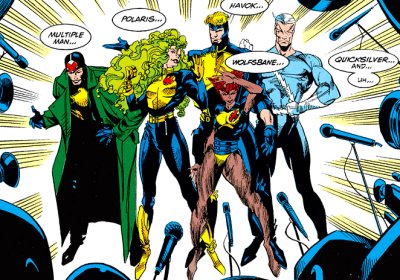 and Val Cooper traveled to Genosha to ask Havok to become the group’s leader. Though not interested at first, Havok accepted the offer upon learning that Polaris was among the group too. Rahne was not really invited to join the team but she tagged along nonetheless, once more being affected by her unsuspected emotional link to Havok. [X-Factor (1st series) #71-72] 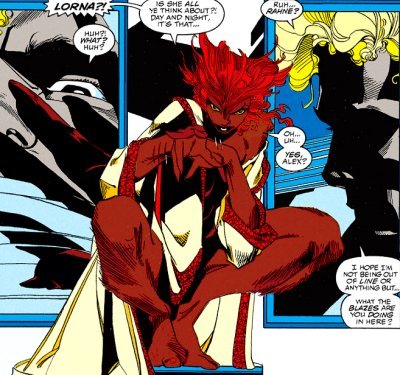 Before long, though, Rahne’s unnatural devotion to him was noticed by her friends and teammates. Still, even when Rahne began stalking him and acting jealously towards his girlfriend, Polaris, the others at first believed it to be no more than a harmless teenage crush. Wolfsbane also experimented with her looks, trying to keep her transitional form as human-looking as possible, since she couldn’t turn human. Problem was that turning full-wolf also had become dangerous, as she couldn’t fully control herself in that form. [X-Factor (1st series) #73-74]

This became painfully clear when the government sent the team to the country of Trans-Sabal where they were to help the government against the rebels. 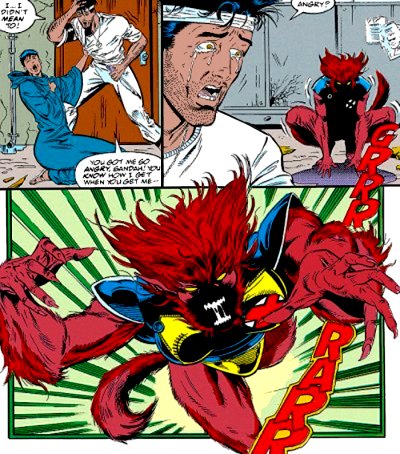 Rahne got split from the others and ended up a prisoner of a Trans-Sabalian young man and his sister who believed she was helping the rebels. After having a heated discussion about women’s rights with the stubborn young man, Wolfsbane finally tried to flee. When the youth went after her with a knife, his sister knocked him out and freed Rahne, deciding that she was right. Rahne ran off but then heard a scream. She returned to see that the young man in his anger had stabbed his sister. Rahne went ballistic and tore him apart. When Quicksilver found her, she didn’t tell him what happened but expressed the fear that she’d be damned to hell. [X-Factor (1st series) #76, Incredible Hulk (2nd series) #391-392]