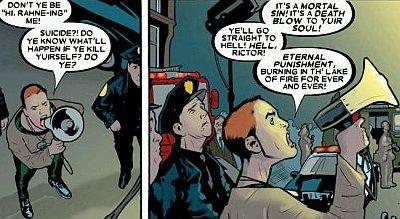 Rahne easily fit in among the crew at X-Factor Investigations, most being former teammates and close friends. Despite slipping back into a very familiar role among the team and embracing their work as private investigators and defenders of Mutant Town, her life was not without drama. After only a short time with X-Factor Investigations, Rahne had to deal with her ex-boyfriend Rictor’s suicide attempt. Rictor was ready to jump off the ledge of a building, unable to cope with the loss of his powers after M-Day. Rahne tried to dissuade him, passionately reminding him that suicide was a mortal sin. However, the decision was taken out of Ric's hands as a rogue Madrox dupe actually pushed him off. Though Rahne was ready to catch him, M swooped in and saved the day. [X-Factor (3rd series) #1-2]

Things took a turn for the odd when a scientist named Buchanan hired X-Factor to investigate his former company, Singularity. 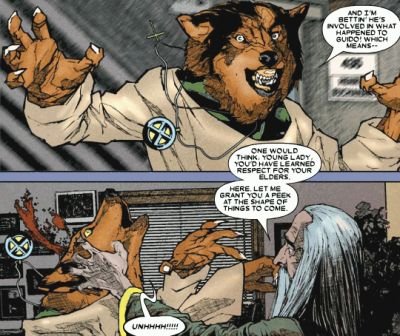 Guido was tasked with transporting Buchanan but ended up killing him en route. When Guido returned and claimed ignorance over what happened to Buchanan, Rahne’s hyper-senses detected the scientist’s blood and spittle on Guido’s hand. Together, X-Factor defeated the brainwashed Strong Guy. The team later infiltrated Singularity headquarters to search Buchanan’s office and ran into an elderly version of Damian Tryp, the company's president. This version of Mr. Tryp implanted a future vision in Rahne’s head of her killing Jamie and Layla on their wedding night. The shock of what she’d seen knocked Rahne unconsciousness. [X-Factor (3rd series)#10-12]

Sometime later, Rictor approached Rahne about her “seeming out of sorts.” Rahne refused to tell him what was bothering her. Tryp's vision showed her murdering Madrox and Layla Miller on their wedding night at some unspecified point in the future. Their conversation quickly turned ugly and became a heated argument during which some nasty things were said. When cries for help from a nearby alleyway interrupted them, Rahne and Rictor investigated and saw what appeared to be two grown men mugging a young boy. They stopped the “muggers” and the boy ran off. When they checked for I.D., it turned out the men were F.B.I. agents who were attempting to arrest the "boy", Elijah Cross - the leader of the terrorist group X-Cell. Ric and Rahne were arrested for their interference, but released after Madrox made a deal with Val Cooper to help them capture Elijah Cross. A major fight ensued between X-Factor and the depowered mutants who were members of the X-Cell. During the conflict, Rictor was taken by Quicksilver who had allied himself with the X-Cell. Quicksilver was working to reignite the lost powers of X-Cell's members using the Inhuman's Terrigen Crystals. He offered to do the same for Rictor. Ric was unaware that Pietro was also using him as a power conduit for his efforts to repower the others. This worked temporarily but left those who benefited from the repowering unstable and in danger of exploding. Though Rahne fared poorly in combat against X-Cell, she proved herself when her keen senses tracked down Rictor. Rictor confronted Pietro when he realized how Quicksilver had used him and rejected both his offer and his re-emerging power. This forced all of the stolen Terrigen Crystals out of Quicksilver's body. Rahne helped to reassure Julio, who was severely weakened from his ordeal. [X-Factor (3rd series) #17-20] 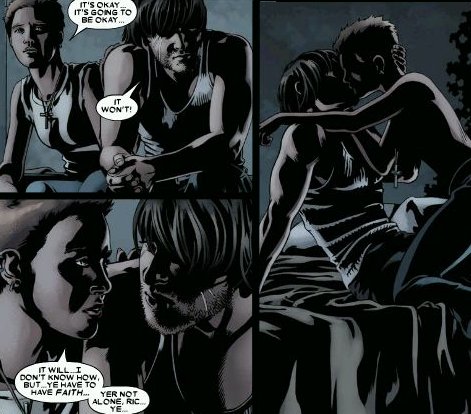 Afterward, Rictor was devastated at having come so close to regaining his powers only to lose them again. As Rahne consoled him, a combination of Rictor’s vulnerability and their past relationship rekindled old feelings and the two made love. The next day, Rahne spoke with Rictor and claimed that what had happened between them was a mistake and she only slept with him because she pitied him. Rictor didn't seem to care and furthermore, told Rahne that she might actually be trying to break things off because she felt feelings of shame and perhaps a bit of fear that she had allowed her wolf side to take over, something he was well aware that she worried about. Rahne tried to argue that he was wrong. When Julio refused to back down, she threw herself at him once again, kissing him passionately and clawing his back in the heat of the moment. [X-Factor (3rd series) #21-22]
When the first mutant born since M-Day went missing, Rahne was instrumental in getting a mole inside the Purifier Church. She was sent to spy on them, but also to get noticed. During her subsequent escape, she was "shot" by Rictor, a supposed random passerby. Some theatrical blood squibs made it look as if she had been killed. Their ruse worked and Rictor was accepted into the church’s ranks. When Cable inexplicably absconded with the “mutant messiah,” 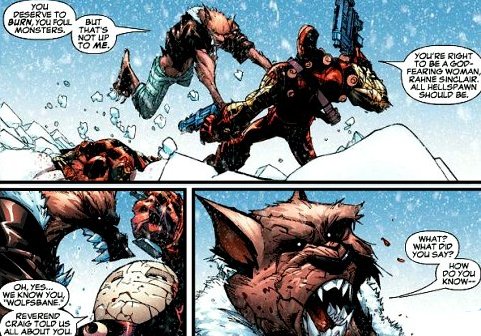 Cyclops realized he needed a different type of team and charged Wolverine and a newly created X-Force comprised of their best trackers with finding him. Recruited as a member, Rahne left with X-Force for the child's birthplace, Cooperstown, Alaska where they found Cable in the thick of battle with Lady Deathstrike and the Reavers. Wolfsbane was disgusted to see the fanatical Purifiers involved, spewing hate and violence in God's name. During the fray, Wolfsbane learned that her father, Reverend Craig, might be involved with the mutant-hating Purifiers. She also inadvertently kicked one of her foes off a cliff while defending herself. [X-Factor (3rd series) #25-26, New X-Men (2nd series) #45-46]

This sinister revelation about her father, coupled with the haunting vision of murdering Jamie and Layla and her sudden passionate relationship with Rictor, left Rahne once more in a state of confusion and conflict. So she made the decision to quit X-Factor. Though she told Jamie of her decision and of the horrific vision leading to her decision, she only left Ric a note on her bed, ditching him again like she did in Genosha. [X-Factor (3rd series) #28] 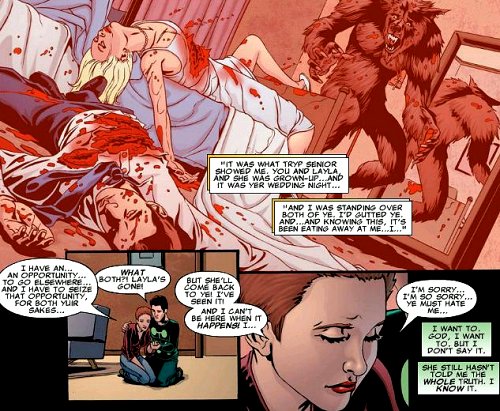 Determined to learn more about her father, Rahne volunteered to join Cyclops’ black-ops team, X-Force, which continued on a clandestine basis. Wolverine did not agree to it, deeming her too good-natured, but this did not deter Rahne and she went at it alone and was captured by the Purifiers. When X-Force found her, a battle ensued and Rahne was shot in the knee. In all the confusion, her captors escaped with her in tow and took her to a different base in Montana. 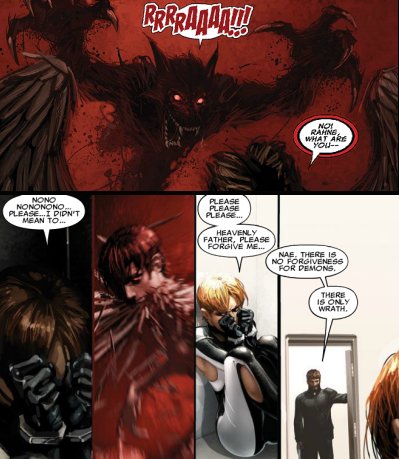 There, Rahne was confronted by Craig, who declared himself her Inquisitor and brainwashed her. The team finally tracked her down, but found her alone and seizing from a heroin overdose. Elixir was brought in by Angel to heal Rahne. However, they had no idea Wolfsbane had been brainwashed. When she came to and saw Angel she attacked him viciously, gnawing his wings off at the shoulders in a near surgical fashion as she had been programmed to do. Rahne then called her handlers to pick her up and handed over the wings to the Purifiers. They used their techno-organic capabilities and Angel's wings to create the Choir, an army of humans with deadly techno-organic wings. 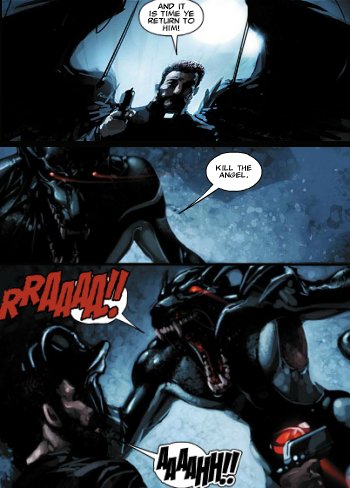 With her mission a success, the Purifiers had no more use for Rahne and gave her to her father to finish her. When she realized what she had been forced to do, she was wracked with guilt and remorse. The Reverend Craig arrived to kill her and shot at her. She managed to break free of her handcuffs and fled to a separate lab. Craig found her there and was determined to end her life. But he ended up standing directly in front of where they were keeping Warren’s wings. Looking up at her father from her perspective, Rahne saw a winged man. This reactivated her programming and compelled her to attack him. When she was done, there was nothing substantial enough left to identify her father, who had ultimately been a victim of his own hatred. [X-Force (3rd series) #1-6]

Following this disaster, Rahne had to be mentally deprogrammed by the Stepford Cuckoos, otherwise she could never be in Warren’s presence again. She convalesced at Warren’s Colorado Aerie while X-Force was away on a mission. Unfortunately, she was plagued by nightmares of her killing Craig.