On one such sleepless night, she looked out the window and was surprised to find her old Asgardian love, Hrimhari. Rahne learned of Hrimhari’s death at the hands of the Frost Giants and his rebirth on Midgard, all part of the Norse Ragnarok cycle. He confessed that he felt he was reborn on Midgard to be with Rahne. The rebirth had bound him to Earth and he could now assume a human form. 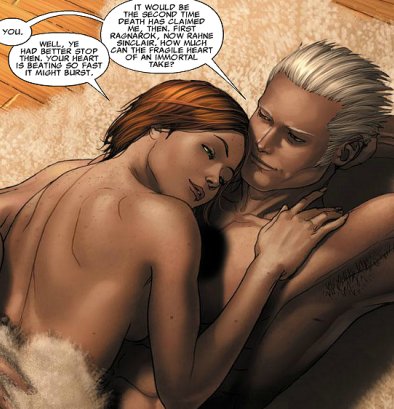 Rahne explained that she wasn’t the same girl he met years earlier and that she had changed for the worse. This did not deter Hrimhari, who told Rahne she was the love of his life. Rahne told him she felt the same way and they made love in their human forms. [X-Force (3rd series) #7-10, 12-13]

After days of merriment and love-making, Rahne and Hrimhari were attacked by three Frost Giants. They transformed into wolves and stood their ground, defeating their powerful enemies. Afterward, Wolfsbane collapsed and Hrimhari brought her back to the Aerie, where he found Angel and Warpath surveying the damage. Rahne was boarded onto the X-Jet and taken to Utopia in the hopes of using Elixir to heal her once again. However, as they neared their destination, the jet was shot down by Selene’s undead forces, which were attacking Utopia at the time. Everyone survived this assault and using Hrimhari’s incredible sense of smell, they found their way to the medical wing. Here they discovered that Elixir was also in a coma and would be of no help in saving Rahne. 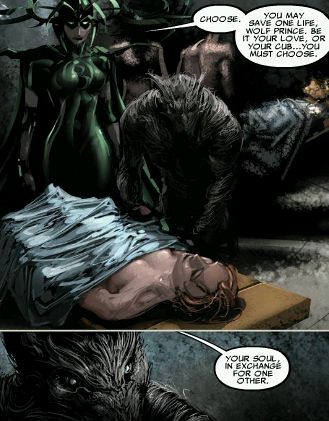 Dr. Nemesis was on site and examined Wolfsbane. He ran a CT scan, at which point he discovered Rahne was pregnant and it was the super-strong baby that was killing her. With no other recourse, Hrimhari left the medical bay and cried out in his wolfen form for Hela, the Asgardian Queen of the Dead. She offered to save one life in exchange for his soul, but told Hrimhari that he’d have to choose between Rahne and their baby. Hrimhari agreed to her deal, but instead chose Elixir to be saved. As soon as Elixir awoke, he healed and strengthened Rahne so she could survive the baby’s birth. Hela departed with Hrimhari who begged Foley to save his beloved and their child and swore to Rahne that he would find a way back to her. [X-Force (3rd series) #17-23, X-Necrosha #1]

Elixir saved Rahne's life by modifying her DNA to match that of her unborn child. This endowed her with the physical strength and endurance necessary to carry the child to term without harm. As Utopia was under attack by Selene's forces, Rahne had little time to process the news of her pregnancy or Hrimhari's sacrifice on her behalf. She and the rest of X-Force were immediately teleported by the Vanisher to Genosha to put a stop to Selene’s plans to ascend to goddesshood. When faced with thousands of undead slaves, Rahne discovered she now had increased strength and senses, along with denser skin that could stop a bullet thanks to Elixir’s handiwork. The team emerged victorious when Warpath stabbed Selene in the heart with a mystically enhanced blade. [X-Force (3rd series) #24-25] 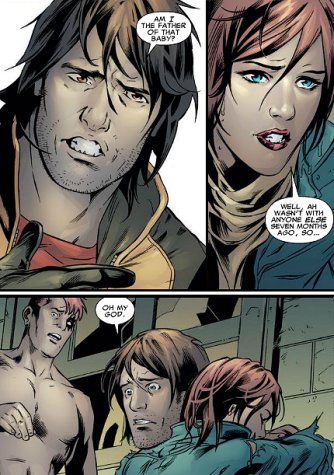 Now having an unborn child to consider, Rahne immediately left the X-Force fold and decided to return to X-Factor. However, by the time she arrived, Rahne had experienced an accelerated gestational period and appeared to be about seven months, rather than several weeks, pregnant. Additionally, Rahne’s return was ill-timed, as she walked in on Rictor in the middle of a romantic encounter with his newly returned former lover, Shatterstar. As shocked as Rictor was at seeing a very pregnant Rahne, Rahne flew into a rage and attacked Shatterstar, tackling him out of a two-story window. When the two were finally separated, Rictor was finally able to ask if the baby was his. Though she deftly avoided lying, Rahne allowed him to infer from her response that it was. [X-Factor (1st series) #207-208]

The ruse didn’t last long. When Rahne and Rictor went to the doctor’s for an ultrasound, no image would appear as if the baby was being protected through mystical means. Rahne confessed that Hrimhari was the father and overcome with embarrassment, she ditched Rictor who left to tell everything to Shatterstar. Using Pip the Troll’s teleportation power, Shatterstar tracked down Rahne and they had a heart-to-heart about her reasons for tricking Rictor. Rahne admitted that she did it in an effort to save Rictor’s soul, since he was in a “sinful” gay relationship. Once she said it aloud, she realized how silly it sounded. They both laughed about the ordeal and decided that they would all raise the baby together. [X-Factor (1st series) #210, 213] 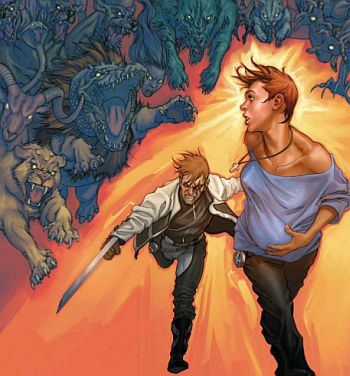 About a week later, Rahne went for a walk to church with Shatterstar, who was quickly becoming a close friend. When they neared the church, they were shocked to find the entire congregation within slaughtered and a demonic creature called the Sin-Eater waiting for Rahne. The Sin-Eater explained that the impending birth of Rahne’s half-Asgardian, half-mutant child was breaking down the barriers between worlds. The creature offered to absolve Rahne of her sins if she would just give up the baby. When Rahne refused, the demon attacked. Together, Shatterstar and Rahne were able to fend off and kill the demon. Their respite did not last long, as they soon ran into the ghost of Feral, who told them she was serving as an anchor and spiritual guide for a host of powerful creatures in their quest to acquire Rahne's child. Wolfsbane and Shatterstar were attacked by a succession of otherworldly creatures and deities: Cu Sith (an Irish demon dog), Bastet (a lion-like Egyptian goddess) and finally Okami and Kasha (Japanese demons), all of them hoping for Sinclair’s unborn child.

X-Factor did their best to defend Wolfsbane but they didn’t stand a chance against these powerful creatures. It was the timely arrival of Jack Russell, the Werewolf by Night, who managed to fight them all off. Russell had also felt the calling of Rahne’s baby and had come to help. To protect her friends from more trouble, Rahne left with Jack in his car without explanation. Unfortunately, Feral's spirit tagged along and taunted Rahne with her knowledge of the truth behind the death of Reverend Craig which Rahne had been in deep denial about. With Feral around, they were soon found by Cerberus, the three-headed monster dog of Greek legend. Cerberus tossed their car into a heavily forested area. Jack stayed to fight off another attack while Rahne, feeling the pangs of labor, sought shelter. The Asgardian Fenris wolf and X-Factor both arrived to aid Russell, but Rahne was nowhere to be found.

As she began going into labor, she was led by a “boy” named Agamemnon to his “parents'” cabin nearby. Agamemnon was just another powerful Asgardian godling hoping to gain control of Rahne's baby. He chained her to the basement floor with enchanted chains on top of a sigil to keep her in place. He told Rahne of an impending war between the gods and that her god/mutant hybrid child would be a major player and who ever controlled it would be the victor.

Rahne soon gave birth and the child's entry into the world reflected the mystical nature of the pregnancy. Rahne, in her wolfen form, regurgitated the infant like a hairball. Though newborn, Rahne’s wolfen son was self-aware and clearly deadly. The circle which held Rahne could not hold the baby and it attacked Agamemnon, tearing a hole through his midsection. This released Rahne from the chains but when she looked at her son and what he had done, she was overwhelmed with shock and rejected him. Crestfallen, the baby ran away. He was nearly claimed by Hela herself who promised to introduce him to his father, Hrimhari. But the frightened cub was rescued from her clutches by Jack Russell, who took him into his care. [X-Factor (1st series) #220-224]