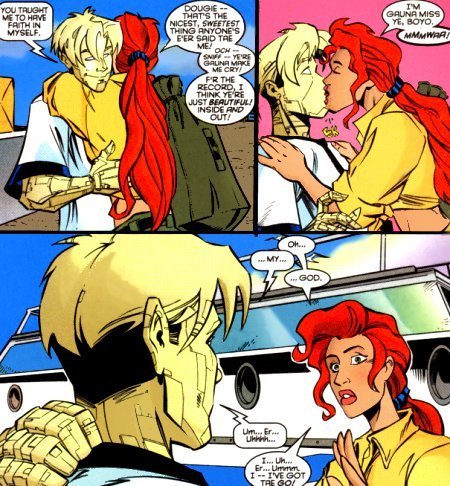 In time, Rahne also befriended Douglock and, unlike Kitty Pryde, she was able to accept him as his own person, instead of just seeing him as Douglas Ramsey reborn. [Excalibur (1st series) #104-105]

Douglock also provided a shoulder to cry on, for Rahne was concerned about her foster mother working too much in her labs, when actually she should have rested more, due to her Legacy Virus infection. Eventually, the friendship evolved into something more, as the two exchanged a kiss and became romantically interested in each another, though both found themselves troubled by second thoughts at the same time. [Excalibur (1st series) #108, 113] 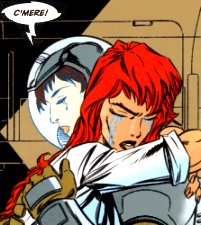 At that point, Moira was so determined to find a cure for the Legacy Virus that she decided to further examine her illness in quarantine. Rahne tried her best to convince her to not do so. She even had Moira’s on-and-off lover, Banshee, try to talk some sense in to the woman, to no avail. Eventually, Moira made her good-byes to everyone and locked herself up in her lab, the locks pre-programmed only to open when she would have found the cure. Unwilling to let her go alone, Rahne joined her in the last possible instant, leaping through the door before it slammed shut. It was a rather stupid move, for as she was not wearing a containment suit, like Moira, it meant that she would be exposed to the Virus night and day. [Excalibur (1st series) #115] 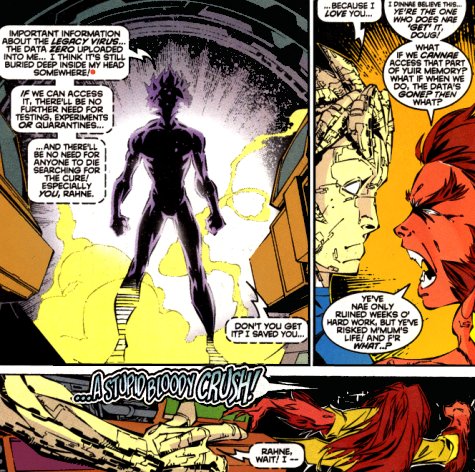 Worried sick, Douglock tried everything he could to breach the seal around the lab but the computer system kicked him out each time. Eventually, he had a different idea and succeeded to make the systems think that the cure had been found. The quarantine was ended and Douglock entered the lab, only to meet a furious Rahne, for she felt that Douglock’s selfish act, based on the wish to continue their fling, terminated Moira’s final chance for a cure. [Excalibur (1st series) #118-120]

Over the next few days, Moira made Rahne see her error and she forgave Douglock, right in time for them to attend the wedding of Meggan and Captain Britain together. Following Excalibur’s disbanding, Rahne and Douglock both stayed on Muir Island. [Excalibur (1st series) #121-125] A few weeks later, though, the techno-organic individual was abducted by the Red Skull and, though he was rescued by the X-Men not much later, the Skull’s tampering with his systems revealed him to be really Warlock, with some of Doug Ramsey’s personality engrams written over his core. Those files erased, he was once more Warlock, thus ending whatever romantic interest Rahne still had in him.

Months later, the island lab was infiltrated by the mutant terrorist, Mystique, who had taken Moira’s shape to steal her notes on the Legacy Virus and turn it into a disease targeting only baseline humans. Rahne sniffed her out but was no match for Mystique and Sabretooth, who would have killed the girl if it hadn’t been for an intervening group of X-Men. Nevertheless, Mystique managed to shoot Rahne with a version of Forge’s Neutralizer gun, which resulted in a seemingly permanent loss of her mutant powers. What was far worse, though, was that a bomb planted by Mystique detonated the lab in an attempt to cover her tracks. Moira sustained heavy injuries during the explosion and died during on the way back to Xavier’s mansion, where the X-Men wanted to take her for treatment. Rahne vowed vengeance on Mystique. [Dream’s End]

Trying to come to terms with everything that happened, Rahne attended a school in New York for some time. On a school trip, she was mugged and the necklace given to her by Robert the Bruce was stolen. Rahne recovered unnaturally fast, hinting that her healing factor might still be existent, as well as her rapport with Dani, who had come to her bedside. Along with several other former New Mutants, they found the muggers and got back the necklace. [X-Men Unlimited (1st series) #43]

Still depressed over Moira’s death, Rahne became a bit reckless, wandering the country on her motorcycle and getting into fights. Now lacking powers, Rahne relied on ingenuity and demonstrated such when she returned to Xavier’s school and took out the mutant villain, Avalanche, with nothing but her motorbike. 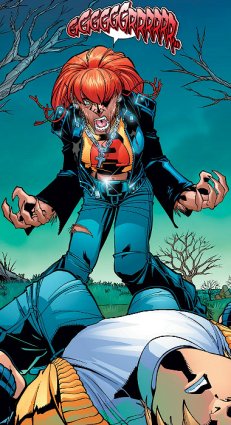 Her friends, Karma and Moonstar, were surprised by the changes in Rahne, who now dressed provocatively, was much more outgoing (in fact aggressively so) and deliberately suppressed all vestiges of her accent. Rahne seemed to delight in breaking the rules and asked some new students – against Dani’s express orders – to sneak out of the mansion and find a mystery mutant running around in Salem Center. One of the new students, a healer named Josh Foley, made Rahne admit to herself that she was acting that way because she missed the wild side that, in the past, she was able to express with her wolfen form. When an intimate moment led to a kiss, Josh inadvertently used his healing powers on Rahne, whose powers suddenly returned, transforming her to into her transitional form.

The shock of the transformation caused Rahne to lose control and she instinctively tore into Josh’s fragile body. He collapsed to the ground, bleeding profusely. Just then, Laurie Collins exited the school to find Josh near death, with Rahne’s half-wolfen form standing over him. A furious Wallflower used her pheromone powers to instill fear in Rahne and it worked, as she ran off into the woods.

After Josh was brought inside for medical treatment, Dani used their renewed telepathic link to find her scared friend. Rahne blamed her actions on her lack of control over the wolf, but Dani knew better, having been inside her mind. Dani’s talk finally got through to Rahne and she reverted back to human form, though she questioned what it meant about herself if she needed the wolf. She returned to the school and apologized to Josh, who had managed to heal his wounds himself. [New Mutants (2nd series) #9-12]

Following Xorn’s attack on the school, the students were moved to X-Corporation’s New York office. More former New Mutants arrived to help out. During this unexpected reunion, a kiss nearly occurred between Rahne and her old crush, Sam as he was giving her a much needed pep talk. The reunited New Mutants had a final showdown against Donald Pierce and his Reavers who sought to take out the latest class of Xavier's students. After the battle, Sam wanted to talk about the near kiss, but Rahne acted like it was nothing, chalking it up to her renewed animal instincts. [New Mutants (2nd series) #13] 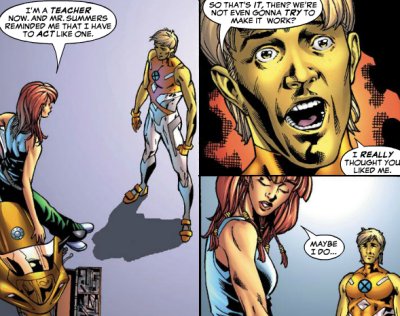 Rahne remained at the Institute and took a position as a teacher and student advisor. When the student body was divided into training teams, Rahne’s group was called the Paragons and consisted of DJ, Match, Pixie, Preview, Trance and Wolf Cub. In this new role, Rahne discovered a new sense of enthusiasm and purpose that she had been in dire need of after so many personal problems and setbacks. Despite her feelings of guilt, for a short while, Rahne continued a secret romance with Josh despite now being part of the school's staff. However, after a talk with Scott, who told Rahne to act more like a teacher, she decided to break it off. This did not keep her from getting jealous of Laurie and Josh when they started dating. [New X-Men (2nd series) #3-4]

During this time, Rahne took a short leave of absence to visit her old friend, Jamie Madrox, at his detective agency in Mutant Town. When Jamie “prime” left for Chicago to investigate why one of his dupes was murdered, Rahne stayed behind with Strong Guy and a dupe and took on a case of possible infidelity. Rahne went on stakeout and discovered the husband cheating on his wife via astral form. Rahne was caught spying by this psionic wraith and it attacked her. Rahne clawed the husband’s astral form, which resulted in him dying in his sleep. Though it was unintentional, Rahne was very upset at having caused the man's death. [Madrox #1-5] 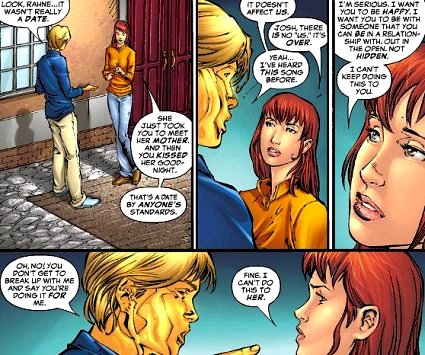 When she rejoined the Institute, Rahne’s romance with Josh was rekindled when he kissed her yet again. They kept their occasional romantic encounters a secret but when Josh went on a semi-date with Laurie, Rahne decided to call it quits for good this time. Despite her attraction to Josh and the confused feelings she felt, she realized that it was wrong for this to continue not only because she was a teacher but because what they were doing could hurt Laurie deeply. Unfortunately, Kevin Ford who had feelings for Laurie himself, witnessed the whole thing. [New X-Men (2nd series) #6-9] 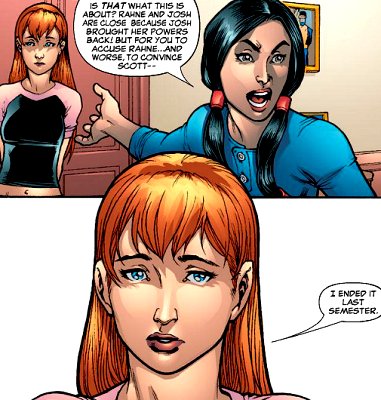 Kevin eventually went to the headmasters with the details of Rahne’s inappropriate relationship with Elixir, at which point she was called before Scott and Emma and read the riot act. Dani was also called in as she was Josh's guardian. She quickly defended Rahne and was shocked when her dear friend confessed to the brief affair and assured them that she had ended it. Dani was deeply hurt and made no secret of how upset she was with Rahne. Scott apologized to Rahne and realized that they had been unwise to place in her in a position of such responsibility after all the turmoil in her life since Moira's death and the loss of her powers. Before Scott and Emma could decide what to do with her, Rahne told them she was quitting. She decided she needed time away from it all and headed off on her motorcycle to rejoin Jamie at his detective agency. [New X-Men (2nd series) #12]