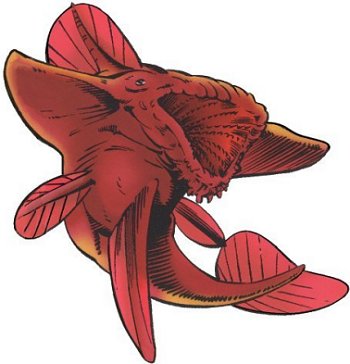 The Acanti, a brilliant race of peaceful aliens resembling cosmic whales, have existed in the universe for as long as life itself. They communicate with each other through song, can travel faster than light, and possess telepathic abilities. The spiritual opposite of the Brood, they embody virtue, goodness, peace, and knowledge.

Physically, the Acanti are enormous. Their ribcages can measure approximately 100 miles (160.9 kilometers) across and their spines 1,000 miles (1,609.3 kilometers) long. Although this sounds small from a stellar perspective, it is enormous relative to any earthly mammal. For reference, when Wolverine stands in the bottom of a decaying Acanti corpse on Sleazeworld, he comments that the top of the creature's ribs extend beyond the breathable atmosphere. Mt. Everest, the tallest mountain on Earth, touches the outer limits of the breathable atmosphere at 8,848 meters. [Uncanny X-Men #162] The span of an Acanti's ribcage, at 160.9 kilometers, would therefore equal roughly the height of eighteen Mt. Everests, stacked end to end. Similarly, while Iron Man was waylaid in a jungle ecosystem inside the body of an Acanti, his armor—some of the most advanced machinery on Earth—could not even compute the size of its container. [Contest of Champions II #2] 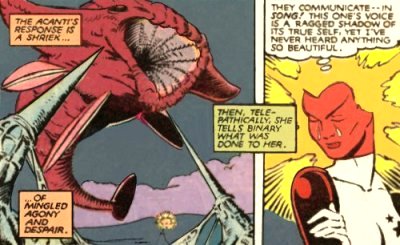 The Acanti have several adaptations that prove useful to living in space. They are capable of faster-than-light travel, although the means through which they accomplish this feat are unknown. They are also able to communicate telepathically, a necessity in the vacuum of space. Binary first discovered this ability when a mother Acanti telepathically relayed to her the horrors of its slavery. Additionally, upon hearing its voice in her head, Binary realized the Acanti communicated with one another through song. As a further extension of their telepathic prowess, the Acanti are capable of astral projection. When the newborn Prophet-Singer integrated with the dying Storm, for example, Ororo managed to create an astral projection of her old body which she used to communicate with her teammates. The combination of their sheer size and these telepathic abilities makes the Acanti ideal space travelers. [Uncanny X-Men #166] 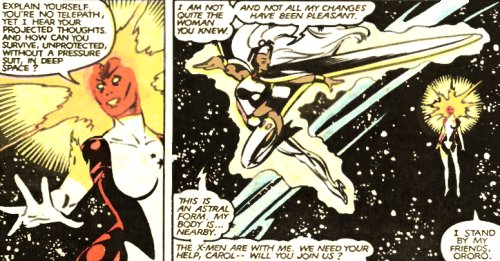 Spiritually, the Acanti have much respect for death, rebirth and resurrection—a value system tied to the role stars play in their life cycle. As an individual Acanti nears death, it must hurl itself into a star to be consumed by the universe which gave it life. Its soul is then recycled and passed along. For this reason, the Acanti serenade the stars with their beautiful music in worship. This step in the process of death and rebirth is of crucial import to the Acanti Prophet-Singer, who serves as the spiritual leader of the entire species. It carries with it the racial soul and memory of its species over the course of its life. Because the Acanti are said to embody the racial history of the universe, it is likely this racial history resides in the soul of the Prophet-Singer. [Contest of Champions II #2] This racial soul cannot be passed along to the successor unless the Prophet-Singer is consumed by a star.

The Brood significantly disrupted the reproduction cycle of the Acanti and threatened the entire race with extinction during one of their first confrontations. Shortly after arriving in the Milky Way Galaxy, the Brood encountered the massive, space-traveling Acanti. Not the kind of race that passes up an opportunity to exploit other species, the Brood realized it would be easier to take advantage of creatures already capable of space travel and use them as vessels instead of building their own ships from scratch. The Brood developed an irreversible "slaver virus" they used to cripple the higher brain functions of the Acanti. Infected Acanti lost their sense of self-awareness and all the higher, conscious functions of the brain, essentially becoming mindless slaves. After infection, the Brood would infest the enslaved Acanti's body, using it as a space ship while consuming its living tissue for food. Whenever the Brood found new, inhabitable planets they wanted to populate, they would load up their most elder Acanti slave vessel and crash it on the planet's surface. They would then emerge from its decimated corpse and begin their planetary pillage. [Uncanny X-Men #166]

The Acanti might not have fallen victim to the menace of the Brood had the Brood not managed to enslave the sole Acanti Prophet-Singer on their first hunt. This crippled Prophet-Singer served as a living starship from that point and was unable to pass along the racial soul. After it wore out its usefulness, the Brood crashed it on "Sleazeworld" and used it as a home-base for their subversion of the planet. The singer-soul, trapped inside the decaying corpse of the Prophet-Singer, remained there, and the Acanti race remained bound to it. If they left the vicinity of Sleazeworld, they would not survive another generation, but sticking around was not productive either. Around the time the X-Men first encountered the Brood, a new Acanti Prophet-Singer was born, but because it could not inherit the racial soul from its progenitor, it could not serve its intended purpose and instead drifted aimlessly. It was not until Binary released the racial soul from the dead Prophet-Singer's body on Sleazeworld that the Acanti could resume their peaceful way of life. [Uncanny X-Men #166] 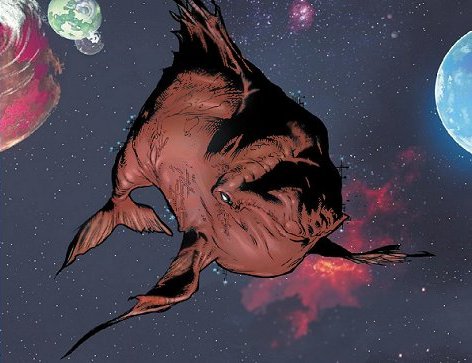