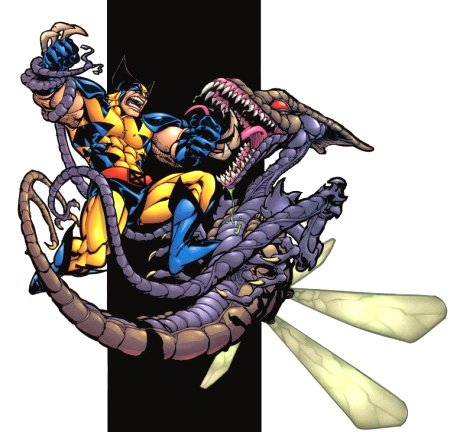 Naturally, all non-Brood life-forms automatically fall under the category of “enemies” for the Brood, targeted either as potential hosts or sustenance. However, there are certain beings that have inflicted significant damage on the Brood, even drastically reducing their numbers on certain occasions. These prime enemies are hated and feared by the Brood and as such are often the targets of the Brood's appetite for vengeance.

Wolverine
First appearance: Incredible Hulk (2nd series) #180
First Brood appearance: Uncanny X-Men #155
Abilities: Enhanced strength, speed, agility, stamina, and reflexes, hyper-keen senses, healing factor, adamantium skeleton and retractable claws
To quote Tyrus Krill’s own words, Wolverine is “renowned throughout the universe as a mortal enemy and a profound slayer of the Brood.” [Wolverine Annual #2000] Starting with Skorskill, Wolverine has slain dozens of Brood over the years earning him the title of the most notorious of the X-Men among the Sleazoids.

Lockheed
First appearance: Uncanny X-Men #166
Abilities: Tiny dragon-like creature that can exhale high-temperature fire and has wings allowing him to fly
Lockheed belongs to the alien race known as the Flock, who were sought as food by the Brood. According to his near-death vision in Excalibur (1st series) #40, Lockheed became the most acclaimed hero of his race after he repeatedly battled the Brood and purportedly reduced their ranks to near-zero. However, he suddenly fled one day, leaving his fiance at the altar. The wedding was never to be as Lockheed was soon teleported with the rest of the X-Men away from the Sleazeworld to Earth. [Excalibur (1st series) #40]

Binary (Carol Danvers)
First appearance: Marvel Super-Heroes (1st series) #13
First appearance (as Binary): Uncanny X-Men #164
Abilities: Genetic experiments by the Brood altered her Kree/human genes to give her the power to tap into the energies of a white hole, which she can utilize to augment her strength, stamina, reflexes and durability, manipulate anti-gravitons for flight, project stellar energy blasts, and absorb various forms of electromagnetic energy to boost her powers.

Along with the X-Men, Carol was once captured by the Brood and brought to the Sleazeworld where she was subjected to evolutionary modification by two Brood scientists who were keen on tapping her genetic potential. As a result of the experiments, Carol began to wield cosmic-level powers. Dubbing herself Binary, she secured a legendary status for herself among the race of the Brood when she used her newfound abilities to unleash the soul of the Acanti prophet-singer, an act that triggered the release of massive cosmic energies that brought about the destruction of the Sleazeworld. Several years later, Carol had the chance for a re-match with the Brood Queen known as the Great Mother who she thought had perished quite some time earlier in the annihilation of Sleazeworld. [Uncanny X-Men #164-166]

Tyrus Krill
First appearance: Wolverine Annual 2000
Abilities: Enhanced strength, plus a wide arsenal of weaponry that includes a harpoon, guns, M’Zara Blood Flies, a sonic emitter specifically attuned to a frequency only the Brood can hear, and a device that masks his own Brood scent

Formerly a scientist and interstellar explorer, Tyrus Krill and his family were ambushed by a Brood vessel. The Brood infected Tryus and cornered his wife Ulara and children Zet and Jexia in an escape pod, where it infected them as well. In horror, Tyrus jettisoned them in the escape vessel. He then realized he had set more Brood free in the galaxy and vowed to hunt them down and terminate their lives. He gained a reputation as a bounty-hunter who specialized in Brood, even earning the nickname “Scourge of the Brood” from some of his victims. He followed this rogue colony of Brood to Earth, where he enlisted Wolverine’s help in ending their lives— as well as his own when he finally allowed himself to succumb to his own Brood infection.

First appearance: Wolverine Annual 2000
The M’Zara Blood Flies are a parasitic species that injects itself into the bodies of the Brood and devours their insides in a matter of seconds, causing the Brood to explode.

Cru
First appearance: Ms. Marvel (2nd series) #2
Last appearance: Ms. Marvel (2nd series) #24 (killed by the Brood Great Mother)
Abilities: Cru can absorb and channel radiant energy. She has control of her body down to the cellular level. She has “rebuild and repair” protocols which prevent her from easily dying. She can piggyback into other beings and survive in their bodies, even if only at the cellular level, until she can repair her own, all the while communicating with her host telepathically.

Cru comes from an unnamed race of alien species that has no separate concepts of organic life and technology. Seeking revenge for the Brood’s slaughter of her family and her home-world, Cru subjected herself to experimental augmentation in order to become an adept Brood hunter. As a Brood bounty hunter, she brought the entire race to the brink of extinction using her formidable powers before she was finally killed by a Brood Queen during a battle for Earth.