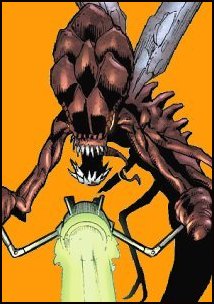 Being a parasitic species of the highest order, it comes as no surprise that the Brood also assimilates entire cultures and planets for its own benefit. The Brood also possesses considerably advanced technologies it may or may not have developed itself. The first time individual Brood engaged the X-Men in battle, they fought using two-handed ray guns equipped with varying offensive features, such as psychic distorters, ensnarement webs and corrosive acid rounds. [Uncanny X-Men #155] The Brood also employed flash grenades against the X-Men at one point, and later, even experimented with the DNA of Carol Danvers. [Uncanny X-Men #162, 163] Other technologies in Brood possession included microorganisms that reconfigured the neurological functions of their subjects, as well as the machinery required to terra-form inhospitable planets.

This leads to a pressing question: how did the Brood— a species that seems to exist entirely to reproduce— create such advanced technology? While it is entirely possible that the Brood developed all of its own technology, it is equally likely the Brood did not, considering the species’ reproductive strategy. The Brood procreates using the bodies of unwilling aliens as embryonic hosts. Stealing technology from these aliens would be a logical afterthought. 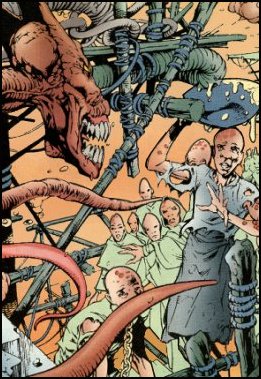 In addition to using them as hosts for its embryos, the Brood has been shown to enslave other species for logistical reasons. On the planet referred to as the Brood “Nest World”, the Brood had an unassimilated, humanoid slave race to perform its manual labor. [X-Men vs. the Brood: Day of Wrath #1] That the Brood refrained from using these slaves for procreation suggests that it exercises judgment when choosing to either incorporate a species or exploit it for other means.

The Brood displayed similar judgment with the Star Sharks—large cosmic creatures that resemble Earth’s order of carnivorous fish. Perhaps the Star Sharks offered the Brood something it lacked with the Acanti: maneuverability in battle. Durable and vastly smaller than the Acanti, the Star Sharks were used by the Brood like cosmic fighter planes. They have jet-thrusters on their sides and rocket-propulsion systems on their rears that appear to increase their flight speed and maneuverability. It is unknown whether these are endemic physical traits, if they were added by the Brood, or if they were added by something else entirely.

After the X-Men freed the Acanti, the Brood seemingly resorted to using the Star Sharks for interplanetary travel. The first time members of the Brood arrived on Earth, they crash-landed in a Star Shark. [Uncanny X-Men #232] It is never made quite clear whether the Star Sharks are sentient creatures or not. However, they could have once been sentient, but rendered compliant by a “Slaver Virus” similar to the one the Brood used to control the Acanti. The Slaver Virus cripples the higher brain functions of its victims. The Brood used it to infect the Acanti, who lost their sense of self-awareness and all the higher functions of the brain, essentially becoming mindless slaves. [Uncanny X-Men #166]

The Slaver Virus’ deliberate functionality indicates a high-level of craftsmanship on the part of the Brood—as well as an advanced understanding of microbiology, neurobiology and xenophysiology—or it was simply a lucky find. Incidentally, this viral weapon was similar to another tool at the Brood’s disposal: the Nanites. The Brood made use of this nanotechnology during its alliance with the Badoon.

Microscopic robots that operated on the cellular level, the Nanites allowed the Brood and the Badoon to alter the behaviors and inhibit the superpowers of the heroes of Earth. In a way, this technology was the polar opposite of the Slaver Virus: whereas the Slaver Virus crippled brain functions but allowed the victim to retain access to its powers, the Nanites allowed the victim to retain its mind, but removed access to superhuman powers. The Nanites, a gift from the Badoon, were perhaps a new addition to the Brood arsenal that complemented their Slaver Virus. Regardless, the Nanites likely ended up in Brood possession after that alliance, as the Brood eventually betrayed the Badoon as punishment for their failure. [Contest of Champions II]

That leads into another useful feature of the Brood: each individual retains the abilities and genetic potential of its host. Additionally, with the sole exception of the Brood Firstborn, each individual Brood can usually switch back and forth between its Brood and host form. [Uncanny X-Men #232-234, X-Men vs. the Brood: Day of Wrath]

It is possible the Brood retains the fully intact minds of the organisms whose bodies they hijack. Were that confirmed to be the case, one could conclude that the Brood could feasibly absorb an entire species yet still retain access to the operating manual for that species’ technologies. This leads to a disturbing conclusion: the Brood never had to invent a way to get off its indigenous planet, because eventually, alien life capable of interstellar travel would have come to it. Once a ship landed, the Brood could have assimilated its pilots, commandeered the ship and departed to raid the galaxy. This is how Grand Admiral Devros, the Brood King of the Absolom Sector, planned on escaping the Absolom Sector planet on which he was stranded. [Untold Legend of Captain Marvel #1-3]

Since its only goal is proliferation of its own species, it follows the Brood would spread out as much as possible to ensure its overall survival, should something happen to its Nest World. Therefore, it comes as no surprise that at one point, the Brood reportedly inhabited hundreds of planets throughout the universe. [X-Men vs. Brood #1]

The Brood used the enslaved Acanti to catalyze the colonization of new planets. After loading up the oldest Acanti prisoner with Brood, the Brood would crash the living starship onto the surface of a planet and live off its carcass while it raided the planet for food, supplies and host bodies. The Brood colonized the planet the X-Men refer to as “Sleazeworld” using this method. [Uncanny X-Men #162, 166] 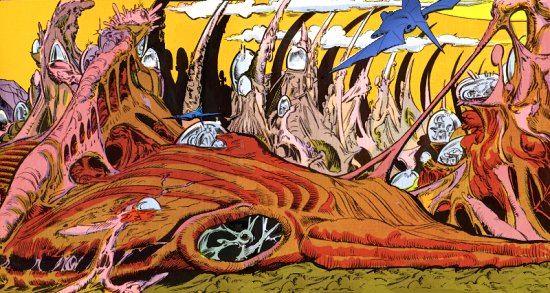 Aside from Sleazeworld—the third planet from its solar system’s sun—the Brood also occupied an unnamed planet in the Absolom Sector on which members of the Kree could live and breathe freely, and even made several attempts to colonize Earth. Judging by its choice of host planets, the Brood appears to prefer an atmosphere similar to Earth’s. However, the Brood does not shy away from extreme conditions; it successfully modified Madrizar—a planet similar to the Milky Way’s Pluto in its distance to the nearest star—to its liking. The Brood made Madrizar habitable by drilling enormous shafts down to the planet’s geo-thermal core and heating up its atmosphere, making the air breathable in the process. That way, the Brood Huntsmen could live there while they used the planet as a base for hunting the Acanti. [Uncanny X-Men #166]

There is no way of knowing how much of its technology, if any, the Brood developed itself. Nevertheless, the Brood uses the technology it has to enslave species and occupy foreign planets, obtaining new technology from these enslaved species in turn.