Infection with a Brood egg almost always means one thing: transformation into one of the monstrous creatures and assimilation into their ever-expanding hive. After the Brood infection was purged from Ghost Rider’s body in X-Men (2nd series) #9, it was said “for what may be the only time in the history of the universe, a living being other than an X-Man has escaped the ravages of a Brood transconfiguration!” While still largely true, a few beings other than X-Men, ranging from human to Shi’Ar to Kree, have emerged from Brood impregnation relatively unscathed.

Charles Xavier – After the Brood Queen discretely implanted him with a Queen embryo Xavier returned to Earth, initially unaware anything was wrong. However, the Brood within slowly began to infiltrate his body and eventually took complete control. By the time the X-Men returned to help, the damage to his body was complete; Xavier’s body would never be rid of the Brood parasite. Instead of curing his existing body, Dr. Moira MacTaggert and Sikorsky, an ally of the Starjammers, cloned a new body from a cell sample of Xavier’s collected before his infection, then transferred his consciousness into this unaffected vessel.
Infected: Off-panel between Uncanny X-Men #155 and #156
Cured: Uncanny X-Men #167 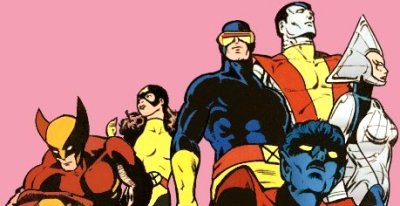 Cyclops, Colossus, Lilandra Neramani, Nightcrawler, Sprite – The Brood Queen impregnated each of these X-Men, along with their ally Lilandra, with a Brood embryo after Lilandra’s sister, Deathbird, apprehended them. The embryos gestated for some time, but just as they reached their points of total Brood expression, the Acanti singer-soul broke free and purged the infection from all of their bodies.
Infected: Between Uncanny X-Men #161 and 162
Cured: Uncanny X-Men #166 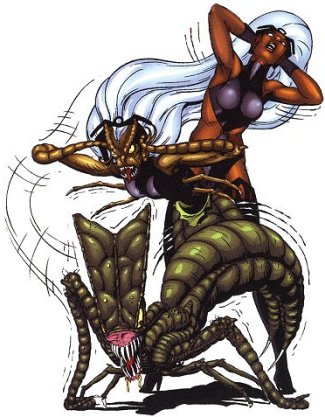 Storm – Storm was infected by the same Brood Queen who infected the rest of the X-Men, but she dealt with it differently. Because she was so in-tune with her body, Storm discovered her infection before the others and, after much debate, decided she would rather kill both herself and the embryo instead of letting it gain control. While in the vacuum of space, she absorbed a lethal amount of cosmic energy and died instantly. Coincidentally, a prematurely birthed Acanti-prophet singer happened to be nearby and, needing a foreign consciousness to serve as its own, it engulfed Storm’s body and slowly mended its injuries. Storm fully recovered later after the liberated Acanti singer-soul repaired the rest of her body’s damage.
Infected: Between Uncanny X-Men #161 and #162, as depicted in a flashback in #162
Cured: Uncanny X-Men #166

Ghost Rider – After infiltrating the Assassins Guild of New Orleans, the Brood lured Ghost Rider into a trap and infected him with an embryo, which took control of his body almost immediately. After the X-Men arrived, Psylocke used her psi-knife to enter Ghost Rider’s consciousness at which point she severed the mental link between the Ghost Rider’s host, Daniel Ketch, and his Brood parasite. Bella Donna Boudreaux, also in the Astral Plane, subsequently destroyed the separated mind of the Brood, ridding Ghost Rider of its influence.
Infected: Ghost Rider (2nd series) #26
Cured: X-Men (2nd series) #9

Hannah Connover – Hannah was never truly cured of her Brood infection, but managed to prevent it from overtaking her body. The wife of Glory Day Minister William Connover, Hannah was tricked into taking a cure for her arthritis by a Brood-infected paramedic named Josey Thomas. Hannah acted as a Brood sleeper agent for years afterward, infecting several members of her husband’s congregation under the guise of offering them a miracle cure. The influence of the Brood eventually became too much for her to bear and she began her transformation. However, through some undefined circumstance, her body managed to resist complete assimilation into the Brood long enough for Iceman to cryogenically freeze and preserve her body. Hannah Connover is the only baseline human to withstand Brood infection.
Infected: Uncanny X-Men #234
Cured: Never truly cured, but cryogenically frozen in X-Men vs. the Brood: Day of Wrath #2

Mimic (Exiles) – After being stranded on a world overrun by Brood for four years, Mimic was implanted with a Brood embryo. He managed to stave off total assimilation twice using the half-rate healing factor he copied from Wolverine but, because he was in a weakened state during his third infection, he inadvertently allowed the embryo to hatch and take control of his body. His fellow Exiles, with the help of alternate-reality versions of Tony Stark, Otto Octavius and the Fantastic Four, sedated Mimic’s body long enough for his enhanced immune system to purge the Brood influence from his body.
Infected: Between Exiles #32 and 35
Cured: Exiles #37

Mar-Vell, Una, Colonel Yon-Rogg – While on a rescue mission in the Absolom Sector, Kree-hero Mar-Vell and his entire crew, including his medic Una and the abrasive Colonel Yon-Rogg, were ambushed by the Brood-infected Grand Admiral Devros and infected by that colony’s Queen. Mar-Vell escaped with Una and the two infiltrated the Brood lair. While Mar-Vell defeated the colony’s leader Devros, the resourceful Una modified an omni-wave projector to emit a specific frequency of radiation lethal to the Brood and used it to destroy the embryos within their bodies. Despite their mutual enmity Mar-Vell returned to the planet’s surface and rescued Yon-Rogg just as his ship left the planet’s atmosphere. Yon-Rogg was carried aboard the ship at the last second, and cured by Una’s Brood-killing machine.
Infected: The Untold Legend of Captain Marvel #2
Cured: The Untold Legend of Captain Marvel #3