By definition, the Brood is a collective entity. It disdains individuality and its ultimate goal is assimilation of all life into itself. As the Brood Empress told her rebellious underling Hannah Connover, “...individually, we do not matter. That we as the Brood— as our race — live on matters. These thoughts of self, of freedom, of individual choice—these are not acceptable! The very concepts are anathema!” However, even with this rigid philosophy, several members of the Brood stand out as individuals.

All appearances: The Untold Legend of Captain Marvel #2
Cause of death: Shot by Mar-Vell
Admiral Devros considered the Brood Queen of the Absolom sector (who infected him) to be his queen and mate.

The Brood King / Grand Admiral Devros
All appearances: The Untold Legend of Captain Marvel #2-3
Cause of death: Slain by Mar-Vell
Devros fancied himself a “Brood King” instead of a Queen, a rare instance of a member of the Brood referring to itself by a male pronoun.

The Great Mother of Sleazeworld
All appearances: Uncanny X-Men #162-166, Ms. Marvel (2nd series) #22-24
Current status: Unknown
The first Brood Queen the X-Men ever encountered, this Queen of Sleazeworld infected the X-Men with Queen embryos, only to have them return and rebel. The fight was going in her favor until Binary unleashed the trapped Acanti Prophet-Singer soul, which judged the inhabitants of Sleazeworld and turned the Brood Queen into crystal. Somehow, she survived and made her way to Earth, where she sought to subvert the planet. Ms. Marvel, once again in control of her Binary powers, teamed up with Cru the Brood-hunter and defeated the Brood Queen by propelling her into space with a nuclear blast.

The Brood Imperiatrix
All appearances: Contest of Champions II #1-5
Current status: Unknown
This Brood Queen believed herself to be the one from Sleazeworld who supposedly survived the planet’s destruction. However, the appearance later on of the Great Mother from that planet contradicted the tale told here. She abandoned her scheme to absorb the powers of the superheroes of Earth after coming face-to-face with the bloodthirsty Carol Danvers and retreated into space.

New York City Brood Queen
All appearances: Ghost Rider (3rd series) #68
Cause of death: Molecular structure dismantled by Stacy Dolan’s special weapon
This particular Brood Queen came after the one from New Orleans. She acknowledged sharing the memories of her predecessors, which is why she sought out Ghost Rider and Gambit. They brought Wolverine, whose essence she had also tasted. Ultimately, she was defeated by the trio of heroes and their allies.

Criminal Colony Brood Queen
All appearances: Wolverine Annual 2000
Cause of death: Wolverine
This Brood colony was considered criminal, as it committed crimes for pleasure instead of reproduction. It was heavily implied that this Brood Queen was the Ulara, the wife of Tyrus Krill and that her primary Brood warriors were their children, Zet and Jexia. This Queen referred to her Brood as “brothers and sisters”, another rare instance of the Brood using male pronouns. This may be due to the fact that there was a familial relation between the Queen's host and her infected children.

Hannah Connover
All appearances: Uncanny X-Men #233-234, X-Men vs. the Brood: Day of Wrath #1-2
Current status: Unknown
Hannah Connover was a rare example of a host who was able to resist the Brood infection without the benefit of superhuman powers or technological intervention. She appeared to do so solely through the strength of her will and her intense faith in God. Hannah was considered a rogue Queen by the Brood Empress due to her refusal to assimilate. Hannah was placed in stasis by the X-Men while her human side was dominant and taken into their care until a means of removing her Brood nature could be discovered.

Fang
All Brood appearances: Uncanny X-Men #157, 162
Cause of death: Presumably the explosion of Sleazeworld
Formerly a member of the Shi’ar Imperial Guard, Fang defected to aid Deathbird and the Brood, who rewarded his treachery with forced assimilation into the colony.

No-Name
All appearances: Incredible Hulk (3rd series) #93-105, 107, World War Hulk #1-5, Heroes for Hire (3rd series) #11-15, World War Hulk Aftersmash: Warbound #1-5
Current status: Active on Earh, rendered infertile
No-Name was a member of the Brood colony the X-Men encountered on Sleazeworld. Along with six of her sisters, she survived the initial destruction of the planet while in the stomach of another creature and eventually landed on Planet Sakaar, where her sisters died in an arena battle— the same battle in which she joined up with Hulk. She joined his Warbound, gained her own sense of individual identity and adopted the name “No-Name”. While on Sakaar, No-Name mated with the insectoid alien Miek and birthed a crèche of hybrid offspring on Sakaar. However, she slaughtered them when she witnessed their savagery. She traveled with the Warbound to Earth, where she was due to deliver another crèche. She attempted to use Humbug, a member of the Heroes for Hire team as a host for her younglings. However, the insect hive-mind of Earth sought to thwart the birth of No-Name's children. The hive-mind rendered her infertile through her contact with Humbug, who was secretly acting on their behalf. No-Name and the rest of the Warbound were last seen battling the Leader in the desert of Nevada. Her current whereabouts are unknown.

Tyrus Krill
All appearances: Wolverine Annual 2000
Cause of death: Killed by Wolverine
Special abilities: Enhanced strength plus a wide arsenal of weaponry that includes a harpoon, guns, M’Zara Blood Flies, a sonic emitter specifically attuned to a frequency only the Brood can hear, and a device that masks his own Brood scent
Tyrus Krill became a notable bounty-hunter who specialized in Brood after his infection. He devised various means to delay his full transformation and to mask his Brood nature. He was mercy-killed by Wolverine after finally putting his family, who had also been infected by the Brood, to rest.

Josey Thomas
All appearances: Uncanny X-Men #232-234, X-Men vs. the Brood: Day of Wrath #1
Cause of death: Slain by the Brood Empress’s Firstborn
Josey was Harry Palmer’s EMT partner. Because she was not a mutant, Palmer kept her out of his Brood gang and instead allowed her to remain as a covert agent of the Brood. Although not technically a Queen, Josey implanted Hannah Connover with a Brood embryo.

Harry Palmer
All Brood appearances: Uncanny X-Men #232-234
Cause of death: Slain by Wolverine
An EMT from Denver, Colorado, Palmer was infected by the Brood after encountering a crashed Star Shark in New Mexico. While not technically a Brood Queen, Harry Palmer created his own gang of Brood in Denver. Palmer specifically sought mutants to infect due to their added genetic potential.

The following Brood warriors have also been seen and given individual names. Though they all appear to be regular Brood warriors, some have been given particular roles within the Brood hive as noted. D'zilos - assistant to the Brood's scholars; killed by Wolverine - Appeared in: Uncanny X-Men #163

T'crilee - Hunt-Master of the Great Mother - Appeared in: Uncanny X-Men #164

Reverend William Connover
All Brood-related appearances: Uncanny X-Men #233-234, X-Men vs. the Brood: Day of Wrath #1-2
The husband of rogue Brood Queen Hannah Connover, William Connover’s inspirational message not only helped Wolverine stave off Brood transformation, but possibly helped delay his wife’s assimilation into the Brood. After Hannah was placed in stasis, he continued his ministry and became a leading mutant-rights activist.

Miek
All Brood-related appearances: Incredible Hulk (3rd series) #93-105, World War Hulk #1-5, Heroes for Hire (2nd series) #11-15, World War Hulk Aftersmash: Warbound #1-5
Powers: Super strength, armored body, and the ability to communicate with other beings through “chemming”, a use of the pheromones present in his body
Miek is a member of the native insectoid race of Sakaar. He and No-Name grew close while members of the Hulk’s Warbound and engaged in a sexual relationship, producing a litter of savage offspring that No-Name slaughtered. Miek and No-Name attempted to have more offspring once on Earth but these offspring were destroyed as well. Miek taken into S.H.I.E.L.D. captivity during the Skrull Invasion of Earth. His whereabouts since S.H.I.E.L.D. was taken over by H.A.M.M.E.R. are unknown.

Humbug
All Brood-related appearances: Heroes for Hire (2nd series) #10-15
Powers: initially wielded technological devices that enabled him to amplify insect noise to use as weapons and communicate with insects; subsequent power-up gave him superhuman strength, senses, speed, agility, and the ability to communicate with any insect on Earth
A former foe of Spider-Man’s, Humbug joined the most recent incarnation of Heroes for Hire in hopes of finding redemption. After he drank some insect blood as requested by the insects of the Savage Land, Humbug received a power-boost and became connected with the collective insect hive of Earth. Humbug was seduced by No-Name into becoming the bearer of her eggs and betrayed the Earth-hive. However, unbeknownst to No-Name, Humbug was unknowingly acting as the Earth-hive’s Trojan horse, which had foreseen his betrayal and poisoned his body. No-Name was rendered infertile by the Earth-hive agent that stole onto her ship inside Humbug’s costume. Consumed by the dying Brood hybrids implanted in him, Humbug was decapitated by his Heroes for Hire teammate, Shang-Chi. 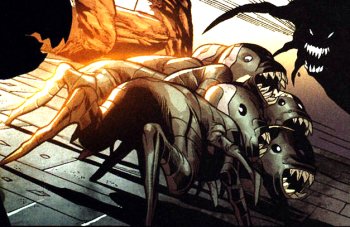 The Hybrids (No-Name and Miek’s offspring)
All appearances: World War Hulk Aftersmash: Warbound #4; Heroes for Hire #11-15
Cause of death: The first hatchlings were slaughtered by No-Name; her subsequent eggs were sabotaged by Earth's insect hive-mind through Humbug
No-Name and Miek's offspring are the first known case of the Brood reproducing via sexual reproduction. The Brood DNA appears to be dominant in No-Name and Miek’s “hybrids” or "hivelings". The offspring born on Skaar were brown-colored like their mother, had six tentacle-like legs with mandibles at the tips, and a long, ridged spine that extended into a tail. Their cranial structure seemed to be a trait inherited from their father’s people, the natives of Sakaar. Unlike their parent races they had glowing blue eyes. According to Miek, No-Name was forced to kill the hybrids while on Sakaar after she witnessed their savagery firsthand.

But No-Name tried again on Earth. She sought to give birth to more of these hybrid insectoids using the insect-controlling Humbug as a native incubator host. Her hope was that using an Earthling as an incubator would assist in her offspring's assimilation to their new home. Her plan was thwarted by the insect-hive of Earth and she was rendered infertile.