The Brood is governed by a supreme matriarchy, at the top of which sits the Brood Empress. The Brood reproduces asexually and therefore has no clear divisions of gender. Although the Brood lives by a caste system, some of the roles have proven to be flexible. 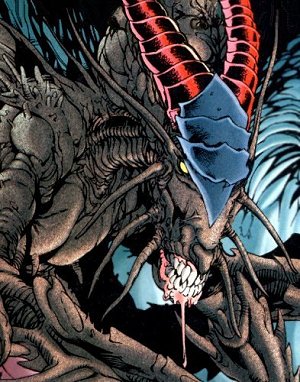 There is only one Brood Empress in the universe. As her name suggests, she is the top tier of the Brood caste system and exercises almost total control over her progeny, including determining which Brood become Queen and which remain Warrior-Prime. The planet on which the Empress lives is considered the Brood nest world, though whether the Brood originated on that planet is unknown.

The Brood Empress shares several physical characteristics with her offspring. She has large yellow eyes, a scaly brown hide, and a mouth full of razor-sharp teeth. However, she possesses several physical traits that distinguish her from all other Brood. While Warriors-Prime have forked skulls, the Brood Empress has two scarlet horns protruding from the top of her head, with an armor plate at their base. She also has eight whiskers, seemingly unique to her physiology. Jagged spikes protrude from every part of her body. In addition to being larger than her offspring, she also has a large ovipositor through which she lays eggs. Her relative size and degree of mobility are unknown. However, she possesses vast telepathic powers, through which she shares a mind-link with the entire Brood hive.

The Empress also has the power to induce a Warrior-Prime to become a Queen, should she so desire. This was first hinted at by Josey Thomas when she suggested to the Firstborn that maybe the Empress would realize she should have been Queen, and not Hannah Connover [X-Men vs. the Brood: Day of Wrath #1]. Thomas’ jealous statement indicates the Empress made some sort of decision regarding which host would become Queen. Therefore, it could not have been left solely to the discretion of her Brood.

Although she monitors the hive-mind of the Brood, the Empress cannot completely control the actions of her subordinates. When individual Brood rebel, she cannot telepathically force them to assimilate. In these scenarios, she has the renegade offspring destroyed with the help of her assassins, the Firstborn [X-Men vs. the Brood: Day of Wrath #1-2]. 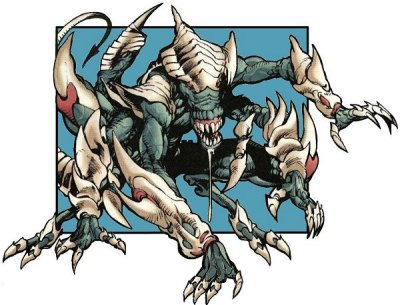 The most trusted agents of the Empress, the Firstborn exist solely to attack and destroy. The Empress births them herself and dispatches them to quell rebellious Brood Queens and other conflicts that require only fighters. Because they are not born of hosts, they do not possess the Warrior-Prime ability of concealing their appearance by shifting into their host-forms. For this reason, they are used not to subvert and infect, but merely to destroy. The transportation they use to travel to other planets dissolves upon reaching its destination, but this poses no problem, as the Firstborn are ordered to execute themselves upon completing their missions.

The Firstborn are larger than common Brood Warriors-Prime, and green instead of brown. They have six limbs: two sets of arms and one set of legs. They have a spear-tipped, prehensile tail, but unlike their Warrior-Prime sisters, they have no tentacles. They also have durable, spiked armor plating on their shoulders, fingertips, tails, elbows, forearms, knees, and, most prominently, on the crowns of their heads. They are extremely durable, disproportionately agile, and immensely strong. Unlike the Warriors-Prime, they do not have wings. However, through some other means, possibly technological, the Firstborn have the ability to teleport. Their teleportation abilities are likely restricted to relatively short distances, as the Firstborn travel over interstellar distances using other methods. The X-Men encountered this variety of Brood only once, when the Brood Empress dispatched her Firstborn to exterminate Hannah Connover, a defiant Brood Queen [X-Men vs. the Brood: Day of Wrath #1-2]. 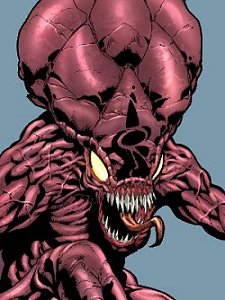 The Brood Queens lead individual Brood colonies, which usually encompass entire planets. They are capable of implanting eggs, of both the Warrior-Prime and Queen variety, into hosts. While some Queens impregnate their victims using their tentacles, the first Queen the X-Men encountered seemed to impregnate hosts using her tongue. Additionally, several Brood Warriors-Prime have been shown using their tongues to implant eggs into the necks of potential hosts. [Cable (2nd series) #19] The Queen’s tail does not function as an ovipositor, but a venom-filled stinger. The Brood Queens are much larger than their offspring. Their heads and thoraxes are relatively the same size, and they have the same amount of limbs as their daughters, but their abdomens are much larger, presumably because they require the capacity to carry eggs.

Brood Queens control which of their offspring become Warriors-Prime, and which become new Queens. For example, the Great Mother from Sleazeworld implanted the Shi’Ar warrior Fang with a Warrior-Prime embryo, but implanted the rest of the X-Men with Queen embryos, a discrepancy that suggests a certain amount of control on the Queen’s end [Uncanny X-Men #162]. 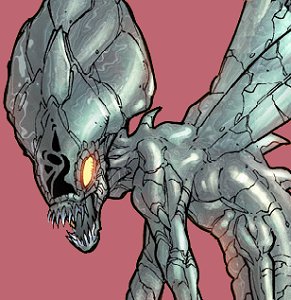 The Brood Empress can retroactively boost Warriors-Prime to the level of Queen. For example, Josey Thomas implanted Hannah Connover with a Brood embryo with the intention of making her into yet another Warrior-Prime. Immediately after her impregnation, however, Hannah Connover immediately became aware of her being Brood. According to Josey, most vessels do not have such immediate awareness; this marked Connover as a potential Queen. Josey’s reaction implied she did not intend to make Hannah into a Queen, and furthermore, she would not have made Hannah into a Queen if she wanted the role for herself. [X-Men vs. the Brood: Day of Wrath #1]

Surprisingly, the ability of an individual Brood to lay eggs does not necessarily make it a Queen. Several Warriors-Prime have been known to implant eggs in other hosts. For example, both Harry Palmer and Josey Thomas, the Brood-infected EMTs from Denver, impregnated other humans with Brood eggs, yet neither Brood host considered itself a Queen [Uncanny X-Men #233, X-Men vs. the Brood: Day of Wrath #1]. This fluidity in the Brood caste system suggests the hierarchy is not as rigid as it initially appears. 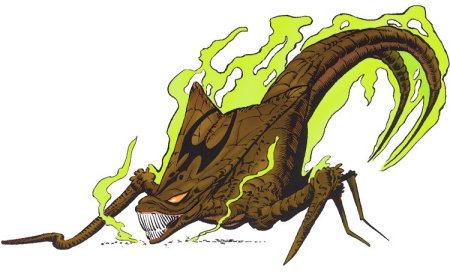 As the bottom level of the Brood caste system, the Warriors-Prime are the most common of the Brood. They do all the labor and most of the fighting, and are organized into several different roles, among them Weaponeer, Clan-Master, Hunt-Master, Huntsmen, Tech Handlers, and Scholars. The most typical Brood, they resemble large insects and can vary in size. They generally retain the size of their hosts. Their hides are brown and covered in armored scales. Their bodies consist of three sections: a head, a thorax, and an abdomen. The forked crowns of their heads extend backward, well over the length of the thorax. Each Brood has a unique black figure on its forehead, almost like a birthmark or a fingerprint. They have large, yellow eyes on both sides of their heads, large mouths, and one row of spiky teeth on the top and bottom of the jaw. Each Brood has six limbs; two tentacles that function as forearms and two rear sets of jointed limbs. Their tentacles are dexterous enough to fire weapons and pilot ships. The Brood Warriors-Prime also have wings, and fly as a primary means of travel. Their abdomens taper into a two-pronged, functional stinger.

The most common method of creating Brood is through infection of a host, and this is how all Warriors-Prime are birthed. The Brood lays its eggs at the back of the necks of its victims since everything the eggs need to gestate, including all 31 nerve segments and access to the carotid and vertebral arteries, rests at the top of the spinal column. [Cable (2nd series) #19]. After a Queen implants her eggs into a host, the egg splices itself to the host’s nervous system and rewrites its DNA into that of Brood. Upon the egg’s hatching, the host undergoes transformation into a Brood Warrior-Prime. The Warrior-Prime retains the genetic memory of its host, enabling it to access the host’s personality, access any of the abilities contained in the host’s genetic code, and even revert to its host body when it needs to conceal itself. It can also use a transitional form between the Brood and the host, giving it access to the best abilities from each form [Uncanny X-Men #164].

As previously noted, several Warriors-Prime have shown the ability to implant others with Brood embryos. Both Josey Thomas and Harry Palmer infected several people with Brood embryos yet were not Queens. After Palmer and his Brood captured Storm, he remarked he would make her into their Queen, instead of simply making her a Warrior-Prime like he did Wolverine [Uncanny X-Men #233]. This statement not only implied that Palmer was not the Queen, but that the colony had no Queen at all, despite having the ability to reproduce. [X-Men vs. the Brood: Day of Wrath #1].

While the Queens bear the primary honor of reproduction, Warriors-Prime are not necessarily infertile. No-Name, the Brood Warrior-Prime from Hulk’s Warbound, produced a batch of offspring through sexual reproduction. After being completely separated from her hive, No-Name gained a sense of individual identity and had a sexual awakening, which culminated in her seduction of the alien Miek and birthing her own nest of hybrid offspring [Warbound #4]. Warriors-Prime, therefore, are not infertile. Under certain conditions they can reproduce and pass on their genetic legacy.