While investigating the Apocalypse Twin’s Akkaba cult for clues, Alex was attacked by a surprising foe, the original Banshee. Resurrected by the Twins as a Horseman of Death, the 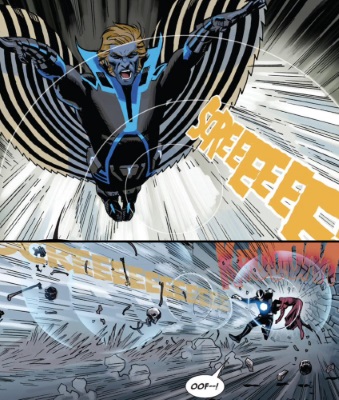 former X-Man showed a murderous hate for the Summers brothers, due to being killed by one and another killing his friend Professor X. However, he restrained himself to simply kidnapping the Scarlet Witch right out of Alex’s arms. Reduced to three members in his team, Alex led the Wasp and Captain America on an assault on the twins, flirting with Janet during the mission and expressing concern for her wellbeing.

While fighting desperately against all odds, Alex’s team’s efforts were futile and the Twins enacted their master plan. Using the Scarlet Witch, every member of mutant kind, Havok included, were teleported into to the Twin’s spacecraft, an ark that would carry them to a new world. They then enacted the horrifying second stage to their plan, drawing a Celestial to Earth. Their plan succeeded and the arriving Celestial destroyed the Earth and killed the seven billion humans still there. [Uncanny Avengers (1st series) #10-17]

With Uriel killed, Eimin alone took the mutants to Planet X. Knowing many of them wouldn’t follow her, she twisted the facts to blame the Avengers for the Earth’s destruction. Alex and Janet, who

had been present on Eimin’s ship when the Earth was destroyed, were forced into hiding. The pair spent six years in hiding together from the rest of mutant kind, while fighting to travel back in time and save Earth. During this time, the pair fell in love, married and raised a human daughter named Katie. Their opportunity to save the Earth came from a surprising source in Kang the Conqueror. Ultimately though, Alex couldn’t bring himself to do it because it would erase Katie from existence. Kang, however, forced his hand by abducting Katie and promised to return her when Alex and the surviving members of the unity squad rewrote history.

Working alongside Kang’s assembled team of time displaced rogues, Alex and the Wasp were 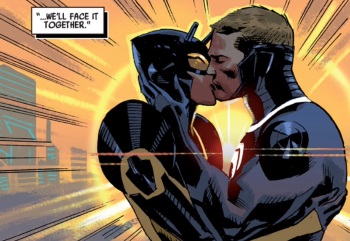 brought into conflict with his brother, the X-Men and the Brotherhood. While battling his friends and family, he managed to convince his brother and the X-Men to side with him against the Brotherhood, allowing him the time to rescue the surviving Unity Squad members. After one last embrace with his wife, Alex and the others had their consciousness thrown back in time by Kang to a point just before Earth’s destruction. [Uncanny Avengers (1st series) #18-20]

Successfully travelling back in time, Alex and the Unity Squad were able to save their fallen members, prevent the mutant rapture and driving the Celestial away from the Earth. However 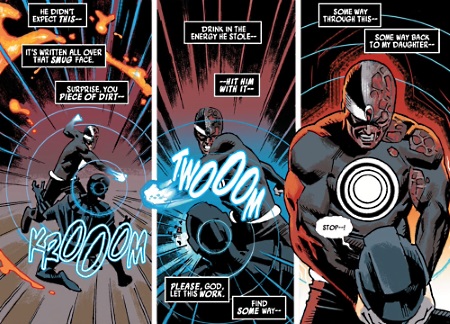 Kang betrayed them and stole the Celestial’s energy from himself. With no other choice, Alex absorbed the Celestial’s energy as well and fought against Kang to stop him. However, when Kang told him he had to choose between the universe and the life of his daughter, Alex had to make an impossible choice. Ultimately, though, he decided those weren’t his only options; he would save Katie himself. During the fight, the left side of his face was severely burned by raw, cosmic energy. Despite this, he quickly gained the upper hand. Unfortunately, before he could force Kang to deliver him Katie, the supervillain fled, threatening that Alex would never see his daughter again. Later, when he had to break the news to his wife Janet, the pair broke down and grieved for their loss. [Uncanny Avengers (1st series) #21-22]

Due to his extensive injuries, Havok spent the next two weeks recovering in a stasis tube. Unfortunately though, his body continually rejected skin grafts, leaving him permanently 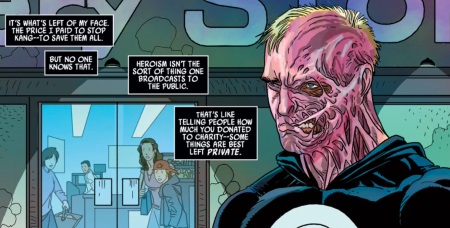 disfigured. Upon awakening from the tube, he and Janet reconnected, confirming that, despite having erased their future together, they still shared the memories and loved each other very much. Though they still struggled to move on from their lost daughter Katie, the time travelling Immortus offered them a glimmer of hope. If they conceived at the right time, they would get their daughter back. [Uncanny Avengers (1st series) #23]

Alex struggled with his disfigurement but was thankful that he still had Janet’s love. While buying some groceries, he was ambushed by the Red Skull’s S-Men and kidnapped. He awoke in the Red Skull’s mutant camps on Genosha alongside Rogue, Magneto and the Scarlet Witch. While the Avengers were mentally dominated by the Skull, Magneto was immune due to his helmet and used that freedom by slaughtering the S-Men and the Red Skull himself. Unfortunately, killing the Skull made things worse as the act unleashed a powerful entity known as the Red Onslaught. [Uncanny Avengers (1st series) #24-25]

The Red Onslaught unleashed a wave of irrational rage around the world, which among many others Havok fell prey to. Havok first attacked Magneto, then upon discovering his brother Scott was also a prisoner on Genosha, he attacked him as well. While the pair fought briefly, Scott’s diving in front of a spear meant for Alex was enough to shake him free of the Red Onslaught’s influence. With the X-Men’s sudden arrival, the brothers were reminded that they were family and started to reconnect. [Avengers & X-Men: Axis #1]

Together with the Avengers and Inhumans, the X-Men attacked Red Skull, only to be countered by a pair of the Skull’s adamantium sentinels. Even with the surprise addition of several villains to their numbers, the heroes were only able to succeed through a spell cast by Doctor Strange and the Scarlet Witch to invert the Red Skull’s personality and bring Xavier’s mind to the forefront. Unfortunately, the spell had the unintended consequence of inverting the personalities of everyone present, including Havok.

Where once he was calm and rational, Alex was now hotheaded and untrusting. While the 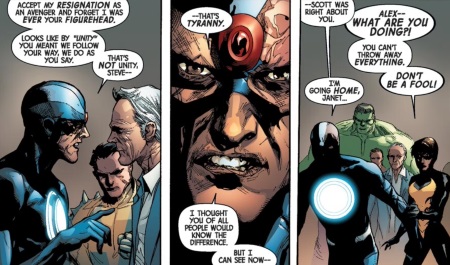 Avengers wanted to take the unconscious Red Skull back to Avengers Tower, the X-Men (Havok included) wanted to keep him, hoping that Xavier’s mind was now in control. While Alex eventually allowed Steve Rogers to take the Skull, he followed this up by angrily quitting the Avengers and leaving with the X-Men. Janet pleaded with him to stay but he angrily lashed out at her and the pair bitterly parted ways. [Avengers & X-Men: Axis #2-3]

Back with the X-Men, the inverted mutants fell under the sway of the newly risen Apocalypse and attacked the Avengers. Upon discovering the inverted Avengers had forcibly restrained the Wasp and stolen her Pym particles, Alex was enraged that they could do such a thing to his wife. He freed her and took her with him, only to restrain her in Apocalypse’s ship.

The X-Men and Apocalypse concocted a plan to detonate a gene bomb that would kill all the humans on Earth. Though Havok had hoped they could spare Janet’s life, he was willing to sacrifice her for their cause. Learning of Apocalypse’s plans, the Avengers attacked to stop the bomb and the two groups fought brutally. Ultimately, Carnage sacrificed his life to stop the bomb. During the melee, Havok freed Janet and lied to her, telling her it was he who stopped the gene bomb. After quickly realizing Alex was lying and that he’d been willing to let her die, she blasted him and fled. 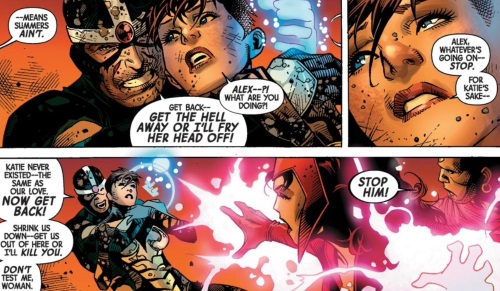 With the inversion about to be undone, Havok panicked, realizing he couldn’t live with himself knowing what he had done. He frantically tried to stop the reversion spell but failed, only to be shielded by the inverted Iron Man, who also refused to have his inversion undone. When the others realized he was still inverted, Havok took Wasp hostage to force her to help him escape. She begged him to stop, for Katie’s sake, but Havok dismissed her and their love, claiming it never existed. She complied and shrunk the man, helping him escape. Havok later went to join with his brother’s more militant branch of the X-Men. [Avengers & X-Men: Axis #4-9]

​How long Havok remained with his brother's X-Men is unknown. He was next seen at Scott's funeral, after the man had seemingly died facing down the Inhuman King Black Bolt.  Both groups had clashed over the Terrigen Clouds, which were killing mutants, and Cyclops destroyed one of them, insulting the Inhumans. Black Bolt seemingly killed Cyclops during their final confrontation. At the funeral, Havok refused to beleive his brother would give up so easily and confronted Emma Frost. His feelings were justified, as Emma revealled that Scott had died during their first enounter with the Terrigen Cloud, and she had faked all his appearances after this. [Death of X #1-4]

​Seemingly still under the influence of the inversion Havok stood by Emma and supported her in her plan for vengeance agains the Inhumans. Despite her deception, Havok felt like he owed it to his brother to support her.  When the Inhuman's Terrigen Cloud was about to reach saturation 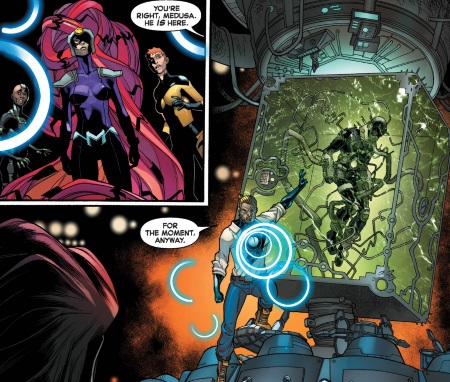 point in the atmosphere, driving mutants off-world permanantly, Emma enacted her plan.  The X-Men launched a premptive attack against the Inhuman's capturing their Royal Family.

Havok acted as guard keeper of the Inhuman King Black bolt and was brought face to face with Queen Medusa and the rest of the royal family when they came to his rescue.  While Havok threatened to kill Black Bolt he ultimately couldn't go through with the act and released his prisoner.  He also told Medusa this had never been about Terrigen, not to Emma at least, this had always been about her revenge.

While Alex claimed he saved Emma purely out of respect for Scott, and did not support her cause against the Inhumans, he was swayed to her side in another cause: protecting mutankind.  When 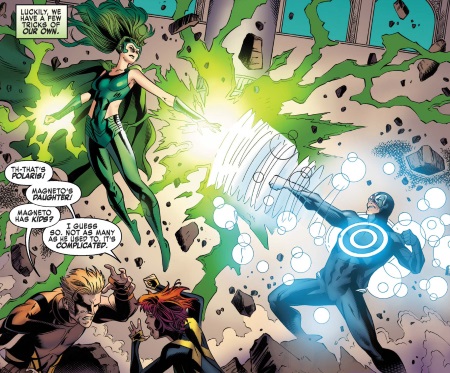 Hydra took over the United States, lead by a corrupted Captain America, Emma negotiated a sovereign nation for mutantkind, named New Tian, with Havok by her side.  Havok acted as Emma's enforcer, quelling insurrection in order to maintain the truce with Hydra. This brought him into conflict with his former flame Polaris, who had come to New Tian to free some of his prisoners.  Polaris was saddened by how far her former love had fallen from grace, and after defeating him vowed she wouldn't give up on him.

​Havok's current wherabouts are unknown.  Emphasizing how far he had fallen to the dark side, he was last seen forming an alliance with Emma, Miss Sinister and Bastion, with the goal of producing a powerful drug to enhance mutant abilities. [X-Men: Blue #7-9]