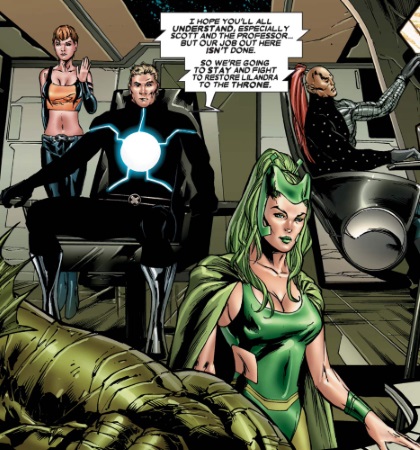 For months, Havok lead the Starjammers alongside Lilandra’s forces in a civil war. His victories and strategies even won him the admiration of Major General Ka’Arduum. Despite this, he still felt inadequate in comparison to his father and brother Cyclops. During a battle in orbit over Feather’s Edge, Vulcan’s forces were attacked by a third party; the Scy’ar Tal. This new enemy was surprisingly powerful, with an intense hatred of the Shi’ar. In order to kill the Shi’ar forces present, they literally dropped a sun on Feather’s Edge and Havok could only watch helplessly as the populated planet was destroyed.

Deciding the Scy’ar Tal were too dangerous, Havok instead made a surprising truce with Vulcan to take the aliens down. Not a fool though, Alex fully realized Vulcan would betray them and resolved that he would have to kill him first; something he recognized Cyclops would never do. Havok formulated a plan for the attack; his Starjammers would attack the Scy’ar Tal’s superweapon, Finality, while Lilandra and Ka’Arduum’s fleet fought off the enemy fleet.

Havok, Vulcan and the Imperial Guard attacked the Scy’ar Tal’s extremely powerful leader the Eldest together at Finality and managed to kill him. While he had anticipated the betrayal, Alex was still too slow to prevent Vulcan from blasting him into a star below and using Finality to 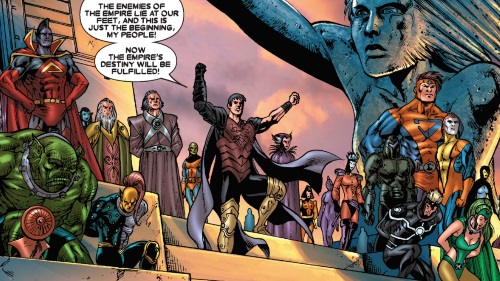 destroy the Scy’ar Tal. Fortunately, though, Havok’s abilities allowed him to absorb the vast energies of the star, supercharging him. Though he managed to use this power to beat Vulcan to a pulp, his evil brother had also sent his Guardsmen after the Starjammers, capturing Polaris, Ch’od and Raza. With his crew as hostages, he was unable to kill Vulcan, though he did manage one small victory; he destroyed Finality, preventing his brother from ever using it again. Unfortunately, he and his crew were now prisoners of Vulcan. [X-Men: Emperor Vulcan#1-5]

Vulcan locked Havok and the others away in the Kr’kn prison, an undersea facility twenty miles beneath the surface of the ocean. With no light, Alex had no access to the cosmic energies that charged his abilities. Trapped, he was forced to listen to his teammates’ tortured screams while his brother regularly tortured him by video. On one occasion, Vulcan delighted in tormenting Alex 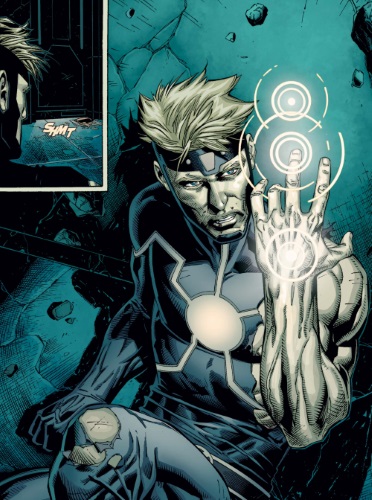 with news of what was taking place on Earth. He told him how a new mutant baby had been born, starting a serious of events that lead to Charles Xavier’s death and the disbanding of the X-Men. This was a mistake on Vulcan’s part, as Alex seized upon the news of the new mutant’s birth. This gave him hope and the strength to fight on. [X-Men: Divided We Stand #1]

With his newfound resilience, Havok resisted all of his brother’s various physical and psychological tortures. Every day, as his food was delivered through a small flap, he received a brief dose of light from the outside. Over time, he managed to build up enough charge to blast his way out of his cell and free his teammates. Still, they were stuck at the bottom of the ocean with no way out… until Lilandra, Korvus and Rachel came to rescue them.

Unfortunately, the group was quickly followed by Vulcan, the Imperial Guard and Vulcan’s new Praetorian Guard. Havok’s group were outmatched and, to make matters worse, they lost Raza to a symbiote Praetorian. The tide turned when one of the Praetorians, the Hodinn, came too close to Alex. As a living star, Havok was able to siphon the alien’s powers, becoming super charged. With that power boost, he was able to beat Vulcan badly. However, before he could finish off his 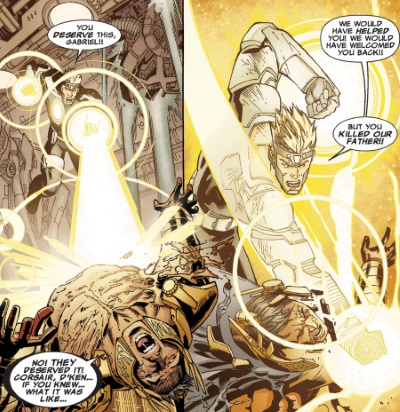 brother, he was teleported out by Lilandra. This near miss angered Alex greatly, but Lilandra was playing the long game. If they died there, which was likely, they couldn’t save the empire. [X-Men: Kingbreaker #1-4]

The Starjammers immediately rocketed towards Kree space, with the Shi’ar hot on their tales. The Inhumans had recently taken over the Kree and Lorna’s former sister in law Crystal was marrying the Kree’s Ronan the Accuser to consolidate power. No friends to the Shi’ar, the Inhumans had made an enemy of Vulcan during their quick rise to power and Havok hoped to form an alliance. Vulcan made the first strikes of war by launching an attack on the wedding. Havok could only watch on helplessly as the Imperial Guard kidnapped Lilandra. [War of Kings #1]

The Starjammers immediately began hunting for Lilandra with a contingent of Inhuman Elites. They managed to seize control of a Shi’ar Ionclad destroyer, through which they learned the 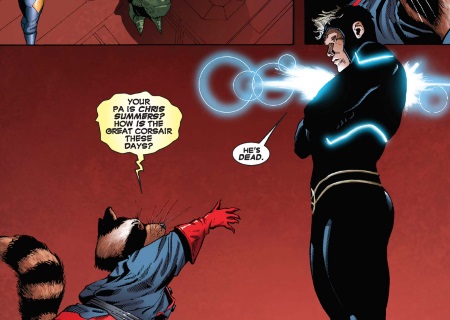 Majestrix’s precise location. Using the seized Ionclad, they shadowed the Shi’ar fleet, waiting for their time to strike. While shadowing the fleet, they rescued the Guardians of the Galaxy, who had come to mediate a truce but wound up stranded in space. With their cover blown, Havok decided to destroy the Ionclad and blasted off with the Guardians in the Starjammer Next stop, Lilandra. [War of Kings #1-2, Guardians of the Galaxy (2nd series) #13]

With the help of the Guardians, Havok lead the teams in an assault on the Shi’ar vessel holding Lilandra. While the rest held off Gladiator and the Imperial Guard, Havok and Lorna fought their way through to the empress. In a surprising twist, Gladiator turned on the Imperial Guard and helped them escape. With the help of Gladiator and the Guardians, Havok lead the group to Chandilar, throneworld of the Shi’ar. However, while marching Lilandra through the capital to reclaim her throne, they were attacked a number of times. Amongst the chaos, Alex was unable to stop Lilandra from being shot and killed. [War of Kings #3-4]

Rachel managed to spot the disguised attacker, a member of the Fraternity of Raptors, and with the X-woman guiding them Havok and the others furiously hunted the killer. Unfortunately, due to 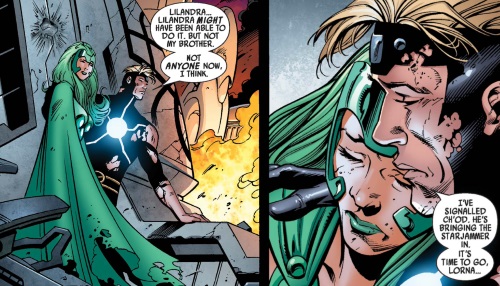 interference from the Shi’ar military, the killer escaped. Enraged by Lilandra’s death, Gladiator tore his way through the capital to the Council, with Havok and the Starjammers fighting along behind him. Upon slaughtering the secret order that had arranged the coup, Gladiator was praised by the Shi’ar people. Meanwhile, in deep space, Vulcan fought with Black Bolt, leader of the Inhumans and both were killed in a massive explosion, which resulting in the Shi’ar surrendering to the Kree. While Alex didn’t kill his brother himself, for him it was finally over. [War of Kings #5-6, War of Kings: Ascension #4]

With both Lilandra and Vulcan dead, there was no one left to lead the Shi’ar. Havok, who had fought so hard to save the Shi’ar, was invested in finding a good leader. Together with Lorna and Rachel, he tried to convince Gladiator to take on the role of Majestor but the grieving Praetor didn’t want to hear it. Alex and his crew attended Lilandra’s funeral to pay their respects. Following the funeral, the Gladiator was appointed Majestor of the Shi’ar by the Inhumans and this time he accepted. [War of Kings: Who Will Rule?]

With the war over and Vulcan dead, Havok and the others decided it was time to go home. Saying their goodbyes to Raza and Ch’od, Alex, Lorna, Rachel and Korvus took a ship and started the journey to Earth. During the trip, they picked up a distress signal from the Shi’ar space station, Gul Damar, and walked right into the middle of a civil war between the Shi’ar and their former slaves, the Grad Nan Holt. In actual fact, both sides were being manipulated by a powerful and unhinged Grad Nan Holt telepath named Friendless. Friendless immediately took control of Havok, Polaris and Korvus, and shut down Rachel’s mind, but not before she managed to send a psychic distress call out. 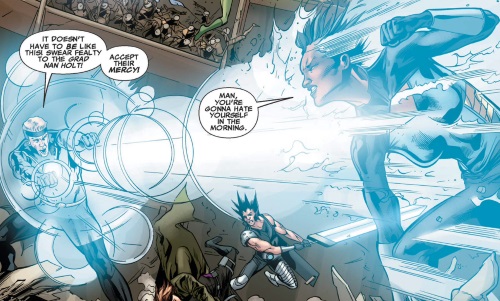 The mind-controlled trio became enforcers for the Grad Nan Holt, helping them fight the Shi’ar. The escalating civil war caused serious damage to the space station, resulting in it slowly sinking towards the sun. Though Rachel’s distress signal drew the X-Men to their aid, the mind control was too strong and Havok and the others fought their friends until a revived Rachel managed to break the control. While Havok was surprised to find Magneto and Frenzy amongst his rescuers, he nevertheless fought alongside them as Rogue enacted a plan to bring them all home. Upon finally arriving home, Alex was further surprised to learn the X-Men had moved to the west coast. [X-Men Legacy (1st series) #254-258]