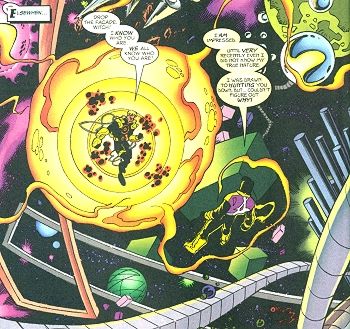 Later, during a three-way battle with the Avengers and the Canadian Super Soldiers, Captain America went insane and manifested tremendous energy powers, as he was actually linked to the Beyonder. The resulting battle between he and Havok incinerated the Avengers and even destroyed the moon. Cap was defeated and the X-Men escaped the moon, but the energy backlash unleashed the Beyonder from deep within the Earth.

In the resulting conflict, Doctor Strange and the Defenders arrived to aid Havok and Alex learned that he had become the living host of the Nexus of All Realities. 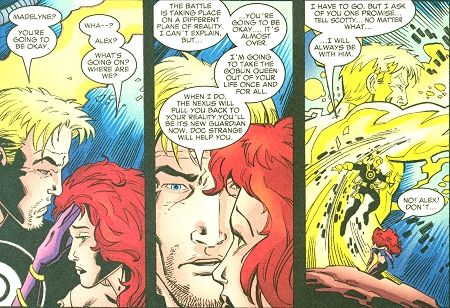 Tapping into this wellspring of power, Havok managed to defeat the Beyonder and the returning Goblyn Force. As a result of the battle, however, he was once more trapped in the eternal blackness between dimensional space. [Mutant X Annual 2001, #32]

Unsuspected by anyone, Alex’s body somehow had survived the plane explosion and was taken to hospital. Completely catatonic, he was registered as John Doe and soon transferred to Rosy Manor in upstate New York, a convalescent hospital for homeless, unidentified patients that have been warded to the state. There, nurse Annie Ghazikhanian took a special liking to him and made him her special case. Annie went out of

her way and tried to reach out to the handsome man in every way she could, like trying different languages and taking him along in a wheelchair while spending some time with her son, Carter. Alex never responded but Annie fell in love with him anyway. About a year after she had been his nurse, she read a newspaper article about Xavier’s school in Westchester and recognized him from a photograph printed next to it. Immediately, she called the school and Scott soon came to pick up his brother. Annie did not want to leave Alex and, despite Scott informing her that Alex was in love with someone else before his accident, she asked to come along and was offered to become the school nurse. [Uncanny X-Men (1st series) #411-412] 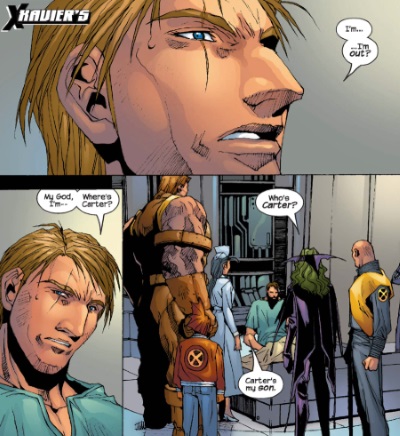 Once in Westchester, Xavier tried to probe Alex‘ mind but only found a strange red line of light, leading into a black void. The professor sensed that Havok’s consciousness was on the other end of that line but he didn’t dare to enter the void, as he sensed that whatever was inside it caused pain and great fear. [Uncanny X-Men (1st series) #413]

This, however, didn’t stop Annie’s son, Carter, a mutant himself with telepathic and telekinetic powers. Sensing the same light while visiting his mother in the mansion’s infirmary, he entered Alex’s head before Annie could stop him. Carter ventured into the void and managed to pull Alex out, only to end up stuck there himself. As soon as Alex came around, he urged Xavier to rescue his savior and, although very straining, Xavier managed to pull the boy back. [Uncanny X-Men (1st series) #418-420]

When Alex was informed of all the tragedies that had occurred in his absence, like the attacks on the World Trade Center, the slaughtering on Genosha and Colossus‘ 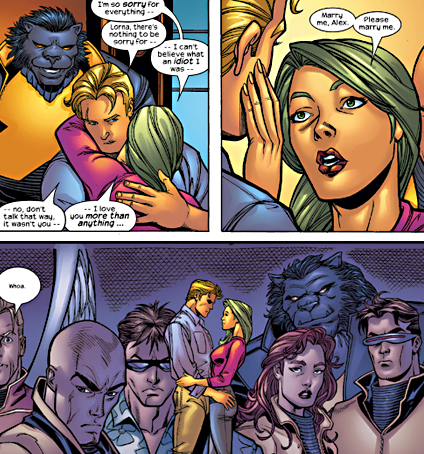 noble sacrifice, his mood was somewhat depressed, but still the other X-Men were overjoyed to have him back. Polaris was more than happy and, although being somewhat unstable ever after having seen the slaughter on Genosha, she expressed her regret over the way they had ended their relationship and asked Alex to marry her. Alex didn’t actually say yes, though everyone else seemed to take his answer for granted and the team now looks forward to the wedding, while Lorna is already busy making plans.

Needing some downtime to re-adjust, Alex and Lorna went on an archeological dig, following an invitation from an old friend of theirs. Right before leaving, Havok thanked nurse Annie for taking care of him while he was incapacitated. She was somewhat awkward, uncertain how to deal with him and her feelings, and Alex too was tense. Also, though he never met her before, he somehow felt he knew her and there seemed to be some strange connection between them. [Uncanny X-Men (1st series) #421] 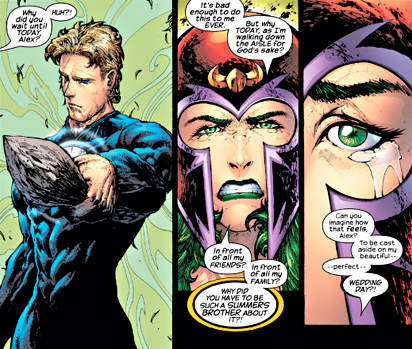 A few weeks later, Alex returned to active duty with the X-Men and slipped back into his role as one of the X-Men’s leaders. Despite his impending nuptials to Polaris, Alex found himself having thoughts and vivid dreams of Annie. Lorna’s unusually aggressive behavior only increased Alex’s misgivings about their engagement. Alex’s feelings for Annie became much clearer when his brother and best man, Scott, hired a local low-level shape-shifter to strip as “Nurse Annie” at his bachelor party. The following day, as Lorna walked down the aisle, Alex called a halt to their wedding. Alex explained that he thought he could make things work with Lorna but had come to realize he was no longer in love with her. Lorna did not take this news well. Drawing all the metal in the area to her, Lorna fashioned a facsimile of Magneto’s costume over her wedding dress and attacked Alex. She blamed his change of heart on Nurse Annie and threatened to attack them as well. 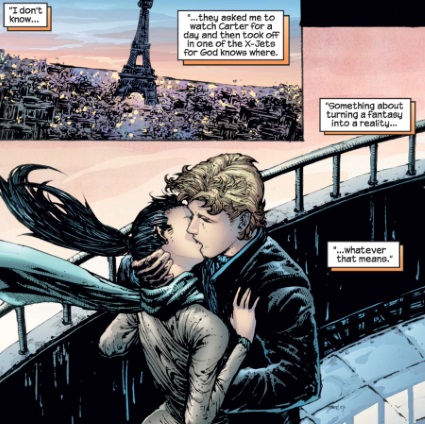 Alex, fled with Annie and her son, Carter. While they hid from Lorna in the woods around Xavier’s estate, Alex revealed that he had figured out his feelings for Annie. During the year that he was comatose and in Annie’s care, her son Carter had been linking their minds while they slept. Through their shared dreams, Annie and Alex had shared a year’s worth of time getting to know one another and falling in love. They even shared their first kiss on the Eiffel Tower. The two had barely had time to express their surprise and joy at this revelation before Lorna caught up to them. Alex faced Polaris in combat and held her off until Annie and Carter could get to safety. Eventually, Lorna was subdued and, while Xavier tended to her mental instability, Alex and Annie jetted off to Paris to make their fantasy first kiss into a reality. [Uncanny X-Men (1st series) #425-426]