Havok actively joined the X-Men and began a relationship with Lorna Dane, much to the anger of Iceman, who too showed a romantic interest in the magnetic mutant. While the senior X-Men were busy in the Savage Land, Havok and Lorna were approached by Xavier about the imminent invasion of the alien Z’Nox. They had never met the professor before, so they weren’t as shocked as the other team members, who believed their mentor dead, while he in isolation had been preparing defenses against the aliens. [X-Men (1st series) #65] 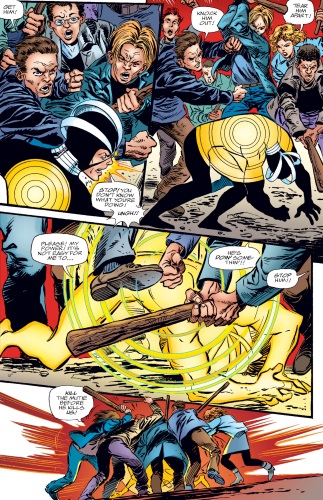 Shortly afterwards, the X-Men encountered a group called the Promise. They wanted to wait for the time after the final confrontation between humans and mutants and only stepped out of their cryogenic chambers every ten years to check on the world’s status and to recruit more members. In one of these occasions, they targeted Lorna and Alex, as they had not yet been indoctrinated by Xavier and could be easier influenced. However, not all within the group agreed with the ways of leader Thomas Messenger and he was killed by Lucy Robinson, who also helped to free Alex from the chamber that would have put her in suspended animation for ten years. With the rest of the team fighting the Mole Man, Havok was the only one that could go to New York and try to aid the Fantastic Four in their battle against Namura and Magneto. Yet Alex never reached his destination, as an angry mob thought he was part of Magneto’s and Namura’s invading army and so he had his first painful confrontation with anti-mutant hysteria. [X-Men: The Hidden Years #21]

Iceman couldn’t accept that Lorna had chosen Alex over him. The two males often battled and, on one occasion, Havok lost control of his plasma burst, accidentally injuring Bobby. Shocked, Alex immediately quit the team. 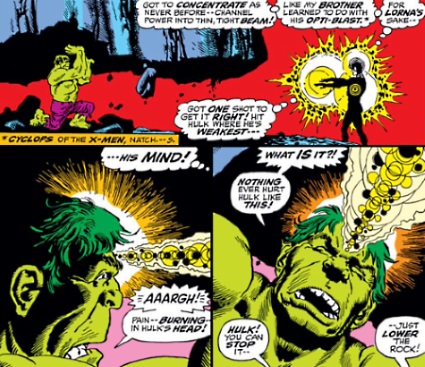 A few months later, Xavier sent Lorna after him to ask him to come back. On her way to the southwestern deserts of the United States, Lorna was recognized by the Hulk, who mistook her for his former green haired lover Jarred. Once he saw his error, the Hulk felt deceived and grew angry. Before things became serious, Havok intervened and battled the raging Hulk, demonstrating a control over his abilities he never had before. Realizing that he could make it as a hero, Havok agreed to come back. [Incredible Hulk (2nd series) #150]

On their way back to rejoin the X-Men, the pair was captured by the Secret Empire; the X-Men did not investigate as Xavier assumed that Lorna had not succeeded in making Alex return and, instead, chosen to retire with her lover together. Only long weeks later, the X-Men became aware that more and more mutants disappeared and, finally, they rescued their friends with the help of the Falcon and Captain America. [Captain America (1st series) #173-175]

After the X-Men’s historic battle against the mutant island Krakoa, which required the recruitment of an entire new line-up of international mutants, the original team, including Havok, left the X-Men. Alex and Lorna decided to enroll in a college in Nevada for geophysical studies [X-Men (1st series) #94] but, soon after, the pair were attacked and brainwashed by a Shi'Ar agent, in the guise of Eric the Red, who gave Lorna the codename Polaris. 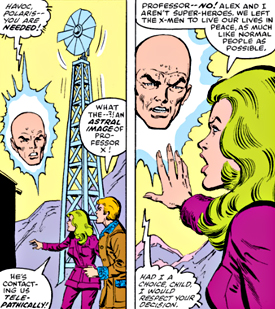 Shortly after the X-Men departed from Scotland, Alex and Lorna too left and returned to New Mexico to complete their degrees. For a time, Polaris and Havok led a happy life, only to be interrupted by the X-Men asking them to help, as they were blackmailed by Arcade into battling Dr. Doom. Only reluctantly, the couple followed their request and, immediately after they had freed the hostages from Arcade, they returned to New Mexico. [Uncanny X-Men (1st series) #145-146]

When the X-Men met the Starjammers again during their many adventures, Corsair revealed this 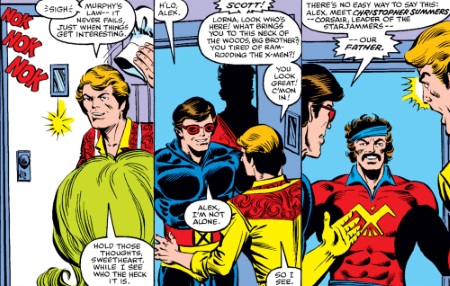 true identity as Christopher Summers, Scott & Alex’s father, to Cyclops and, as soon as the fights were over, Christopher and Scott visited Alex and Lorna in New Mexico for a family reunion. [Uncanny X-Men (1st series) #158] The Summers brothers also learned of the existence of their grandparents and soon they traveled to Alaska to meet them in person.

A few months later, Alex and Lorna found a stranded Brood ship in the desert. Alex wanted to warn the X-Men and visited the mansion  but he arrived at a bad time, as the X-Men were on the 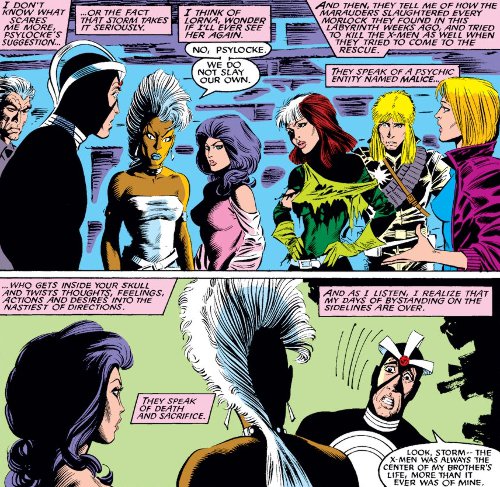 run from the Marauders, who not only slaughtered the Morlocks, but also decimated the X-Men, with three members being critically injured. Havok overheard their plan to go underground, so Psylocke erased the incident from his memory. Yet trained by Professor Xavier, Havok's psi-shields proved to be too strong. He was having strange dreams of being attacked by the X-Men, so he went to New York again and tracked them to the Morlock tunnels. Psylocke dared not to tamper with his mind a second time, fearing she might damage it. The X-Men wondered what to do, as Havok knowing of their location would have endangered their plan. Hearing all this, Havok felt that he was needed and fully rejoined, though he had no idea how to convince Lorna of his decision. [Uncanny X-Men (1st series) #218-219]

Turned out that he didn’t need to, as, in the meantime, Polaris had been ambushed by the Marauders and possessed by the psychic entity, Malice. When the X-Men battled the Marauders in San Francisco, Malice battled with Rogue and Dazzler. Havok joined, curious how this dangerous villains might look like, and found his lover, ready to kill him. [Uncanny X-Men (1st series) #221-222]