Shortly afterwards, during the Fall of the Mutants, the X-Men battled a mystical entity known as the Adversary, who was bent on destroying and remaking the multiverse. The event was broadcasted live on TV and Havok angrily told the reporters how the X-Men time and again saved humanity, but they are always met with prejudice and fear.

In the battle, the X-Men's physical and spiritual essences were used as fuel for Forge's energy star, which destroyed the Adversary and saved the multiverse. They, in effect, died. Roma, a prisoner of the Adversary and guardian of the multiverse, used her powers to recreate the X-Men from scratch. The X-Men decided to keep up the illusion that they were dead, in order to police mutantkind without interference. To help them in this matter, Roma rendered the X-Men present, as well as their friend, Madelyne Pryor, invisible to cameras and all forms of detection equipment. After defeating the Reavers, the X-Men took their Australian Outback base as their own headquarters. [Uncanny X-Men (1st series) #226-227, 229] 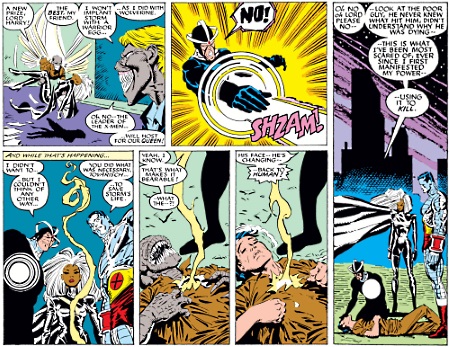 Investigating Havok’s earlier Brood sighting, the X-Men found that the aliens had been targeting mutants as their new hosts. In order to save the life of team leader Storm, Havok was forced to use his power at lethal force, something he had always feared since manifesting his plasma blast. As if he wasn’t feeling guilty enough already, Alex had to watch as the dead Brood transformed back to his former human appearance. [Uncanny X-Men (1st series) #233]

Stuck in the middle of nowhere, Alex and Madelyne slowly found themselves drawn to each other. Both felt betrayed by their lovers and so they started some sort of relationship. However, Maddie was already influenced by Limbo demons, who had awakened her latent powers, [Uncanny X-

Men #239] and soon she caused Inferno in New York, now fully transformed into the Goblyn Queen, with Havok as her Prince by her side. When X-Factor and X-Men met, Madelyne manipulated brother against brother and Havok accused Cyclops of abandoning his wife when she most needed him. Soon, the truth behind Madelyne Pryor was revealed. She was actually a clone of Jean Grey, empowered by a fraction of the Phoenix Force. The knowledge of this drove her insane and she died in battle with the X-Men and X-Factor, while trying to sacrifice her son to gain more power.

When Havok and Wolverine were vacationing in Mexico, they were suddenly targeted by terrorists. They managed to deal with their chasers but were fooled by a damsel in distress, who actually belonged to the terrorists. Havok woke up in a hospital, in the care of nurse Scarlet McKenzie (the assassin without disguise). She slowly manipulated Havok and made him fall in love with her. Scarlett was working for the Russian Scientist, Dr. Neutron, aka Meltdown, who wanted to use Havok as a means to absorb the entire energy of an atom reactor breaking down and transmute it into himself. Scarlett fed Alex with false information that terrorists were trying to sabotage the plant and, when he ventured into the heart of the reactor, he found it shortly before reaching critical limit. According to plan, Havok tried to absorb the dangerous radiation and, when he witnessed Dr. Neutron killing Scarlett, he shot his plasma at him, making him stronger. The timely arrival of Wolverine prevented a full disaster and, after Logan killed the scientist, Alex redirected the nuclear radiation into space. For Alex‘ sake, Logan kept Scarlett’s betrayal secret, as he was still trying to get over the backplotting of Madelyne Pryor. [Havok and Wolverine: Meltdown #1-4]

With some members absent for different reasons, the X-Men were easy prey for Nanny and the Orphan Maker, who attempted to transform them into kids and brainwash them. Only the strong-willed Storm resisted and fought Nanny’s craft in arial combat, requiring all of the villains‘ attention. This allowed the X-Men to snap out of their mental control and, still disoriented, Havok blasted her craft out of the sky, realizing too late that Ororo would be buried by the debris. The X-Men found their leader’s dead body at the crash site and held a funeral. [Uncanny X-Men (1st series) #248]

Not before long, the remaining X-Men received a distress call from Lorna Dane, who was regaining dominance over her mind and body. However, when they reached her, Polaris was kidnapped to the Savage Land, where her supposed sister, Zaladane, stripped her of her 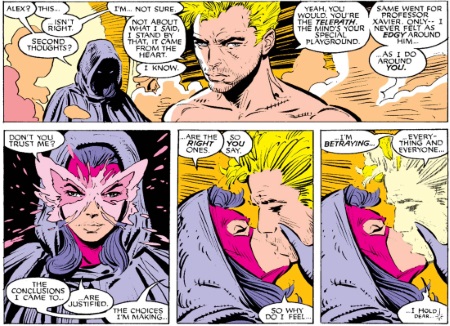 magnetic powers. Havok and his friends followed and helped Lorna to escape but then were teleported to the Australian Outback by the mysterious Gateway.
Warned by a precognitive vision, Psylocke knew that the team would not survive another encounter with the Reavers. Already sensing the cyborgs’ approach, she suggested to escape through the Siege Perilous.

The mystic crystal portal would grant each of them a new take on life, free of the baggage of their current existence. Dazzler and Colossus were easily convinced, however Havok did not trust Betsy and needed a telepathic push. [Uncanny X-Men (1st series) #249-251] 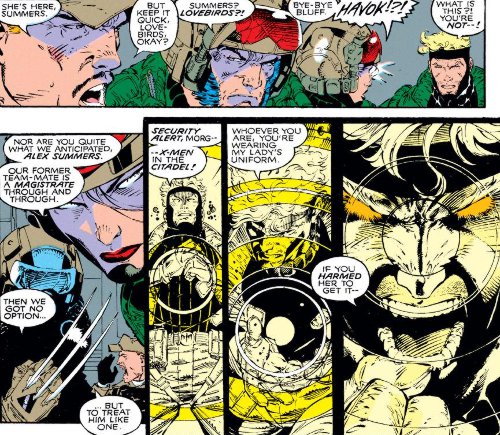 Havok was apparently dropped, amnesic, into the streets of Genosha, the country that used mutants and genetically-engineered slaves called Mutates. He soon became a high-ranking Magistrate in the Genoshan army. His fellow X-Men had no idea of what had happened to him until, during the X-Tinction Agenda, the Genoshan government kidnapped members of the mutant teams X-Men, X-Factor and the New Mutants. Wolfsbane of the New Mutants was turned into one of the mindless mutates too. 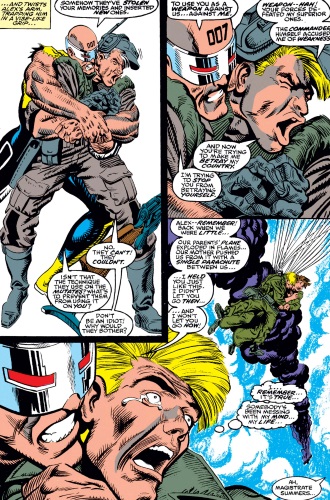 During a pitched battle with his brother, Cyclops, Havok's memory returned but he kept it a secret, hoping to catch the Genoshan leader, Cameron Hodge, off guard. He succeeded and was the one to deliver the killing blow to Hodge.

After the battle was over, he and Wolfsbane stayed in Genosha to make sure that the country would no longer violate the rights of its mutate population. [X-Tinction Agenda crossover]