Havok returned, apparently cured of McCoy's brainwashing, but now leading the Brotherhood in an attempt on the life of J. Jonah Jameson, publisher of the Daily Bugle. In a freefall battle with his brother, Havok told Cyclops, "For the first time in my life - NOTHING IS HAPPENING TO ME! No Living Monolith or Erik the Red ! No Malice or the Genoshan Magistrate! No Dark Beast! I'm not living under the wing of Professor Xavier -- or in the shadow of my brother anymore! Don't you get it, Scott -- for the first time in my life, I am free! FREE!” He then teleported away and left Cyclops to die. Storm saved him, but Havok escaped. [Uncanny X-Men (1st series) #339]

Next, he attacked a government installation, breaking out Fatale and the Dark Beast. He made it clear to both them and the government agents that the Brotherhood would keep the peace 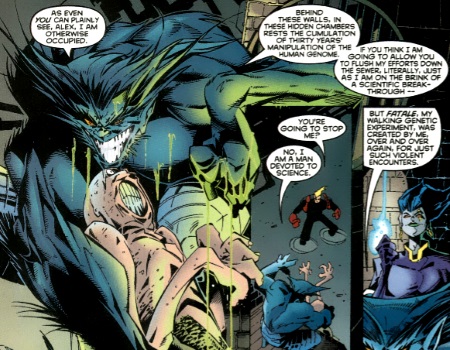 between humans and mutants ... through any means necessary. [X-Factor (1st series) #131] Next, Havok recruited young Nate Grey, the X-Man, for his Brotherhood. With Nate's help, the Brotherhood saved the Canadian mutant, Aurora, from Department H. They also stole a lethal gas called Cold Snap, as a failsafe weapon. Nate didn't trust the Brotherhood with the gas and destroyed it, causing the Brotherhood's base to explode, while Havok and the others escaped. [X-Man #26-29] 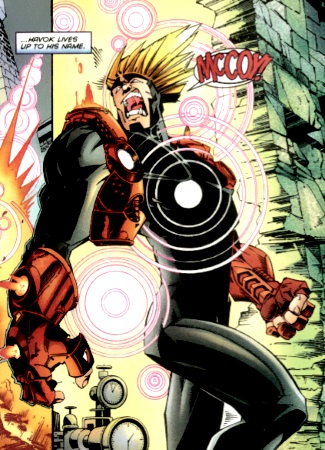 Though he gave McCoy free reign of their headquarters, Havok didn't trust him. He was working with the former Gene National, Ever, and together they worked on a way to expose McCoy‘s dark secrets and stop his genetic experiments. However, when Havok, Ever and his former teammate, Shard, tried to free the humans McCoy had been experimenting on, he was repulsed by the X.U.E., a team of three mutants from Bishop's timeline, who traveled back to the present, using Shard as a temporal anchor and grafted their essences onto three recently-dead, bus accident victims. The X.U.E. told Havok that, in their future, he had released these humans who, unknown to Alex, had been carriers of the Legacy Virus. Because of his actions, millions of humans died, further fanning the flames that caused the creation of the Omega Sentinels and building of anti-mutant settlement camps. Havok's group joined with the X.U.E. to stop McCoy and change the future. [X-Factor (1st series) #143] 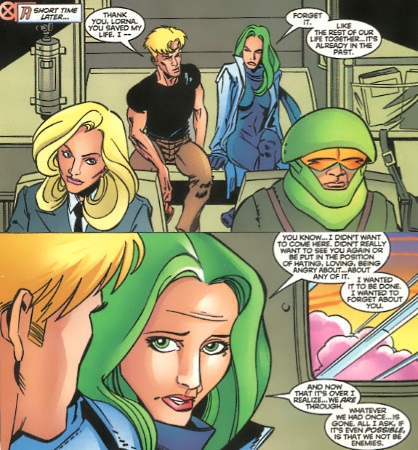 Afterwards, Havok, Shard and the three future mutants, Fixx, Archer and Greystone, formed the new X-Factor. Havok also met with Polaris, who had been recovering from injuries inflicted by Sabretooth. He tried to make up with her, explaining that he was working undercover the whole time, not wanting to waste the chance of investigating the Dark Beast’s operation from within. Lorna could understand, though not forgive him for betraying and even trying to kill her. She ended their year-long relationship, although she agreed to become part of the new team, as well as Multiple Man, Jamie Madrox (who survived as it was only one of his duplicates that had contracted the Legacy Virus). 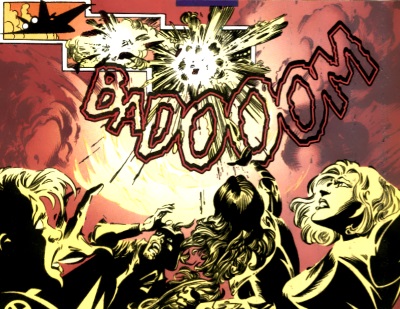 However, Greystone developed a severe case of temporal insanity and he tried to use a slipshod time machine to return to his own time. Havok attempted to stop him but the time machine exploded, apparently killing Greystone and Havok. [X-Factor (1st series) #148-149]

In the explosion, Alex’s mind was transported to another reality, where he took over the body of his counter- part, who too was on the brink of death, as he had been shot by Sentinels. In this reality, Alex was leader of “the Six,” a team 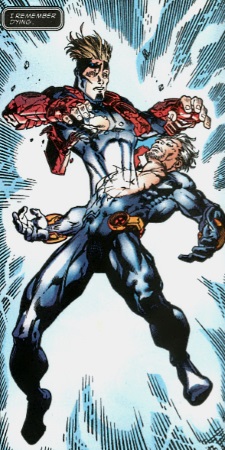 consisting of himself and altered versions of the Goblyn Queen, Iceman, Beast, Archangel and Storm (known here as Marvel Woman), Ice-Man, Brute, the Fallen and Bloodstorm.

Here, Cyclops was taken into space twenty years ago, along with their parents, and Alex was married to Madelyne Pryor and the father of their child, Scotty, named after his long missing older brother. Havok took the place of this dimension's Alex Summers as leader of the Six, though little Scotty recognized that he wasn’t the same person anymore. [Mutant X #1]

Originally, this reality seemed a step up from Havok's homeworld. Mutant-human relations were on the upswing and the Six had been given government clearance, along with the Avengers and Fantastic Four. Madelyne, however, succumbed to her dark side, became the Goblyn Queen and took over the minds of the other four members of the Six. Havok escaped with Scotty and his nanny, Elektra, and they joined forces with Magneto's X-Men in combating Madelyne. In the end, Scotty used his developing psychic powers to purge the Goblin Force, destroying it and causing Madelyne to disappear as well. Love seemed to blossom between Havok and the Elektra. [Mutant X #7-12] 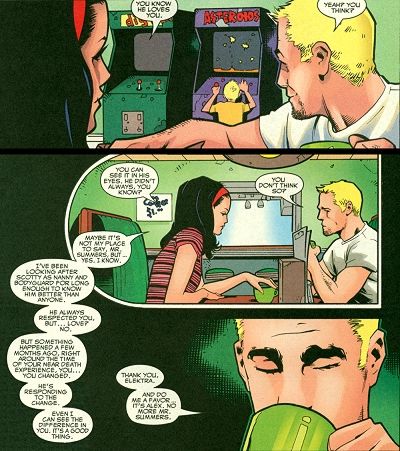 Brute, Ice-Man and Bloodstorm were released from her control, but the Fallen was naturally evil to begin with and left to rejoin Apocalypse. Havok set about rebuilding the Six, but the world took a turn for the worse when the government declared war on mutants. Blaming the sub-race for the Goblyn Queen, the federal government nuked the X-Men at their mansion and sanctioned SHIELD to hunt down all mutants. Havok and his teammates were forced to fight on the run, though the Six received two new members, Captain America and Gambit, and allies in Cerebro and Ariel, the true Jean Grey, who was believed to be deceased on this world.

While visiting Elektra and Scotty where they were hiding in Manhattan, the Six encountered the Fallen and other Horsemen of Apocalypse trying to kill Professor Xavier, who had also been 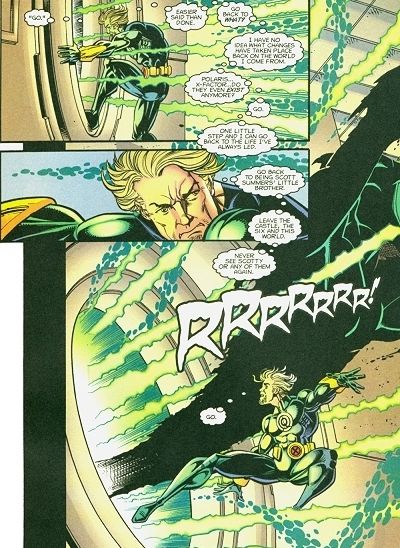 believed dead. Xavier was revealed to be the villain,  however, and Havok joined forces with Ariel and Apocalypse against the professor. Magneto and the X-Men had apparently faked their deaths and, along with the Six and the Horsemen, joined in the battle against the evil Xavier. When Xavier was defeated, Alex sent Scotty to live with Elektra and the X-Men on their moon base. [Mutant X #15-24]

Once, Havok was offered to return home through a detour through the negative zone. Yet, when the portal was opened, a strange entity appeared and battled with the Six. His teammates told Havok to go, as they could handle the beast themselves but Havok was not so sure. Also, he wondered why he would want to return to a reality where he was always in Cyclops‘ shadow and Polaris broke up with him. Havok turned back and helped the Six to send the creature back into the Negative Zone, destroying the portal in its wake. [Mutant X #25]