AGE OF APOCALYPSE TIMELINE: Page 2 of 8

The Age of Apocalypse: The Middle Years

In the first 10 years after the Age of Apocalypse crossover, the timeline was only revisited sparingly. Before the 10th Anniversary event officially continued the timeline after the bombs dropped, AoA stories and characters appeared in the following categories:

Nate Grey, one of the immigrants from the Age of Apocalypse to Earth-616, received his own title where he occasionally revisited his home timeline. X-Man #minus 1 was a flashback of Nate's creation in Sinister’s labs. X-Man Annual '96 had Nate going back to the AoA but arriving in the past. He witnessed a fateful meeting between Forge and Magneto, and learned that he was always destined to visit Forge in the past before he remembered them first meeting. 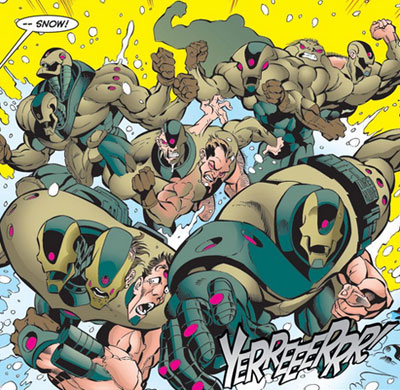 In X-Man #53-54, Nate encountered the cyborg known as Hatchet-9 and some Infinites.
Apparently, Apocalypse’s troops had already been experimenting with trans-dimensional technologies, as once one of the seawalls suddenly appeared in the snowy mountains of Alaska. However, the warp technology was still faulty, as the platform was partially phased into solid rock and the Infinites that were teleported through the breach were fused together and died. Only Hatchet-9 survived and tried to stabilize the gate. Fortunately, X-Man, Cyclops and Phoenix discovered the strange activities and managed to destroy the base and Hatchet-9.

Another flashback tale came from Blink #1-4. That limited series took Clarice Ferguson amnesiac into the Negative Zone, where she encountered Blastaar and Annihilus before returning. The last three pages of issue #4 flashed forward to the end of the Age of Apocalypse and showed Blink being teleported away from the timeline shortly before it was apparently destroyed. This would lead to the revelations of several more survivors from the Age of Apocalypse still existing. 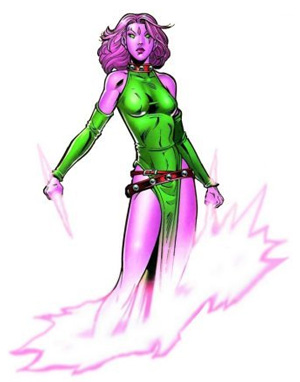 Mere seconds before the bombs destroyed New York, a teleportation gate opened in front of Blink and she was spirited away to a place outside of time. There, she met five other heroes and the mysterious Timebroker explained to them that cascading ripples in time threaten the entire multiverse. The Exiles were forced to hop from one dimension to the next, trying to repair these realities until they finally could go home. [Exiles (1st series) #1] For several months, the team operated under the direction of the mysterious Timebroker, visiting numerous realities, losing and gaining members along the way. Blink fell in love with her teammate Mimic and became the leader of the team during most of their adventures. For a time, Blink was taken off the team and spent some time with her surrogate father, Sabretooth, on some alternate Earth. Nevertheless, they both were eventually added to the Exiles team again. [Exiles (1st series) #59] Blink continued to lead the team when they briefly returned to the Age of Apocalypse and during their subsequent assault on the Timebroker/Timebreakers. During this conflict, the Exiles learned the true nature of the Timebroker/Timebreakers and assumed control of the crystal citadel, also called The Panoptichron. The Exiles then took on the duty of repairing the timelines that were damaged by the Timebreakers, only now they were in charge and made the rules themselves. [Exiles (1st series) #60-68] Blink stayed with the team for a long while but eventually left them to take some time off. When she returned, she was leading her own team, as were all the other Exiles. In a bid to help the multiverse, there were now numerous teams of Exiles, each led by one of the more senior members. [Exiles (2nd series) #1-6] 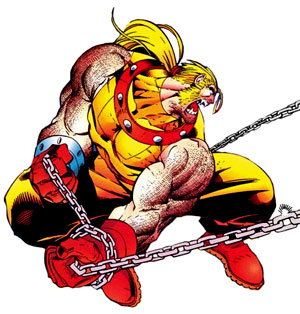 Just like Blink, Sabretooth was rescued and became a member of Weapon X, a group similar to the Exiles but one whose missions demanded more violence. On one occasion, Sabretooth refused to kill a little boy and opposed his team. Ultimately, he opted to remain behind and raise the child to ensure that he didn't become a mass-murderer. [Exiles (1st series) #12-13] Sabretooth spent years on this world raising the child, David Richards, but despite his best parenting efforts David became corrupt and used his immense power to assume control of the world. Sabretooth was eventually reunited with Blink and together they opposed David. Sabretooth was ultimately forced to kill the boy to whom he had been a father. [Exiles (1st series) #59] Following this, Sabretooth remained with the Exiles as they were sent back to the Age of Apocalypse. He helped to lead the team, renewing his relationship with Blink and assuming control of the Exiles’ Tallus device. After helping the team to overcome the Timebreakers' influence and to assume control of their inter-dimensional headquarters, the Panoptichron, Creed continued as a member of the Exiles, traveling through time to repair damaged realities. [Exiles (1st series) #60-68] Like many of the other Exiles, he retired from active duty and returned back to his home world. He found the world had changed drastically from when he left it and a new threat of Weapon Omega had risen. He was depowered in an experiment gone wrong and was forced to seek refuge with a human team call the X-Terminated. There, Sabretooth was forced to work alongside his son, Graydon, now going by the name Horror Show. Graydon held a great deal of hatred for his father but, over time, they began to work out their issues. Sabretooth and Horror Show sacrificed their lives when the ancient threat of the Exterminators bore down on their world. [Age of Apocalypse (1st series) #1-14, X-Termination crossover]

Sabretooth's old partner Wild Child also left the Age of Apocalypse to join a team of Exiles, this time thanks to his own teammates, Blink and Sabretooth. The Exiles eventually gained control of the Crystal Palace that coordinated their dimensional transits, but at great cost and the loss of several members. 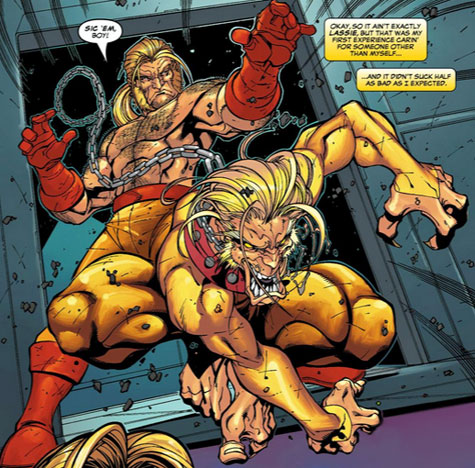 During the struggles that led up to this, the Exiles failed to fulfill their primary mission parameters to safeguard certain realities, including one where the Wolrdbreaker Hulk returned to Earth in control of the Annihilation Wave, devastating their heroic population. During the Hulk's rampage, several key heroes (Sabretooth, Iron Man, Nighthawk and Luke Cage) died who shouldn't have. The Exiles led that reality's Quentin Quire into forming his own team of Exiles, culled from various realities to replace the lost heroes. Kyle, from the Age of Apocalypse, joined Quire in place of his old friend, Sabretooth. [Exiles: Days of Then and Now #1] Like Creed, Wild Child eventually returned to the Age of Apocalypse during the reign of Weapon Omega. He was killed in battle with Archangel and the Clan Akkaba while assisting that universe's X-Force. [Uncanny X-Force (1st series) #12-18]

Two specials dubbed Tales From the Age of Apocalypse were published, detailing historical moments from the original timeline. The first special dealt with Blink's first mission with the X-Men, battling a previous Horseman of Apocalypse, Maximus of the Inhumans, when he was known as Death. The second special, Sinister Bloodlines, showed Christopher Summers briefly return to Earth and reunite with his sons, only to reveal he was the host for a Brood Queen. The death of their father made the rift between Scott and Alex Summers permanent.

Sugar Man’s minion in the slave pens, Rastus, somehow escaped the Age of Apocalypse and joined with his former boss on Genosha. He was seen working alongside the Sugar Man in the tunnels where he attacked and killed a number of Magistrates. He came into conflict with Callisto and Karima Shapandar but he was subsequently defeated. His exact whereabouts now are unknown. [Excalibur (3rd series) #10]

Before the Age of Apocalypse moved forward in the 10th Anniversary limited series, one more round of flashback tales came from the X-Men: Age of Apocalypse oneshot. These three short stories highlighted past events, such as Colossus leaving the X-Men to tutor the Generation Next students, Sabretooth's first meeting with Wild Child and Logan's past history with young Mariko Yashida while living in Japan.