AGE OF APOCALYPSE TIMELINE: Page 7 of 8

The Reign of Apocalypse

Without the X-Men to stop him, Apocalypse rose to power and twisted the world into his vision. 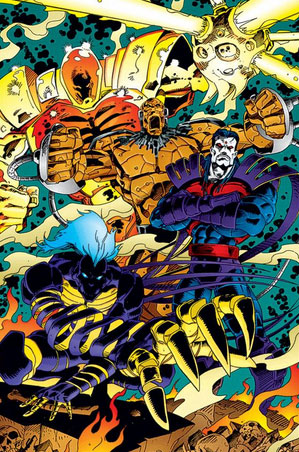 He employed a great number of operatives to act as his generals as well as scientists and fighting forces. After the nuclear strike, there was a lull in Apocalypse's power, as the Eternal One himself was dead and his forces scattered or were imprisoned.

When the Celestials reinstated their evolutionary mandate, however, the newly risen Weapon Omega became the Apocalpyse of a new era, and a new regime.

The most notable of his army were his Four Horsemen. During the crossover, the active Horsemen were Abyss, Holocaust, Mikhail Rasputin and Sinister. Flashbacks and later published stories identified other fallen Horsemen from before that time, including War, Candra, Gideon, Death, Maximus the Mad as another Death, and a mutant Bastion unrelated the Sentinel hybrid. 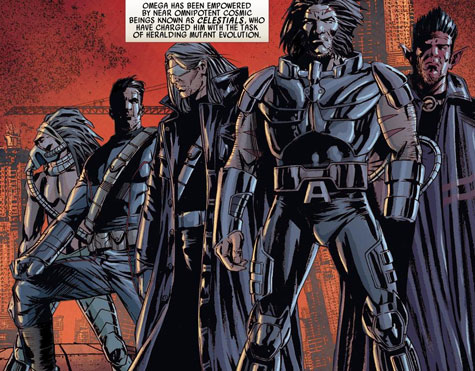 By the reign of Weapon Omega, all of Apocalypse's former Horsemen were dead, so he recruited or resurrected several Alpha-level mutants to serve as his "Ministers":

In addition, Weapon Omega employed the dimension-hopping Dark Beast and Sugar Man as scientists for his cause. Their resurrection work also led to the resucitation of Colossus and Lady Penance, although Omega was unable to retain control of them.

Apocalypse's Elite Mutant Force never recovered from the fall. Northstar and Aurora were tracked and killed by Weapon X and X-23. The Guthries Cannonball, Amazon, Husk and Icarus tried and failed to take revenge on the X-Men. The Bedlam Brothers were never heard from again. (Flashbacks from Sinister Bloodlines indicated that Emplate and the Monets also served with the EMF before being killed. Emplate was resurrected by Weapon Omega; the Monets seemingly were not.)

Apocalypse's other forces such as the Madri, Infinites, Brotherhood, Pale Riders and various bounty hunters did not resurface after the fall either.

Tales From the Age of Apocalypse showed in flashback that Death (Maximus the Mad) had his own personal Inhuman Strike Force and it was comprised up of clones of the Inhuman Royal Family as well as Rhino. What became of the real versions is unknown. The Absorbing Man and Diablo also appeared in flashbacks among Apocalypse's servants. By the reign of Weapon Omega, several characters from Apocalypse's tenure remained as part of the new order, such as Keeper Murdock and Sebastian Shaw.

Without Apocalypse’s constraints, Mr. Sinister was able to set up his own group of powerhouses with which to attack the X-Men. Going by the Sinister Six, they were made up of Cloak, Dagger, Jean Grey, Soaron (Sauron) and Sonique (Siryn). The sixth member was never named, and several sources attribute him to being Blob or Avalanche.

Years later, when Weapon Omega rose to power, he had his own personal strike squad called the Black Legion. They were made up of:

Despite the very different path taken by Emma Frost, the Massachusetts Academy existed in the Age of Apocalypse and served as a training grounds for the Hellions too, apparently to be raised as loyal agents of Apocalypse. The Hellions included Beef, Catseye, Roulette and Tarot, as well as at least three more unidentified members.

Initially overlooked by the Shadow King, Quentin Quire used his gifts to co-opt a number of low level telepaths into his Overmind. Amongst them were Kara Killgrave (Purple Girl/Persuasion), Mesmero and Moondragon.