AGE OF APOCALYPSE TIMELINE: Page 3 of 8 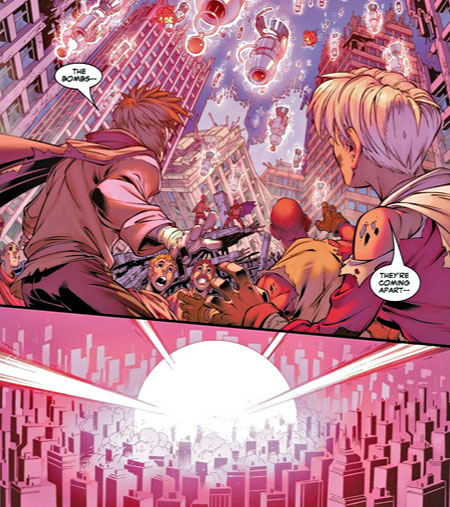 The heroes of the Age of Apocalypse stood tall, boldly awaiting their fate as countless bombs rained down on North America. A wave of light washed over them as reality blinked away... and then returned just as suddenly. The bombs froze in mid-air and detonated, miraculously leaving those below unharmed. Magneto tried to explain to his wife, Rogue, that this was not his doing but was interrupted by his son, Quicksilver, who assumed that he was their savior once more. Seeing the hope in the eyes of his family, Magneto allowed the world to believe that he was responsible for their salvation. His deception provided the survivors, mutants and humans alike, with a visible symbol of hope and security. Magneto’s victory was soon tainted by the arrival of Weapon X, who delivered the body of Jean Grey who had died trying to save them. Weapon X entrusted the body to Magneto, who was haunted by the secret that it was actually Jean who saved all reality, and not him. [X-Men: Age of Apocalypse One-Shot]

A few months later, it turned out that the secret was known to one other: Sinister. He approached Magneto and blackmailed him by threatening to reveal his lie to the world, unless Magneto left him alone and agreed to serve him when he finally called upon him for help. Sinister also revealed to have the comatose Jean herself as proof, having salvaged her body and restored her fully after the X-Men had buried her. Though outraged by Sinister’s offer, Magneto agreed to the bargain. In light of the X-Men’s recent achievements and the general public beginning to trust mutants, he felt that he was still needed as a living symbol of hope for the survivors of Apocalypse’s reign of terror. [X-Men: Age of Apocalypse #5] 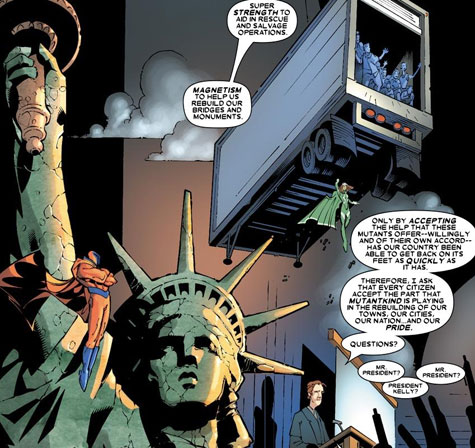 Unaware of their leader’s deal with the devil, the X-Men took an active role in restoring a world ravaged by Apocalypse. They assisted in both the physical and political restructuring of the world and began the arduous task of dismantling Apocalypse’s empire and freeing those who had suffered under his tyrannical rule. Some of the mutants they rescued chose to join the X-Men, including Wolfsbane, Beak and the mysterious woman called Xorn. The X-Men prove so instrumental to the rebirth of the world that newly-elected US president Robert Kelly appointed Magneto his Director of Mutant Affairs. His first task was to track down and apprehend Apocalypse’s remaining agents.

For this job, Magneto decided that the X-Men might benefit from re-adding Weapon X to their ranks and sent a special X-Man to find him: his daughter Kirika aka X-23. Eventually, she found him in the Canadian wilderness and tried to convince him to return with her. However, it’s only after father and daughter together tracked down and killed the deadly duo of Northstar and Aurora that Logan realized he still has payback to dish out and agreed to come along with Kirika.

Meanwhile, as the X-Men reached out to the Morlocks, outcasts who survived Apocalypse’s pens and experiments, they learn that not all mutants view them as saviors or trustworthy allies. 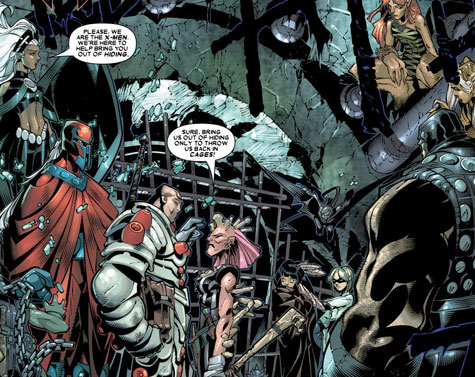 A battle ensued and, although the X-Men emerged victorious, it caused Magneto to have doubts about the dream of human/mutant coexistence, along with his guilt complex regarding the deal with Sinister resurfacing. Right then, the X-Men were alerted to one of Apocalypse’s most loyal follower, Holocaust, being spotted in New Mexico. Immediately they dispatched a small strikeforce, consisting of Quicksilver, Gambit, Sunfire and Magneto, to investigate. It was soon discovered that Holocaust was not alone, but accompanied by former X-Men Blink and Sabretooth, and some other mutants. Together, they made up the dimension-hopping group called Exiles, who jumped around broken realities in order to repair them, their current mission order being to kill the X-Men. However, realizing that they have been set up by their mysterious mentor, the Timebroker, the Exiles only fought the X-Men long enough for them to acquire certain notes regarding the M'Kraan crystal, eventually enabling them to leave the timeline without having to carry out their assignment. [X-Men: Age of Apocalypse #1-2, Exiles (1st series) #60-61] 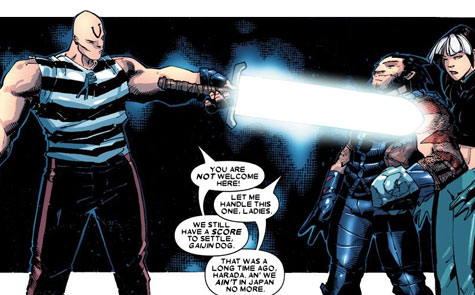 X-23 and Weapon X's arrival at the X-Men’s mansion immediately caused tension, due to some unresolved matters between Logan and the Silver Samurai, a new addition to the team. Before they could settle their argument, the X-Men were alerted to a public attack by some of Apocalypse’s elite followers, the Guthrie siblings. Storm led the squad that engaged Cannonball, Amazon and their brother Jay in battle, unaware that the actual war was fought back at home. Xorn revealed herself to be none other than Paige Guthrie in disguise, having apparently survived Generation Next’s last fight in the Seattle Core. She had then been taken prisoner by the guards and left there to starve to death after Apocalypse’s fall. Eventually, though, her siblings found and freed her, and Paige joined them out of gratitude. Taken by surprise, Rogue was easily defeated and, by the time the X-Men returned, they found Paige and her siblings waiting with Charles and Rogue as their hostages. 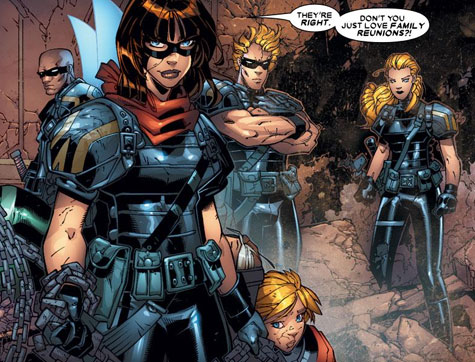 Fortunately for the X-Men, they were helped by their ally Psylocke, who remained unseen in the shadows until she had a chance to free young Charles. With the child of Magneto safe, the X-Men attacked the Guthries head-on. Right then, Magneto returned with the other X-Men from New Mexico and sentenced the Guthries to death for daring to trespass in his home and threaten his family. In mere moments, Magneto and Sunfire killed three of the Guthrie siblings, leaving only Paige. Rogue intervened and spared Paige, explaining that rather than granting her the quick release of death, she should be punished to spend the rest of her life alone in a cell. Enraged, Paige moved to attack Rogue but was stopped by a fatal blow from X-23. With her dying words, though, Paige had a final victory, as she revealed that the Guthries were working for Sinister and that the he wanted Magneto to remember and honor their deal. [X-Men: Age of Apocalypse #3-4]

Naturally, the assembled X-Men demanded to know the meaning of her comment and Magneto finally admited to his astonished followers that he had been living a lie and that he made a deal with Sinister, believing it would be for the greater good. 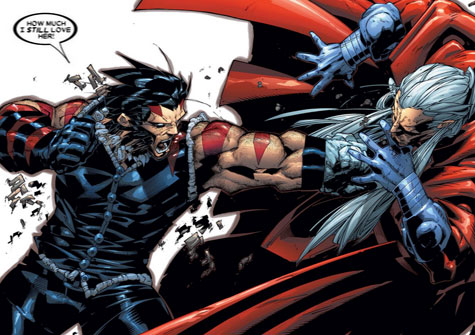 When he explained the part of Jean Grey still being alive and in Sinister’s clutches, it generated a great deal of strife among the X-Men. Logan nearly gutted Magneto for keeping the truth about his love secret from him and, as a former victim of Sinister, Wolfsbane too feels violated by Magneto’s actions. Although most of the X-Men were outraged at Magneto’s duplicity, they could understand his reasons. They then agreed on setting things right by tracking Sinister down and saving Jean. Weapon X catched a scent off of Husk that led them to Sinister’s lair - ironically his old base, to which he had returned. Once there, the X-Men were confronted by Sinister and his lackeys, the Sinister Six as he called them, with Phoenix among its membership.

As the two teams faced off in a battle royale, Magneto cornered Sinister and demanded to know his plans. Sinister revealed that his goal was not to replace Apocalypse as the ruler of the world but to find and control the power of Mutant Alpha; the genetic descendant of the first mutant possessing immeasurable power. 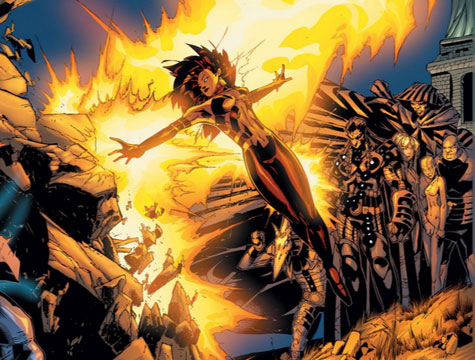 To Magneto, it was obvious that he was referring to Jean, whose innate connection to the Phoenix Force allowed her to stop the nuclear attack and the chronal wave that threatened their reality. The conflict with the Sinister Six seemed hopeless until Psylocke used her psychic blade to disrupt Sinister mental control over Jean. Remembering herself and her old life, Jean sided with her friends. The tide quickly turned and the X-Men found themselves victorious, though not without casualties. Quicksilver died protecting Magneto and Gambit was lost as well. Together, Jean and Magneto destroyed Sinister once and for all, and Psylocke used her powers to undo the brainwashing of the other members of the Sinister Six.

In the aftermath of the battle, the X-Men buried their dead and Magneto admited his deception to the world - which cost him dearly. As he was willingly sent to prison to atone for his mistakes, Jean agreed to lead the X-Men in his place. Under her leadership, they continued the dream of creating a world in which both mutants and humans could live together in harmony. [X-Men: Age of Apocalypse #5-6]