AGE OF APOCALYPSE TIMELINE: Page 6 of 8

Whilst he didn’t feature in the crossover or subsequent series, Charles Xavier did exist but was killed many years before the events of the crossover.

The X-Men remained active as Magneto became Director of Mutant Affairs in the re-established American government. Blink and Sabretooth were off with the Exiles by this time. Wild Child, Iceman, Morph and Exodus were lost on an unspecified mission. A tombstone was seen once for Iceman, but given his later return, it may have merely been in memoriam. Banshee, Shadowcat, and Colossus remained dead following the crossover. Former members such as Gambit and Nightcrawler left their splinter teams and rejoined the main branch of X-Men. 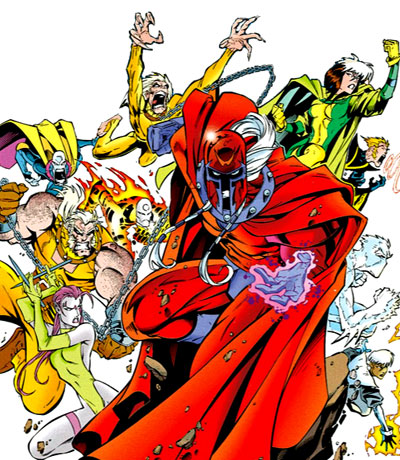 By the conclusion of X-Men: Age of Apocalypse, the roster had shifted. Quicksilver was dead, Gambit lost to the Dark Dimension and Xorn betrayed the team, revealing herself as the former student, Husk. Jean Grey replaced Magneto as head of Mutant Affairs, while Weapon X also rejoined the team as a leading figure. Psylocke appeared as an ally of the team, but her status with the group was unclear.

The roster changed considerably in the ten years following the rise of Weapon Omega. Sabretooth and Wild Child returned from their extra-dimensional adventures. Iceman and Gambit had also resurfaced. A number of new and old members were also missing. Before learning the identity of Weapon Omega, the X-Men thought Logan and a team of X-Men led against the Celestial Ship had perished. Weapon X and Storm emerged transformed as Weapon Omega and Orodius, respectively, but any other unaccounted for X-Men may have indeed been killed. Charles Lehnsherr was among the known casualties, killed by Demon-Ock of the Black Legion.

The conflicts with Clan Akkaba on Earth-295 and Earth-616 left Nightcrawler on that alternate Earth, Jean and Sabretooth powerless and working with the human resistance known as X-Terminated, and the rest were killed. Nightcrawler eventually returned to his home reality only for he and Creed to die fighting the X-Terminators before their entire reality was sealed off to prevent those Celestial monsters from escaping into the multiverse. 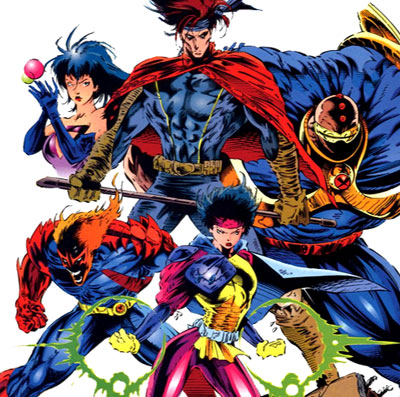 The X-Men's sister teams were never reformed in the aftermath of the nuclear strike on Apocalypse Island.

Generation Next, X-Calibre and the X-Ternals remained disbanded. Known survivors such as Mystique, Switchback, Damask, Lila Cheney and Jubilee were not heard from again.

Husk, sole survivor of the attack on the Core, joined her former EMF siblings for revenge against the X-Men. 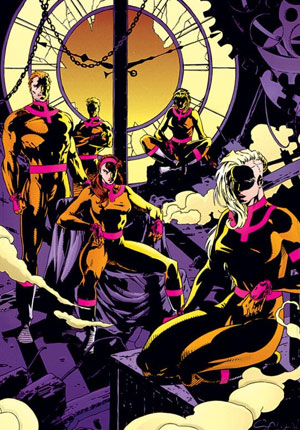 The surviving members of Nate Grey and Forge's resistance troup, Soaron and Sonique, were later brainwashed and forced into Mister Sinister's Sinister Six.

Over in the UK, the Human High Council aided the X-Men in trying to bring down Apocalypse’s regime. After the reinstatement of human governments in America and around the world, the High Council disbanded. As a result, the humans were largely caught unawares when Weapon Omega ascended. 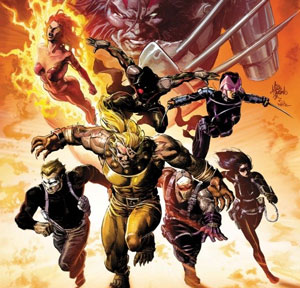 A group of humans banded together to bring him down. The X-Terminated were:

And their allies were:

Although Weapon Omega arguably ruled the world, he allowed puppet regimes and token rivals to exist in Europe and Asia to continue fueling his survival of the fittest dogma. In Great Britain, there was a group called the Knights of Pendragon led by Peter Wisdom. They were tasked with keeping order and fighting against Weapon Omega’s rule. Emma Frost regained the telepathy she posssessed before working for the Human High Council, styling herself as a queen in Europe. Her mind and powers were actually under the sway of Victor von Doom, ho had retreated to his native Latveria to preserve his own people against any threat. In Russia, the threat of Omega Red as a potential rival to Weapon Omega was mentioned several times, but never seen.

When New Apocalypse was created and Weapon Omega overthrown a new government was installed. Lady Penance (M) took the role as leader whilst she used a brainwashed Sugar Man as her scientist and Colossus as a bodyguard.

After the fall of Apocalypse, a number of mutants experimented on by Mr. Sinister grouped together and called themselves the Morlocks. They were:

There were also individual operatives, working on their own or in small, isolated groups looking to either help or hinder the regime. A number of these operatives appeared in Tales From the Age of Apocalypse in flashbacks to before the crossover began.. Among them were: Christopher Summers (Corsair), Cobra, Colleen Wing, Joseph Robertson, Mister Hyde, Misty Knight, Robert Kelly, Trish Tilby (the exception, who appeared in Magneto's Director of Mutant Affairs era).