Involved issues : For four months the entire line of X-Titles was replaced by new titles that composed the Age of Apocalypse crossover :

In addition to the existing titles, several one-shots and a limited serieswere released for the crossover:

Basically you can read it as Alpha, all #1s, all #2s, ...., Omega but sometimes the events of one title affect another, and some characters like Magneto, Apocalypse, the Shadow King, Jean Grey and Bishop hop through many titles. The most important cross-references can be seen in the flow-chart diagram below. The suggested read order is for some parts based on assumptions. It works, but surely some issues could be placed in another, also working order.

To comment on the books that are set before X-Men Alpha, the "real" start of the crossover : X-Men Chronicles deals with important turning points and backstory of the X-Men and other important characters of the event. The X-Men’s first battle with Apocalypse, the death of the Scarlet Witch, Logan and Jean Grey leaving the X-Men, and the transformation of Nemesis into Holocaust are among the addressed episodes.

Not really needed for the crossover are : X-Universe #1-2 deals with the non mutant characters. It only helps to answer questions why none of the other Marvel heroes interfered with Apocalypse.

Age of Apocalypse: The Chosen is a book of files about what Apocalypse thinks of the other characters. Kind of comparable to Stryfe's Strike File around the X-Cutioner's Song crossover. 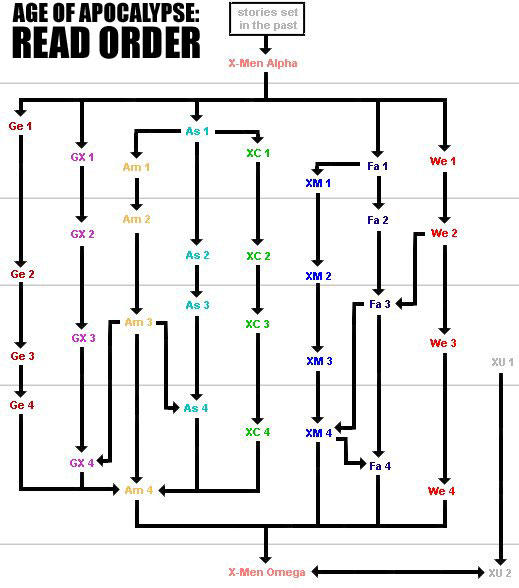 Suggested order to read the AoA