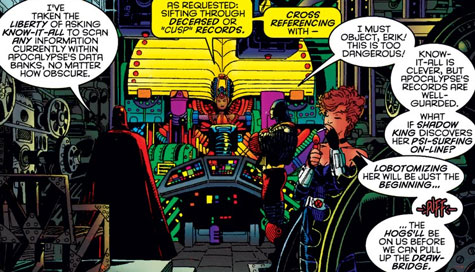 The recruitment of a time-traveler seems the biggest problem, as Apocalypse had killed all people with chrono variant powers to prevent anybody from defeating him by altering history. Magneto visits Generation Next, young mutants training to be the next generation of X-Men under the guidance of former X-Man, Colossus, and his wife Shadowcat. They have Know-It-All hack into Apocalypse’s data banks to search for any suitable mutant, even somebody who has not yet manifested powers. The search comes up with only one possible candidate – Illyana Rasputin, much to Colossus’ surprise as he had believed his sister killed in a culling. Know-It-All learns that Illyana is held in a high security prisoner plant called The Core, making any attempt of liberating her sound like suicide. 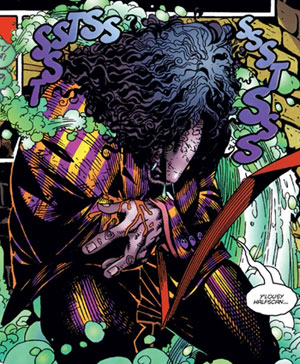 Still Generation Next splits up to break into the complex. Skin and Chamber pose as workmen to get in the front door. Husk and Vincente kill Quietus, the supervisor of The Core, and adopt his guise, with Husk morphing into his ugly, deformed head and most of the body of Quietus and Vincente using his power filling in some added mass. They sift through Quietus' office to find information about little Illyana. Meanwhile, Shadowcat and Colossus are near the back entrance of The Core, from where they keep track of their wards via Know-It-All. Mondo enters the plant by merging with the ground and melting into the brick walls. He finally locates Illyana and hides her inside himself.

Unfortunately, Skin’s and Chamber’s cover is blown, and when the Sugar Man, the prison’s overseer, instructs “Quietus” to kill them, Husk and Vincente are exposed too. Mondo tries to smuggle Illyana out, but the scared little girl fights him from inside, and he is too discovered and killed by the Sugar Man. 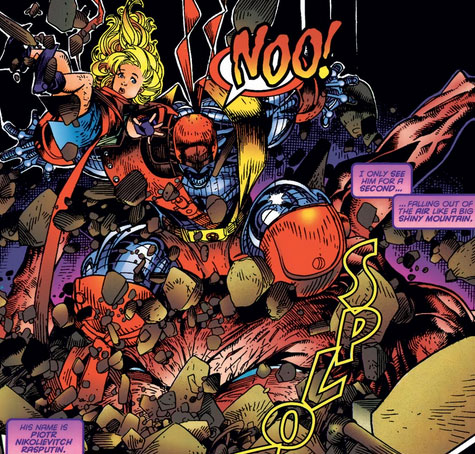 Accompanied by his wife, Colossus fights his way to their charges and after beating the Sugar Man to a pulp, reclaims Illyana. By now, Generation Next learns that it is easier to break in than to get out, as they are surrounded by dozens of guards. Deciding that Magneto’s mission and Illyana’s safety has top priority, Colossus orders Shadowcat to take him and the girl to safety, though it means abandoning their students. He later returns to rescue them but they are beyond help, so he takes Kitty and Illyana back to Magneto’s base. Little does he suspect that the Sugar Man regenerated himself from one of his bodyparts, and is now very tiny, hiding in Colossus’ boot. [Generation Next #1-4]

For the second task, Magneto chooses Gambit and his band of X-Ternals, despite their grudge over both of them loving Rogue. 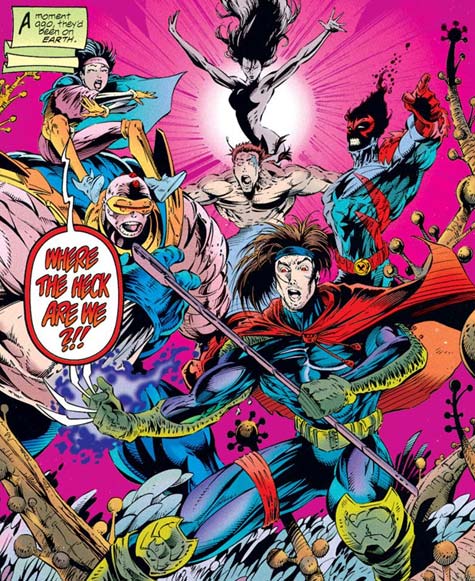 Who better than a thief to steal this powerful object from half a universe away? Gambit even has a means to travel this vast distance among his team in the form of his new girlfriend, Lila Cheney, though she herself has not realized her mutant ability yet. Magneto takes the X-Ternals to one of Apocalypse’s secret chambers in the Morlock Tunnels and with the equipment there, he makes her manifest her interstellar teleportation abilities. However, during the process, a band of Apocalypse’s Infinites, led by Rictor, show up. Lila transports her team deep into Shi’Ar space, where the M’Kraan crystal is located, though Rictor is caught by her power signature as well.

The mutants materialize on an alien planet, right in front of the Imperial Guard. After a short fight, the X-Ternals escape and hide in a jungle, where they learn more about the M’Kraan from some of the natives. On his mad quest for power, Shi’Ar Emperor D’Ken has been tampering with the crystal, and it’s expanding nexus is now endangering the entire universe. More and more frequently, the crystal sends out waves of energy that cause the eradication of all reality for brief glimpses. Rictor sides with the Imperial Guard and makes a deal with them. He has a tracking device on one of the X-Ternals and will help bring them in, if he is granted to deliver the X-Ternals back to Earth as his captives. Gladiator agrees and soon the Imperial Guard and Rictor crash in on the X-Ternals, right as, unfortunately for everyone, the crystal wave starts enveloping the planet.

In the last instant, the X-Ternals are beamed up to a ship piloted by the Starjammers, led by Deathbird. Together the two teams make their way to the planet where the M’Kraan crystal is located. While the Starjammers try to distract the Shi’Ar fleet, Deathbird accompanies the X-Ternals to the planet‘s surface. Guido, Jubilee and Sunspot take on D’Ken’s army while Gambit, Lila and Deathbird head off to look for the crystal – which is rather huge, and they wonder how they can steal something of that size. However, they are pulled inside the structure, where they are welcomed by the M’Kraan’s guardian, Jahf. He explains to Gambit that it’s up to him to save the universe, or actually all universes, as a cascading effect through the nexus would destroy all of them. In order to gain a piece of the crystal, which is as good as the entire object, Gambit need’s to give something of himself, and he sacrifices his unrequited love for Rogue. The team are granted the desired M’Kraan fragment and head back to earth, though Sunspot remains behind, as he has absorbed too much of the crystal’s destructive energies and is about to explode. By the time Lila teleports, Rictor and Gladiator have finally caught up and, pitying the Infinite leader, she takes him along.

The group emerges back in the Morlock tunnels and Gambit orders his team to split up. Predicting that Rictor will go after him and Lila, he gives the crystal shard to Jubilee and Guido to bring it to Magneto. On their way towards the mansion through the Morlock tunnels, they run into Nanny who is trying to bring baby Charles to safety. (see more on this on the next page) Surprisingly, Guido destroys the robot that could have led the way. It turns out that Guido has turned traitor. He was caught by Apocalypse’s troops a few months earlier and had a bug implanted in him. Guido takes both the crystal and the baby, leaving Jubilee behind in tears. 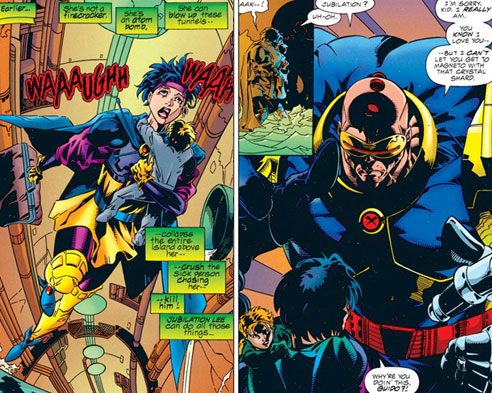 Elsewhere, Gambit and Lila are luring Rictor away, but when he lets out that he has a means to track Guido and Jubilee, Gambit decides they should turn around and keep them from getting to the X-Men mansion (and leading Rictor there). In the main access tunnel, they run into both Guido and Rictor and chaos ensues. As the tunnels cave in, Gambit can either rescue Lila, or the crystal and baby Charles. Gambit chooses his love, and they both end up being toppled by debris. Guido brings both the baby and the crystal shard to Apocalypse’s stronghold and, when Rictor later arrives, eager for a promotion for the X-Ternals’ demise, he is killed for not realizing the importance of the two prizes. [Gambit and the X-Ternals #1-4]

The only capable precog that Magneto knows of is a woman named Destiny, although he has never met her in person. However, she long left the battlefields behind her and created a peaceful community called Avalon for humans and mutants alike. Magneto orders Nightcrawler to find her, as his mother, Mystique, is the only one who happens to know her and also is ferrying refugees to Avalon. Kurt sets out to do as asked, and goes the route many refugees have gone before him. Learning of a submarine heading to Avalon, Kurt makes sure that he is one of the passengers, unaware that his actions are being monitored by Apocalypse’s spies, who have long been trying to uncover Avalon’s whereabouts.

During the journey, Nightcrawler is confronted with the hard truth that the rumors of the refugees being robbed and dumped into the ice-cold ocean are not exaggerated, as the craft is raided by Callisto and her band of pirates. 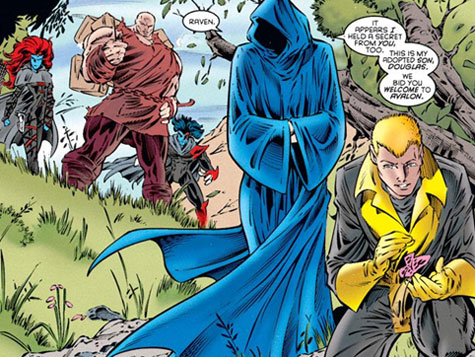 Kurt is the only one to survive, as he teleports to safety in the last instant. One by one, he deals with Callisto’s crew, though is about to be shot by the woman herself. That’s when suddenly Mystique shows up, coming to her son’s rescue with a small aircraft. After effectively dealing with Callisto, she takes Kurt to Avalon, hidden deep in the Savage Land, where they are welcomed by the mysterious Cain. He picks up the new arrivals and takes them to Destiny. After proper introductions are made to Destiny’s adoptive son, Douglas, and Switchback, another recent arrival, mother and son explain what they came for. However, Destiny has no intention of joining them in Magneto’s plan, as she has a recurring vision of Avalon going down in flames. 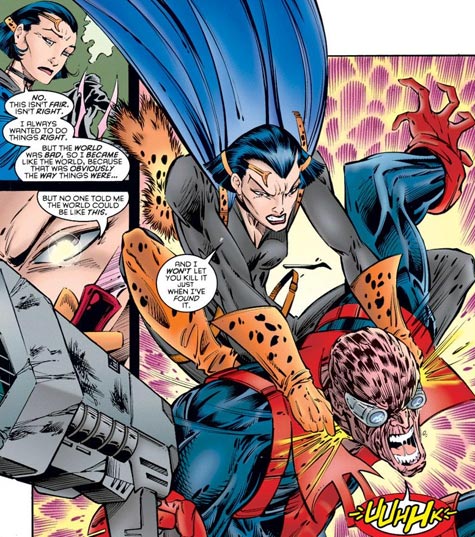 Indeed, chaos ensues, as Apocalypse’s Pale Riders have followed the Darkholmes to the peaceful community and immediately start to destroy it with massive explosions. The Riders’ leader, the telepathic Damask, however, is marveled by the place. She never knew that such beauty could exist and she decides that it needs to be preserved. In order to do so, she turns on her teammates and kills them. Next, Damask warns about Apocalypse probably sending some back-up after the Riders, and, as if to prove her right, the Shadow King appears and starts possessing Avalon’s settlers, making them kill each other.

When the Shadow King takes over Mystique, Kurt comes up with a plan to take him down. Suspecting that the Shadow King resides within an adjacent dimension, Nightcrawler hopes to get to him by combining his powers with those of both Damask and Switchback. Kurt teleports the three of them, while Switchback extends their transition time to keep them in the dimension, which normally they would only stay for a fraction of a second. This gives Damask enough time to use her psionic skinning on the mind of the Shadow King. In the instant of dying, the Shadow King fires one last blast at Destiny, but Doug jumps into the way, saving his mother. With Avalon in flames and her adoptive son dead, Destiny has lost everything she has worked for. Swearing that Apocalypse will be brought down, she decides to return to America with Nightcrawler. [X-Calibre #1-4]