Inside the stronghold on top of Manhattan, Holocaust and Apocalypse enjoy torturing the captive Magneto until they are informed of the Eurasian Human High Council having unleashed their bombs on the midwestern part of America, killing millions. Apocalypse commands to expand the sea wall defense grid across the Atlantic, well aware that this will kill all inhabitants of Eurasia.

Thanks to Blink’s teleportation powers, the X-Men and their friends secretly enter the pens and find them empty. They proceed to the chamber where Apocalypse has placed the M’Kraan crystal and prepare to send a team into it to correct the timeline. 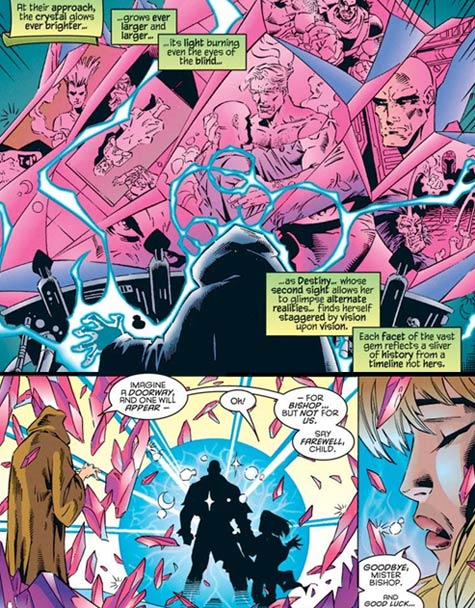 Destiny reveals that only she, Illyana and Bishop can enter the crystal, as they no longer have a counterpart in the true reality. Meanwhile, Nate Grey has entered the palace, seeking vengeance for his mentor, Forge’s death. He pools resources with Magneto to fight Apocalypse and his son, and soon the combatants burst through a wall – to where the other X-Men are standing in front of the crystal. While the X-Men protect the M'Kraan from the incoming forces, Destiny, Illyana and Bishop reach the heart of the crystal. Guided by the elderly woman, Illyana unlocks her mutant power and creates a portal for Bishop that sends him to Israel twenty years in the past where everything began. The X-Men fail to notice the Sugar Man coming out of hiding place in Colossus’ boot and making his way into the crystal. Additionally, although they do witness the Dark Beast using a teleporting device set to the same location, they are too late to stop him.

Outside in the streets, Jean Grey and Cyclops are leading the people they freed from the pens towards New Jersey. They are unaware of themselves being stalked by Havok and, when Jean senses the death of the many people in the midwestern bombing, she knows that they are about to share the same fate. Sensing the bombs approach, she erects a telekinetic shield over New York, hoping to avoid the mass destruction. At the same time, Logan parachutes down, as he wants to spend his last minutes together with Jean. However, such joy is denied him, as Havok fires a fatal plasma blast in Jean’s back and then kills Cyclops. Once he lands, Weapon X stabs Havok from behind and then tends to Jean, who dies in his arms. 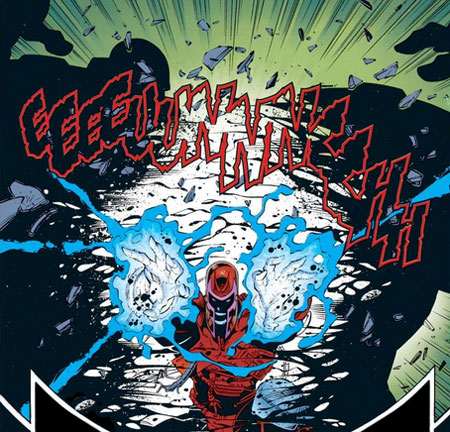 In the remains of the stronghold, Nate Grey is fighting Holocaust and, intending to damage his armor, rams a crystal shard into his chest, with unexpected results – both vanish without a trace. Magneto seemingly looses his final battle with Apocalypse, but he was only taking time to concentrate. In the end, he manages to charge enough magnetic energy to rip Apocalypse in half. As the bombs hit the ground a few minutes later, Magneto holds his wife and son close to him and he thanks Charles Xavier for giving him such a great dream to fight for.

In the past, Bishop manages to prevent Legion from accidentally killing Xavier. Instead, he rams the psi-knife intended for Erik Magnus Lehnsherr into his own chest, so that Legion sees the nightmarish images of the Age of Apocalypse. Seeing the horror he would cause, Legion dies of the energy feedback, and the old Bishop too fades out as reality reboots. Without Legion to anchor them, the four X-Men who went into the past after him get sucked back to the present. In Israel, Charles Xavier, Erik Magnus Lehnsherr and Gabrielle Haller are left behind wondering what happened. [X-Men Omega]

However, while the main universe is restored, the Age of Apocalypse did not vanish. Legion’s actions apparently created a divergent reality, and both worlds continue to exist as parallel timelines.