The Age of Apocalypse crossover started with X-Men Alpha. Readers were introduced to an entirely new status quo. The X-Men had a totally different line-up and many characters that were well known heroes suddenly worked for the bad guys and vice versa. All these changes were the result of an event ca. twenty years in the past that wasn’t supposed to happen ... the death of Xavier.

Two decades ago, Charles Xavier and Erik Magnus Lehnsherr were working at a mental hospital in Israel. (If you are looking for a reference point in the X-Men series check out Xavier’s flashback in Uncanny X-Men #161, which is shortly before the point where the timelines defer.) Gabrielle Haller was a patient under Dr. Xavier’s care and the two of them had a brief but intimate relationship. Around the time Xavier left Israel to continue his journeys, Gabrielle discovered that she was pregnant. Xavier would learn of the existence of his son David only over a decade later.

David developed mutant powers and became known as the schizophrenic mutant Legion. After long months in a coma, David awoke with his fractured mind intact and he decided to help his father in achieving his dream. Legion travelled back in time to kill his father's main adversary before he would become the evil mutant Magneto and oppose Xavier’s dream of peaceful coexistence wherever he could.

A team of X-Men consisting of Bishop, Iceman, Psylocke, and Storm followed Legion but they were not able to stop him because of the memory loss that they had suffered as a result from the time travel. Sadly, Legion’s plan backfired as Xavier leaped in front of his friend and took the blast meant for Magnus. Xavier’s untimely death changed reality – he could no longer father David, nor found the X-Men and the time travellers vanished into thin air. All but one. Being a chronal anomaly himself, the time displaced Bishop remained; he wandered off, still having no idea what has happened.

From his base of operations Apocalypse watched the news broadcasts of the mutant battle in Israel. Because of the high power displays, Apocalypse decides to move along with his plans of World Dominion in his Darwinist view (“survival of the fittest“) ten years earlier than he originally had planned. 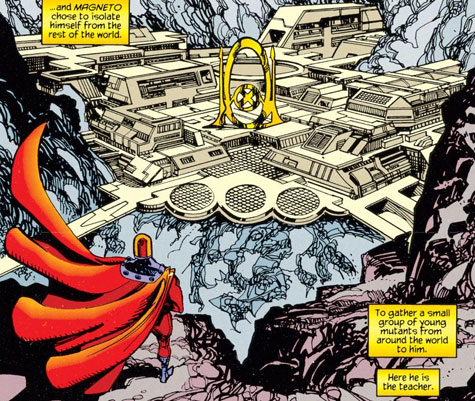 Magnus honors his deceased friend by following his dream of peaceful coexistence. Along with his son and daughter Quicksilver and the Scarlet Witch he founds the X-Men, and because of society’s ever growing hatred towards mutants decides to train them at a secret facility atop Wundagore Mountain. Right when his first team of students is capable of holding their own in battle, Apocalypse and his Horsemen launch their first attack on the United States. While Magneto and the X-Men do their best to defeat them, the school got attacked by Apocalypse’s son Nemesis. Left behind to guard the school and the many mutant children, the Scarlet Witch got killed by him. With her dying breath she made Rogue promise to always be there for her father.

In following years the X-Men and Apocalypse’s forces fought many more battles and new mutants join the ranks of both sides. During a direct confrontation between Magneto and Apocalypse Wundagore mountain was totally destroyed and the Earth’s magnetic field severely damaged, resulting in a change of it’s weather pattern and entire eco-system. In another incident Nemesis was mortally wounded by Magneto, and thus Holocaust was born. Nemesis, now nothing more than a body of energy, was forced to wear a containment suit and took the name Holocaust after swearing vengeance against Magneto.

Despite their many battles against the common foe, the X-Men experienced some inner conflicts – because of love. Weapon X angrily parted ways with the X-Men after they had been forced to leave Jean Grey behind in the enemy’s territory. Against Magneto’s direct order he tried and even succeeded to rescue his lover, though the couple would not return to the team. Additionally when Rogue finally chose Magneto over Gambit, the cajun left the team with a broken heart and starts his own group of thieves. Magneto found a way to counter Rogue‘s absorption power and after marrying they had a child. Magneto named the boy Charles after his old friend.

In the meantime humans had begun to evacuate from America and flee to Europe and Africa, to the lands of the Human High Council. Some humans like Susan Richards and Ben Grimm made it, while many others died trying. Moira MacTaggert and her husband Bolivar Trask, the inventors of the mutant hunting Sentinels that border of the human settlements, are both ruling members of an Eurasian Human High Council and they tried to rescue as many humans from America as possible. Apocalypse answered the humans by bombing Paris, the receiving site for the refugees, forcing the High Council to relocate to London, more explicitly the ruins of the clock tower Big Ben.

The only place still untouched by all this is a prehistoric land in the Antarctic. This safe haven is called Avalon and is under the guardianship of Destiny, who allows both humans and mutants to seek shelter. However they constantly fear detection by Apocalypse.

The crossover starts when Bishop, after twenty years of wandering, meets the X-Men and Rogue extracts images from another reality from his mind. Magneto begins to understand that this might be true timeline, and that the world they are living in is not how it was supposed to be.

On the next page you’ll find an overview of what the world looks like at the start of the crossover.