Nearly twenty years have passed since Legion changed the timeline when he traveled back to the past to kill Magneto and instead accidentally ended up killing his own father, Charles Xavier. Xavier’s untimely death meant he could not father Legion, nor found the X-Men. The small team that had followed Legion through time vanished into thin air. Only Bishop, a chronal anomaly himself, remained behind, though somewhat amnesiac and unsure of what really had transpired. However, another factor came into play to change the course of history; alerted by the incredible amount of mutant energies released in the fight between Magneto and Legion, Apocalypse decided to move along with his plans of world dominion in his Darwinist view over a decade earlier than he originally would have... 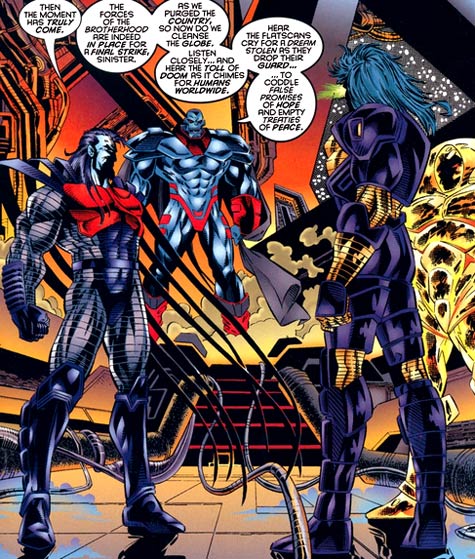 In this new world, Apocalypse and his Horsemen soon conquered the North American continent. On top of Manhattan, Apocalypse erected his huge stronghold, as well as the breeding pens where Sinister and his head scientist, Hank McCoy aka the Beast, could perform their twisted genetic experiments. Sinister’s foster sons, Cyclops and Havok, are part of Sinister’s Mutant Elite Force that patrols the breeding pens and the remains of New York. Across the country, the human population live in constant fear of the cullings. Many have fled to Eurasia, or died trying, which is ruled by the Human High Council, who have build hundreds of Sentinels to patrol their territory. A war between the opposing sides seems inevitable. Sinister thinks this madness. As a scientist, he would rather manipulate Earth’s population in general than have it killing each other. He betrays Apocalypse by tipping off important information to the Human High Council. Despite their enmity, he asks Weapon X and his lover, Jean Grey, to transport the data to Eurasia. 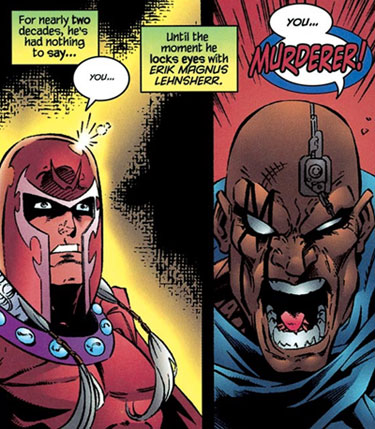 Now in his late forties, Bishop is constantly at odds with the world around him. With each passing day, he knows more and more that this is not how it is supposed to be, though he can’t remember why. Finally, after about two decades of wandering, he runs into the X-Men – led by Magneto and his wife Rogue. Seeing Magneto, Bishop becomes enraged and accuses Magneto of being a murderer, before he passes out. The X-Men think him insane, though Magneto knows there is more to him than meets the eye. He has Rogue touch him and a psychic backlash occurs, showing Magneto fragments of what reality was supposed to be. He realizes that despite he is considered a villain there, it would be a better world, and so he decides to try to restore the timeline. For that effort, three things are needed: a time-traveler; a piece of the M’Kraan crystal, functioning as a nexus to all of creation; and a precog, both to determine the truth of Bishop’s story and to pick the right timeline once they would travel back. [X-Men Alpha]