BIOGRAPHY - Page 5
Rachel wound up two thousand years later, in a dark future shaped by Apocalypse’s view on life as survival of the fittest. 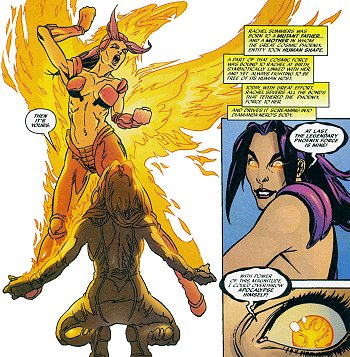 Here, mutants were the ruling class but Rachel found the oppressing system no different than that of the ‘Days of Future Past‘ timeline she was born in, only the roles of humans and mutants were reversed. To rebel against this system, Rachel founded the Clan Askani, which meant “outsider“ in the future language. She also tutored Blaquesmith, a disfigured boy with telepathic abilities, who, in time, would become Cable’s mentor. To defeat the power-stealing villainess, Diamanda Nero, Apocalypse’s vice ruler while he was in hibernation, Rachel was forced to purge the Phoenix Force from herself and infuse it to her opponent. Nero could not handle the universal force and accepted defeat. Rachel mentally commanded the Force to leave Diamanda and sent it to soar through space again. Inspired by this victory, the people believed in Rachel and, as her clan grew, the people started calling her Mother Askani. [X-Men: Phoenix #1-3]
Quite a few times, Rachel used her power of projecting her astral self through time to watch over her brother Cable, because she knew the important role he would play. She even planted the identities of the fabled Twelve in his mind. [Cable (1st series) #65, 71]
Having lived in the 20th century, she knew that one day Nathan, then still the baby boy of Cyclops, 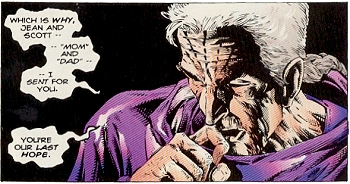 would be infected with the techno-organic virus. About eighty years after she ended up in this future, Rachel finally had succeeded in training one of her many followers in the Askani sisterhood to be able to timejump and bring the infected infant to the future. [X-Factor #68] At first, it seemed that the boy was dying and she ordered a clone to be made of the baby but both children survived. During an unsuspected attack, Apocalypse got ahold of the clone and raised him to be his heir, Stryfe. The very old Rachel could do nothing to prevent it and was mortally injured in the fight. [Cable (1st series) #6-8]

With her last strength, she managed to pull the astral selves of Scott and Jean to the future. Taking on the identities of Slym and Redd, the couple acted as parents for the young Cable and tutored him in the use of his powers for over ten years, while Rachel was lying in a coma, held alive 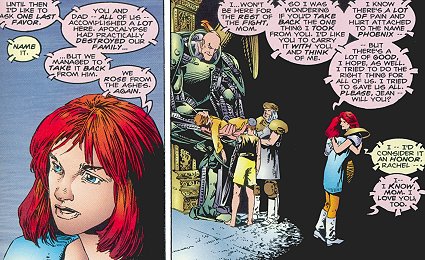 by machines. Shortly before she finally died, she established a mindlink with her brother and helped him to keep the techno-organic virus in check. Rachel’s last act before sending the Summers couple back home was the request of Jean to take on the codename “Phoenix,“ since, to her, a lot of good was attached to the name and she wanted it restored. [Adventures of Cyclops and Phoenix #1-4]
[Note: The outcome of the Twelve Saga and Apocalypse’s death in X-Men: Search for Cyclops #4 erased the Askani future as a potential future of the main reality. While Jean, Scott, Cable and other people who spent some time there, still remember the timeline, it did not happen for Rachel. She wound up somewhere else in the timestream; probably because her (dead) body was still in that future timeline in the instant it ceased to be a possibility of the present day. Rachel only retained some faded memories of her life as Mother Askani, but nothing else.] 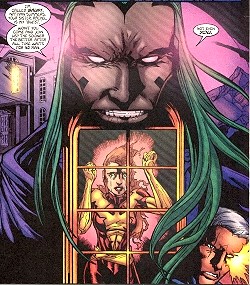 Rachel was hurled through the timestream towards the end of all time and, halfway through, she felt the Phoenix Force abandon her to reasons unknown. She washed up on an apocalyptic world and was held hostage by Gaunt, a man who had been imprisoned there for his crimes. She mentally contacted Cable for help and he traveled after her to save his sister. 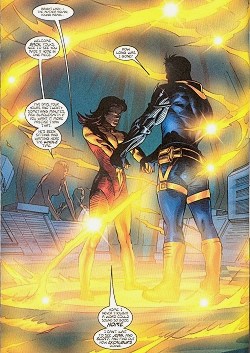 Cable challenged Gaunt to a duel to decide the fate of Rachel and emerged victorious, returning Rachel to the present with him. Rachel preferred that her return was kept secret from everyone else including Jean, while she tried to get resettled and attempted to lead a normal life. [Cable (1st series) #85-86]

While attending college, Rachel became aware of the Sisterhood rallying more hatred against mutants through an organization called SAM, students against mutants. She realized that she could not stand idly by and, after defeating the local members of the Sisterhood, Rachel met with Cable, who had been opposing the criminal organization for weeks. Together, they took out their leader, the Dark Mother, thus ending the threat. [Cable (1st series) #94-95]

Under circumstances unknown, Rachel was captured by the mysterious mutant predator Bogan and became his ‘pet telepath,’ someone through whom he could do his dirty work. In Bogan’s service, she infiltrated the Xavier Institute and messed with the settings of Cerebra and the Danger Room, so that Bogan could get his hooks back into a boy whom he wanted - Jeffrey Garret - as well as Emma Frost and some members of the X-Treme X-Men. Locked into a Danger Room sequence that was meant to replay

the events that had led to the murder of Jeffrey’s family (this time with X-Men and their students in their place), Storm was able to break Rachel’s - and therefore Bogan’s - hold on them, for, as Rachel tried to enter her mind, Storm gave her a nasty shock with the heightened electricity of her body. Still possessed, Rachel escaped. Even though the X-Men wondered how a stranger could manipulate Cerebra, nobody was aware it was Rachel, as she was entirely covered by shadows when she used her powers in Bogan’s service. [X-Treme X-Men #20-23] 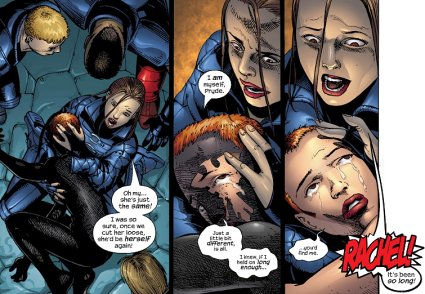 Bogan struck again and the X-Treme X-Men and Kitty Pryde tried to infiltrate his home in return. The team attacked Bogan’s creatures and together the X-Men could beat the telepath and cut her loose from Bogan’s control, finally freeing and recognizing Rachel as the shadows around her receded. [X-Treme X-Men #44]

Rachel stayed with the team for some time in Vallea Solada and bonded again with her best friend, Kitty Pryde. Without the true Phoenix Force and as a result of her ordeal, Rachel seems to manifest the shadow form whenever she uses her powers and, nevertheless, she has a tiny Phoenix symbol appearing over her left eye at the same time. When the X-Treme X-Men learned of the other X-Men’s battle in New York with a Magneto impostor and that Rachel’s “mother”, Jean Grey-Summers, had perished in the fight, the team returned home to help rebuild Xavier’s mansion and his dream. [X-Treme X-Men #46]