In the following weeks, the X-Men teams were re-organized, and Rachel became part of Storm’s group, the X-Treme Sanction Executive (X.S.E.), a kind of mutant police, whereas her best friend Kitty 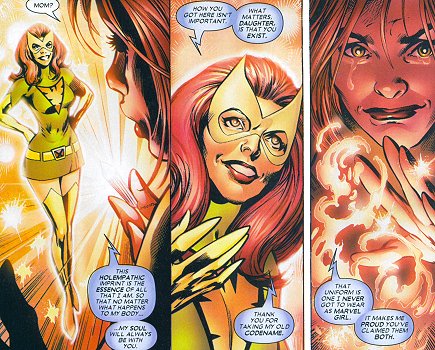 joined the squad led by Cyclops. Rachel decided to take on the name Marvel Girl to honor her mother and, though it isn’t her style, she has also adopted a green miniskirt costume similar to Jean Grey’s old dress as a homage - apparently Jean left it as a gift for Rachel, as well as a holo-empathic matrix crystal with Jean’s essence. Rachel also changed her surname from Summers to Grey, to show her disapproval of her ‘father,’ Cyclops, as she clearly despised his relationship with Emma Frost. [Uncanny X-Men #444, 447]

Shortly afterwards, Rachel paid a visit to her old Excalibur teammates, Captain Britain and Meggan, in England. As they arrived, she and several other X-Men ran into the powerful Fury, a cybernetic organism from Captain Britain’s past, which is programmed to kill superhumans. Rachel sustained injuries during the battle no human should have survived, 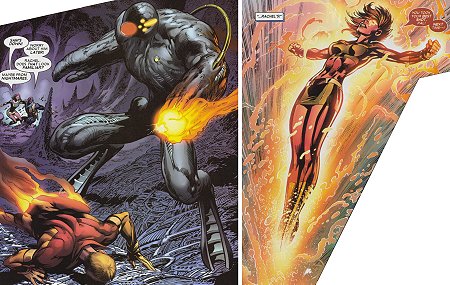 as the Fury tossed her into the middle of the ocean. Yet survive she did and proved the key to defeating the Fury, as with the help of her friends she used her telekinesis to trap the Fury in a miniature black hole. [Uncanny X-Men #445-447] Obviously Rachel was tapping into the Phoenix Force once more, though it is unknown how or why. It’s possible that the death of Jean Grey is the reason for Rachel’s restored link to the Force, which might also explain the tiny tattoo effect over her eye when she powers up. Whatever the case, it seems that, unlike before, Rachel isn’t the Phoenix’s host anymore but just drawing from its power.

Later, the team was kidnapped by the villain Viper for a grudge match and they were forced to confront the villainess without powers. Rachel did poorly in hand-to-hand combat, which is why she 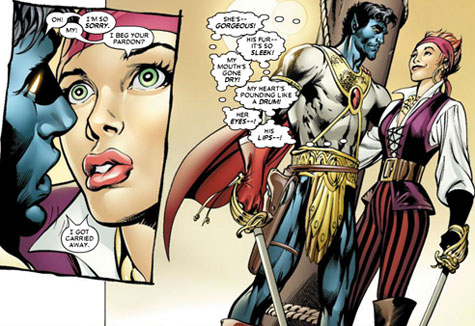 decided to take combat lesson from Nightcrawler. In the process of one such lesson, they both got carried away and kissed, suddenly noticing they were attracted to each other. Rachel, however, was also telepathically aware that Kurt was having feelings for their team leader, Storm, as well. Because of all the conflicting hormones and confusion, the spark of a relationship between Rachel and Kurt was never fully fanned. [Uncanny X-Men #448-450]

During a mission to infiltrate the revival of the Hellfire Club, Marvel Girl was placed in the distasteful position of following Emma Frost's lead, and posing as her "Warrior White Princess" while searching for Sage. Transported to a slavery auction in Hong Kong, Emma kept the proprietors' attention topside while Rachel snuck around the underground pens. While snooping, she met Red Lotus, who was helping the Hellfire Club break down the

slave ring. Their investigation was interrupted, however, by the arrival of the old Black Queen, Selene, who planned to make Rachel her bonded slave once more. Selene’s shadow energy ultimately proved ineffective, though, as Rachel's powers overwhelmed and dispersed the former Queen's essence. The slavers were captured, and Marvel Girl was forced to develop a sullen respect for Emma and her skills. [Uncanny X-Men #452-454]

Not long thereafter, at Christmas time, Emma attempted to make amends with Rachel by introducing her to her grandparents, John and Elaine Grey. [X-Men (2nd series) #165] She kept in touch with them and, when the Sentinels took up residence at the mansion after M-Day, Rachel took a vacation from the dark memories those robots evoked in her and went to stay with her grandparents at Jean's childhood home. 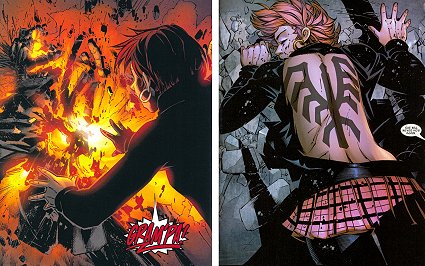 The Greys threw a huge party for her, inviting all of the various uncles and aunts and cousins Rachel never knew she had in order to meet her. She was having the time of her life up until her grandfather exploded in fire right before her eyes. Shi'ar Death Commandos raided the family reunion and, despite the X-Men's best efforts, eliminated the Grey family bloodline down to the last man, woman and child. Not only that, but they branded Rachel with the “mark of the Phoenix” on her backside, an unalterable genetic tag which would allow the Commandos to track her anywhere she went. Before they could administer the coup de gras on Rachel herself, however, the X-Men intervened and stopped the Shi'ar, placing them into O*N*E custody. [Uncanny X-Men #466-468]

In coping with her losses, Marvel Girl began testing O*N*E security around the mansion, breaking in and out at will. In addition, she began seeing the psychologist Maureen Lyszinski in Chicago, whom Shadowcat had recommended for her. The Death Commandos broke free of their confinement and came after her, tracking the brand on her back. Once again, Rachel fought against the Shi'ar alongside the X-Men, but despite several opportunities to kill her opponents, she chose not to. Though she wanted the Shi'ar dead more than anything, Marvel Girl chose to honor her family name instead of bringing more death to it. [Uncanny X-Men #469-471]

Soon after, Marvel Girl was chosen by Professor Xavier to accompany him and a group of hand-selected X-Men into the Shi'ar Galaxy, to deal with a rogue former X-Man named Vulcan, Rachel's long-lost uncle, 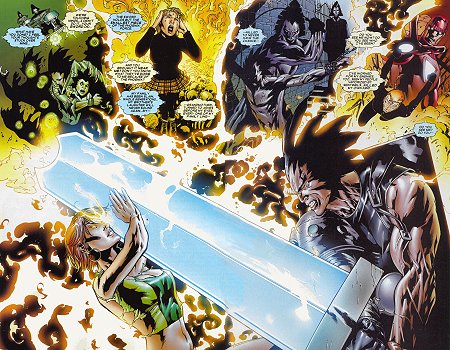 Gabriel Summers. During their travels through space, the X-Men encountered Korvus, another agent sent by the Shi'ar to eliminate Rachel and the Phoenix bloodline. Korvus was different, however - not only was he being forced into the assignment by the vice-chancellor, he also controlled a shadow of the Phoenix Force itself, through the Blade of the Phoenix which could only be wielded by him or his ancestors. When he first attacked Rachel, the Phoenix essence in her body and his sword merged, giving them a deep and intimate knowledge of each others' history. After Korvus was freed from the restraining device that was controlling him, he joined the X-Men in their pursuit of Vulcan. In addition, his psychic connection with Marvel Girl quickly developed into a romance between the two of them.

More than that, Rachel's brief connection with the Blade of the Phoenix seemed to change her - her power signature switched from the typical orange fire of the Phoenix to the blue shadow of the blade, and she 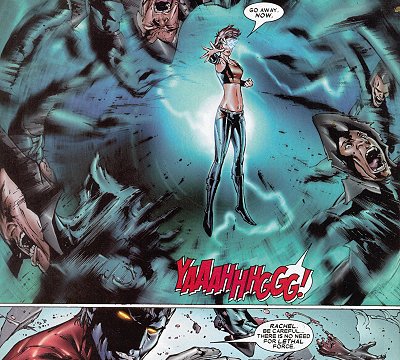 now seemed more than willing to kill during their battles with the Shi'ar, whereas she had previous foresworn using lethal force even against the Death Commandos.

As the Shi'ar Empire split in two, the X-Men allied themselves with the deposed Empress Lilandra and the exiled Major-General Ka'ardum in opposing the revived Emperor D'Ken and his royal entourage: Lady Deathbird and her new consort, Vulcan. When the two forces met in battle at Vulcan's wedding, however, he turned against D'Ken and murdered him, claiming the throne of the Shi'ar Empire for his own. During the battle, Xavier was injured, and Lilandra forcibly triggered the X-Men's jumpship to send her lover back to safety on Earth, leaving half of the X-Men, including Rachel, trapped in Shi'ar space. With Corsair dead and the civil war between the Shi'ar starting to rage, Rachel joined Havok, Polaris, and Korvus in becoming part of the new Starjammers, guiding the revolution against Emperor Vulcan and the Shi’ar forces under his command. [Uncanny X-Men #475-486]